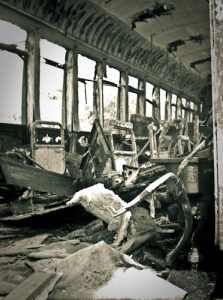 I woke up with feeling that I do not have legs under my knees, only some strange feeling, something between numbness and pain.

There was war outside going on, for last couple of months.

My legs under the knees were numb because I slept with my boots on, not that it was something unusual, I did that whenever I felt that there is big chance to be forced to jump from the bed completely ready, but mistake was that I did not ease laces a bit before I fell asleep.

Ceiling above my head was black because we used oil lamps for months, with bits of old laces dipped in oil. It smelled bad, and leaves nasty black greasy spots on walls, clothes, probably lungs too.

And finally my head was about to explode because again I drank some homemade booze last night during the trade with folks from 6th street. I remember that after we finish deal, guy from 6th street pulls a bottle somewhere from behind the back, and we all felt little bit more comfortable because something like old custom that you are not going to share drink with the guy who you want to kill or cross. Old habits.

Guy was banging on box of tomato juice cans yelling: “this is good first class stuff, it worth a lot, healthy for kids …” like he personally handpicked the tomatoes in Italy, and then make the juice in his refinery which is in his family for centuries… In reality that case was 3rd class stuff, probably bought some 100 kilometres from there on some bargain market and then brought to the dude through weird black market channels to be traded at 50 times its worth.

I was there with T. and after we traded some alcohol and baby food for that package of tomato juice cans, he saw some piece of machinery. It looked to me like big old part of car engine, completely not useful for anything.

But T. was obsessed with making homemade grinder that he could use for all kind of stuff.

“What do you want for this?” he asked.

“Oh , you see it is perfect for…for… you see you could use that for…” guy from 6th street tried to rise the price trying to discover for what T. is planning to use that piece of junk.
“I want to use it for making the grinder” T. said again, ignoring my leg signs to be quiet and let me finish the deal.

Finally guy from 6th street put big fat trading smile on his face, with more holes than teeth in his mouth.

We all were missing teeth in that time, but somehow always surprised me when I saw it on someone else. Funny and disturbing at same time. I did not want to confront T. in front of the guys because it was not smart idea. When you trade you must look and act confident, giving the other side clear picture that you are know what you are doing.

If two of us looked like we are not agreeing, or we have something to argue, or that we are not confident, other side could get the idea that we are weak. And that could be dangerous.

So T. traded some stuff for that thing. We drink some more stuff and went home.

Now, after I woke up and sat in my bed I was trying to remember how much tomato cans he gave back for that piece of machinery but I could not remember.

It was pretty dark in the room with all junk moved on windows and I started to carefully look for rifle. I had ritual of leaving my rifle always in same position next to my bed, at the reach of my hand, loaded and ready, but not too close to me.

I remembered stories about incidents with weapon, guy who slept with his loaded rifle next to him, so after his friend storm into the room and yell at him “Wake up! They are attacking” he panicked and blew his own feet into the pieces.

Other folks would do opposite things and store weapons at “secure place” so after someone attacked them they had trouble to “unsecure” it and make it usable. There were lots of funny situations in world where whole bunch of folks trying to shoot and fight but without too much previous experience with weapon.

I get up from the bed, and search my pockets for cigarettes. Could not find single one. Then I turn my pockets out and collect tobacco dust.
I found enough for one cigarette. In corner of the room I picked some paper from newspaper and roll one fat cigar.

While rolling dust in paper I checked what was printed on that piece of paper : “…and we must all be patient and do everything… some people want to use panic…I promise you…” some political bullshit from peace time. It looked so far away now.

I went out to the yard, pulling the small pieces of crap that would make cigarette taste bad from the cigarette, carefully watching to hold it in vertical position all the time, otherwise tobacco simply would go out from the cigarette in split second.

Skinny was on the balcony, doing something like watch, but in reality daytime was peaceful time in the terms of the surprises and dangers at the front door of our yard. He was just trying to catch some sun there.

T. was sitting on the old car wheel with screwdriver in his hands while small fortune of tools were around him. Old piece of steel that he traded last night was in his hand, he was trying to attach it to complex mix of stone wood and steel that he worked on for last few weeks.

“And how much food you gave up for that piece of shit?” (pointing at the steel) Skinny asked me.

“I did not give anything, he wanted to take it, he took it, he give it leave him alone” I said, at same time thinking that he gave that food for nothing.
T. put some oil on that part and continued to work, and talk to us:

“How long already are we living like animals? 4 months? 5? How dirty are we? All that we can do is to shoot, sleep and find food to eat?
Did you even try to really DO something? I am building something here.”

Skinny completely ignored him, he made “kids binoculars” with his hands (fists) and watched plane barely visible high in the sky. In last few weeks foreign fighter jets flew high in the sky, as a part of the effort to stop civil war under them. I guess the thought they gonna somehow scare folks and armies under them to stop fight with simply showing the force.

Only mistake in whole thinking was that they forget that they deal with Balkans. We slaughtered each other here for centuries with unbelievable rage, and then lived together in big love with silenced hate. No too much sense.

Most of the folks watched those jets like they are some kind of magic or not even real.

Interesting and maybe dangerous magic, but far away and in some other dimension. Much bigger transport planes flew at night, throwing food for us, in the form of MREs (we called that “lunch packets”).

Skinny still looked at fighter jet high in the skies, and asked me “how high you think they are flying there?”
“Why you ask?” I said.
“I just ask”.

I kept looking at him suspiciously, because I remembered our neighbour who stated (OK he was completely drunk) that he had brilliant plan to end this siege. When we asked him how, he explained that he will shoot at the airplanes, and when they respond to that they will bomb whole area and everything will end.

One of most stupid things that I ever heard. It was like shooting the man who brings you sandwich when you are hungry but desperate folks will talk lot of nonsense.

“I am just thinking how funny and how far away we are to that pilot up there. He looks down and sees some buildings and smoke, some shitty place, and then 15 minutes later he is out of the whole area, going home, or wherever out of this mess. Can you imagine how cool is that to be out from here in 15 minutes?” he asked me.

We were here, and thats it. I learned or trained myself to live and think only for today or only few days into the future. I learn not to hope too much.
Hope can be shitty thing when it proves to be false.

In first period we all thought like “oh this is temporary” or “someone gonna solve this” pretty soon people realize that nobody gives a damn about us, and that we are on our own.
After that realization some folks just lost touch with reality, some else use their skills, brain or imagination to survive.

T. always was doing some projects, trying to make things easier, to create tools for easier living. Usually it was useless. Skinny was dreaming all the time, about when “all this come to the end” and “what if” scenarios.

I learned to stay in present moment. Each one of us had some kind of mechanism of coping with new reality.

Later that same day guy from the neighbourhood came with info that chemical gas was used in one part of the city from some unit so we pretty soon forgot discussion about planes and everything.

And what about the project that T. Was trying to finish?

Yes he actually made it, he did made some kind of grinder, but much later. And funny thing was that few days after he finished that siege was over, so there was no need for that anymore.
Maybe he was building that grinder so slowly with purpose to keep some sense for him, I do not know.

How to convince someone about prepping

Best Off Grid Generators For Preppers (That Use Fuel)

1 thought on “A Typical Day During SHTF”