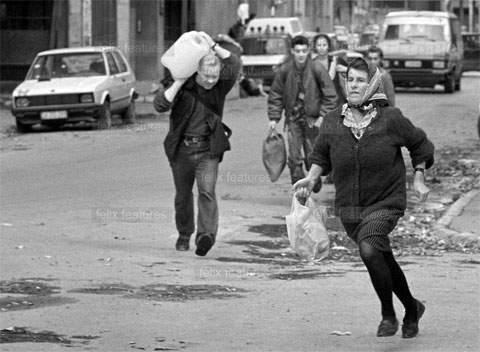 SHTFplan Editor’s note: Our friend Selco at SHTF School will change everything you may think about your life in a post-collapse world. For many of us, the idea that the world around us may fall apart and lead to the worst that humanity has to offer is mostly theoretical. For Selco, it was a reality. He experienced a total grid-down collapse in war-torn Sarajevo during the 1990′s – and he lived to tell the tale. He has shared his knowledge with our community over the last few years, and in the article below he changes our perceptions once again. Just because we are making preparations – stocking food, or supplies or guns – means nothing if the mind is not prepared to comprehend the absolute horrors that may come.

Do you want to know what it will be like when law and order breaks down, when people turn on each other, and when there is no one to depend on except for those in your inner circle?

Walking the Line Between Human and Animal


As many long term readers or members of my survival course know, I like to talk about the important but what some may call the “not so spectacular” part of survival that is not as much fun as, for example, talking about latest guns and gadgets.

Today I want to talk about dignity and what it means in a survival scenario. Before I talk from own experience, read the extract below from the diary of Lieutenant Colonel Mervin Willett Gonin who describes what happened after his unit freed the Bergen-Belsen concentration camp during the second world war.

At the moment of his writing hundreds of people were still dying and it was place of pure horror.

It was shortly after the British Red Cross arrived, though it may have no connection, that a very large quantity of lipstick arrived. This was not at all what we men wanted, we were screaming for hundreds and thousands of other things and I don’t know who asked for lipstick. I wish so much that I could discover who did it, it was the action of genius, sheer unadulterated brilliance. I believe nothing did more for those internees than the lipstick. Women lay in bed with no sheets and no nightie but with scarlet red lips, you saw them wandering about with nothing but a blanket over their shoulders, but with scarlet red lips. I saw a woman dead on the post mortem table and clutched in her hand was a piece of lipstick. At last someone had done something to make them individuals again, they were someone, no longer merely the number tattooed on the arm. At last they could take an interest in their appearance. That lipstick started to give them back their humanity.

The importance of still being human and not becoming a complete animal is often overlooked for people who prepare for long term survival. I had over one year to fight against becoming like rats around our house during the war.

You can have all equipment ready for SHTF – ammo, weapons, gear… you can even be perfectly well trained in lot of different skills and fields and still when SHTF you can end up dead in the first days just because you “refuse to believe” what’s happening.

It is that state of mind when a man simply does not want (or is not able) to comprehend the new situation.

It can be one quick life threatening situation like folks attacking your home and you just waited few seconds too long to shoot some attacker, and then you are dead, end of the story. Or it can be whole process of failing to recognize the new world around you and the new rules (or absence of rules) and then again you just not doing correct things for the situation, and again you end up dead.

Example would be that when SHTF you are trying desperately to have and use power generator and light all rooms in your houses just because it mean normal life for you. And that normal life is gone, and trying to bring it back in that situation usually means more troubles.

Holding on to all the comforts and behavior you are used to can be dangerous.

To make a long story short, what I am trying to say is that you may be trained and equipped like a SEAL team member and yet you can still be killed easily from some 70 years old dude, with even older rifle just because you were surprised when SHTF with amount of destruction and violence and you did not seen that old dude coming (or being so evil).

On the other side that old dude maybe lived through couple of SHTF events in his life, and he knows when it is time to act without hesitation and mercy.

There is still a fine line you have to walk between losing your human side and becoming pure animal.

One of the things that changed a lot when SHTF is fact that everything became really dirty.

It was something like slow process, first people tried to keep it as clean they could, but without all normal services, like garbage trucks, running water and all other community services that make normal living soon it simple became impossible.

Later all garbage was used somehow, but in beginning it started piling up everywhere, when you add to that ruins on the street, human waste and dead bodies it was very ugly picture.

After some time, we started to accept dirt outside and it then was priority to stay clean and keep clean only inside that small circle inside your home, and when I say „clean“ I do not mean „clean“ like today. Maybe as clean as we could be.

For example simply moving through the city in the middle of the night meant that you needed to crawl, jump, hide, walk or run trough all kind of things, and very often some real nasty and dirty things.

Many times I was hiding on places so dirty that stench was almost paralyzing, once in the middle of the night I jumped behind some wall because sudden shelling, and when I jumped there I realized that I landed on dead guy.

His face was smashed with broken wall, and partially buried, place there was so small that I had to actually lay on him for some 20 minutes. He died probably when wall from the house collapsed after some shelling, who knows.

Fire from the shelling was so strong that I actually loved that dead guy and that place in that moment. I almost hug him while I was trying to be as small as possible because pieces of steel and rock were flying around me just like some crazy rain, while my stomach was rising and floating from the detonations and smell.

Today years and years later I still carry that smell inside my nose. But I did not move from there before danger was gone. It is survival and luckily I was already used to dirt enough to just stay with that dead guy.

Some folks just stopped to care about cleanliness and hygiene completely. So for them washing and cleaning become something like not wanted luxury. They went complete animal.

They simply stopped to care about these things, so I also knew some guys with look and smell so awful that even dead guy smelled like perfume store.

It was easy to surrender to stuff like that, I mean in trying to keep yourself clean.

For me being as clean as I could be had something like preserving one of the last connection with “normal” life, with life before sh!t hit the fan, when things like neighbors, breakfast, car etc, were just things we took for granted, like things that always gonna be there unchanged.

Of course I was aware that being clean is important in order to stay alive because all diseases problem, no doctors hospitals etc. but on some psychological level it kept me sane and it kept me normal man.

Even in survival situation you need to still care about few little things to keep your dignity, to keep spirit up, to not lose yourself. If you stop caring about everything it is like disease that eats you.

When I came back from trading or scavenging in the city, I would clean or wash myself thoroughly in my yard before entering my house, again of course because common sense, hygiene and diseases, but maybe even more important I tried to keep all chaos and violence, suffering outside of my home on some psychological level.

I try to stay out of the everything, or actually I tried to keep everything outside of my home, like some ritual. I would keep the clothes for outside in bag, my boots were in one corner, never entering my room in it etc.

One of my relative wears pink slippers (mittens) when he was home sometimes, he would say that he just felt that everything is fine when he wear it. It was spooky and strange to see him in pink slippers while outside world is going to hell, but we all have some strange ways I guess to keep ourselves sane. Maybe wearing those slippers after he was forced to shoot some folks kept him sane, reminded him on some normal times when grandma wear it in the evenings.

On the other side, like I said in beginning if you stick too much to old habits you are not doing best for survival too.

So if I had to be animal, I was animal. It was about survival. For example there was a period when I eat just to survive, like animal, without paying attention what I eat or how. If I found some food I ate it in quick way, if there was some food with worms in it, I would eat it in dark, without looking what I eat etc.

Point was (and still is) to be man, but to be ready to be animal if you are forced to be animal, and that’s it. It comes down to being flexible, adapting to situation and I hope this helps to crush the idea some Hollywood or fantasy survival scenarios show that survival is about being complete animal. No, it is fine line to walk.

You can (and you have to) have as much hand sanitizers, soap, disposable face masks etc. as you can but you can still end up dead if you are not ready to accept fact that one day you might be forced to „hug“ dead guy in order to survive, or eat roast rat or pigeon.

Once next collapse comes many people will wake up to reality and struggle to be human like they were or become animals and as skilled survivalist I hope you will walk fine line in between. The people who were walking that path were and I’m sure will be those who have biggest chances to survive.

You can follow Selco’s story at SHTF School and learn how he survived one year in hell.

Taking Care of Small Children and Babies in Survival Situation