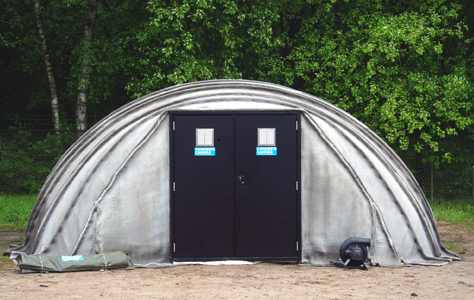 I’d imagine some of you who have recently served in the military may have seen these Concrete Canvas Shelters (CCS) but they’re new to me so I thought I would share them with you. In fact, it was my eldest son (he’s only 11) who pointed them out to me… no idea how he found out about them but he loves everything “military” so I’m sure he was searching YouTube.

Anyway, these CCS shelters have been around for a handful of years or so and appear to have found their way into military applications but I immediately saw how useful such a structure might be for preppers. Here’s some highlights from ConcreteCanvas.com:

– Operational: CCS enable a hardened structure from day one of an operation. They provide much better environmental protection, increased security and vastly improved medical capability.

– Financial: CCS have a design life of over 10 years, whereas tents wear out rapidly and must then be replaced. CCS are a one stop solution, saving effort and cost over the lifetime of medium to long term operations.

The key to CCS is the use of inflation to create a surface that is optimized for compression loading. This allows thin walled concrete structures to be formed which are both robust and lightweight.”

Watch this video on setting one up as well as important characteristics I’ll reiterate below:

As you saw in the video, once you have the shelter where you want it, setup is relatively straightforward. Granted, you’re going to need a few things to make it happen, including the ability to lay it out flat (probably using a vehicle), a generator to run an fan in order to inflate the shelter, and water (probably under pressure) to saturate the canvas so it hardens. According to the video the shelter will be operational within 24 hours.

The video also says the shelter can be covered in “earth, sand, or snow providing an excellent thermal performance” and offers significant protection from small arms fire and fragments. In fact, I think they recommend you berm the structure to offer such protection. Beyond that, the CCS is even 100% fireproof since it’s made from some sort of ceramic. Moreover, the plastic inner is apparently a sterile environment too. Finally, it seems you can even link more than one shelter together to form an even larger structure. Now that’s cool!

They also make concrete cloth that’s not intended to be a deploy-able shelter as shown above but, rather, for other purposes. Here’s a few ways the military has utilized Concrete Canvas to harden their defensive structures, shore-up failing walls, slopes, and more (just watch the first two minutes):

Pretty cool, huh? I thought so. I never could find any pricing info… seems they want you to contact a sales rep which is code for “they’re probably expensive.” Perhaps someday they’ll be a great and affordable option for the rest of us.

Why Are So Many Wealthy People Building Futuristic High Tech Security Bunkers?

HOW TO BUILD A BUNKER: SURVIVALIST GUIDE TO BUILDING AN UNDERGROUND SHELTER

Living Inside An Organic Shelter

How Would You React?