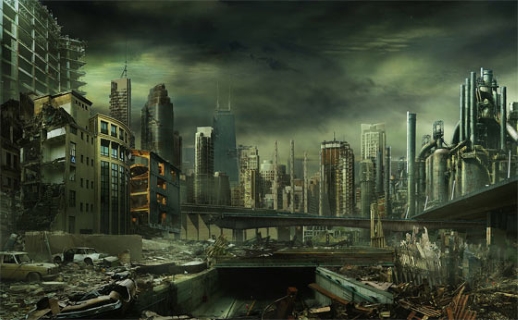 Here is one possible outcome for those living in the cities following a full-on SHTF collapse:

After TSHTF, Gangs may become the Number One problem in cities of any size. The gangs may take over a city very quickly starting with their own blocks and neighborhoods. Their numbers may grow very rapidly as those desperate for water and food will become their “new recruits” and may join for their own survival.

The gangs may become a formidable wrecking force for a number of logical reasons, and might be the downfall of many who are preparedness-minded while still living in the city…

Re-posted for your fresh input:
Gangs already rule the dark ‘underground’ of today’s cities. When TSHTF they will be unleashed and unbounded, enabled by the chaos that will become the new reality.

During this time, most law enforcement officers will be more concerned about the safety and well-being of their own families in their homes, and will likely choose to stay and defend their own property instead of leaving it behind to “go to work”.

People living in cities, or even the immediate population-dense suburbs, will be subjected to a very cruel and unusual environment. They will be HIGHLY at risk from foraging gangs.

The thing is, even in good times (today?) the gangs are armed with weapons, have honed their criminal skills, and are not afraid to use them. Can you imagine this after TSHTF?

Gangs WILL rule the cities.

Most of us living our lives today do not see the underworld, the underbelly, the gang and criminal activity lurking beneath the surface, the drugs and dealings… They cleverly hide it, and it lives largely in the shadows of our streets. If you know what to look for, you can find it and see it, but most do not as they are too busy texting, tweeting, or talking on cell phones as they blindly travel the streets.

It will be a shock when it happens – when the $hit hits the fan.

Many preppers and/or preparedness-minded people living in the dense population of the city or suburbia believe that they will stay put and make it on their own after TSHTF. This will NOT be the majority case in my opinion. Confronting or evading a roving hostile foraging gang may be suicide or impossible for most.

It’s all about the numbers.

It will take clever planning, particular assets (which will be running out), and ‘enough of you’ (an adequate number of you) to deal with this threat. If you do not have overwhelming numbers or overwhelming defensive measures and/or protection, you will be wise to choose a plan that avoids direct confrontation altogether.

Here’s one idea: Move out of the city before the SHTF. Move out of densely populated suburbia.

The things is, we’re living in a bubble. A cocoon. We have a very false sense of security that has only existed for a VERY small slice of time on the timescale of human civilization. We are living in a technological fantasy world of sorts. Our sense of security could be blown out of the water in an instant. Be aware of where you live and whether or not you will be in immediate danger of gangs who will TAKE your food and supplies (and worse) as they feed their needs to survive after TSHTF.

We must accept that ‘if’ the $hit hits the fan, that gangs will probably become your worst nightmare. And these may not be the stereotypical gangs that you visualize in your mind… they will include hoards of desperate people willing to do anything to survive.

Don’t say I didn’t warn you…
What’s your opinion about so called ‘gangs’ ruling the cities after collapse? Will this element organize enough to become a substantial roving threat? Will they remain in smaller groups as they forage through the city for supplies? Will a single household stand a chance against this element?