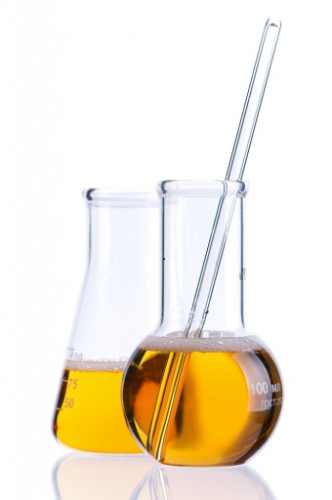 It turns out that something that is (usually) flushed down the toilet can actually be recycled into a number of useful products. Comprised of water, calcium, chloride, potassium, sodium, magnesium, urea, creatinine, nitrogen, uric acid, ammonium, sulphates and phosphates, urine’s beneficial ingredients can be separated from its waste, and used to make fertilizer, medicine, brain cells and, yes, gunpowder.

Why Do We Pee?

Fundamentally, the function of peeing is to remove waste from our bodies. As blood travels through your various organs, systems and structures, each cell deposits the waste from its metabolism of nutrients back into the bloodstream. In a well-functioning human, about 20% of the blood flows through the kidneys every minute; within the kidneys, millions of nephrons (tiny filters) clean the blood.

During this filtering process, a number of beneficial ingredients in the blood, like glucose, water and sodium that were filtered through the kidneys, are put back into the bloodstream. The rest is secreted out of the body in the form of urine; this pee, however, still contains some handy chemical elements like potassium and magnesium, as well as urea and nitrogen.

Throughout history, some smart and adventurous people with strong stomachs have devised a number of ingenuous uses for their pee.

Gunpowder is comprised of 75% potassium nitrate, 15% charcoal and 10% sulfur. While charcoal (historically made with wood) and sulfur (historically dug from the ground around volcanoes) have been relatively easy to obtain, potassium nitrate is not commonly found in nature. Early sources were found in caves where guano (bat poo) had combined with minerals from the cave walls; soaking and filtering the guano was an effective method, but there are only so many caves, and so much bat poo.

With an increasing need as gun warfare became more common, by the time of the U.S. Civil War, men were manufacturing potassium nitrate in huge amounts. One process, known as the French method, involved mixing manure with ashes, straw and urine; the mixture would be tended for many months, perhaps even a year, then filtered through more ashes and a bit of water. A second process, called the Swiss method, involved placing a sandpit directly under a stable; only the urine made it into the sand, which would be harvested and filtered in the same manner as the French method. Either way, it had to be a tough job.

Survivalists and gun enthusiasts today enjoy (well, maybe) making their own gunpowder. For the potassium nitrate, one recommended process is to put a lot of manure in a large drum with a drain, valve and filter screen installed at the bottom. Pee into it. Freely. Then add water for a total of about 300 gallons of yuck. Place it in a safe spot (far away from the house, if possible). After 10 months, pour it out onto shallow trays to dry.

Separately with a mortar and pestle or hand-cranked mill, grind charcoal (all natural, no Match Light) to a powder and set aside. Do the same with sulfur, which can be purchased in home and garden stores. Finally, grind the potassium nitrate. Experts warn not to grind the ingredients all together, since that would possibly explode in your hands.

For storage, the best minds suggest mixing the three powders together then adding a little stale urine so the mixture has the consistency of biscuit dough.

High in nitrogen, human urine is an excellent fertilizer. Some sources report that, absent fecal contamination, your pee is sterile; finding this hard to believe, others recommend storing pee for six months prior to use, rather than peeing directly on your garden soil. Of course, do not use the urine of anyone who has a urinary tract infection or is taking a medication. Although some use pee to fertilize fruits and vegetables, it is recommended that it not be used around root vegetables. Experts recommend using your high nitrogen urine only about once or twice a month, as too much nitrogen can reduce yield and hurt the plants, in the extreme case even killing them.

Really? Really. Recycled since ancient times, many cultures have found medicinal uses for pee. Hindus traditionally applied urine to the skin as a dermatological treatment, and the Chinese used it to treat wounds. In ancient Rome, it was used to whiten teeth, and in Auyervedic medicine; it has long been recommended as a cure for cancer. More recently, the French used it as a cure strep, by wrapping pee-soaked socks around their necks.

Alternative medicine fans today are increasingly drinking their own pee. Called urine therapy, it is based on the idea that a number of beneficial nutrients found in pee, like enzymes, vitamins and antibodies, are needlessly lost when you go. Among the many health benefits adherents claim urine helps with are cures for heart and autoimmune diseases, infertility and cancer.

Making an end-run around the embryonic stem cell debate, a few ingenuous scientists have found a way to make neurons out of human pee. Actually transforming a few ordinary cells found in urine into neural progenitor cells. This new pee-technique takes only half of the time of other pluripotent stem cell making methods.

Applying another process, the neural progenitor cells turn into functional neurons in short order. When inserted into baby lab rat brains (express your outrage in comments) ;-), the pee-generated cells operate properly and do not produce tumors. It is anticipated that this new method can be expanded to create other kinds of cells, and that eventually, these pee cells will be used to treat a number of different human conditions.

When you think about, it’s not that weird. You eat healthy food and drink plenty of water, so it makes sense that your pee might have some good things in it. Perhaps the next time you have to go, consider walking out to the garden and returning some of nature’s building blocks back whence they came.

28 Other Ways Toothpaste Is Best Used

How to Turn Ordinary Water into That Goes KABOOM!

How to maintain optimum health and prevent disease