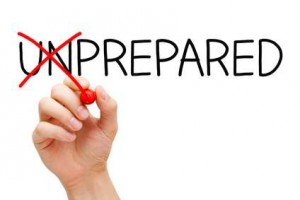 When the tornado hits or the flash flood breaks loose, your preparation time is over. If you haven’t prepped by then, you’re out of time. You might have food and water stored away, but what about communications? In 2005 both land lines and cell towers were down for days in New Orleans during the Hurricane Katrina aftermath. Preparedness means your family can survive until help arrives or the disaster ends. If you’re counting on your cell phone or land line to get you there, you need to revisit your plan.

Old-fashioned land line phones are hardwired through a series of cables. The oldest version of this system is through a series of copper wires, but the newer ones today work on fiber optic cables or VoIP systems. Cell phones, on the other hand, are actually elaborate two-way radios. They broadcast their signal and bounce it off a series of cell towers, which are really just very tall antennas. Both systems allow sound to travel over long distances, and both rely on their physical support system to make them work.

What Could Go Wrong

Emergencies and natural disasters come in all shapes and sizes, and each one has the potential to knock out one or more phone systems. Flash floods and earthquakes have the potential to ruin the underground cables that carry land line communications, especially those with the newer technology.

Cell systems are even more vulnerable. Tornadoes, hurricanes and earthquakes can knock down cell towers, as can severe blizzards and ice storms. In addition, if the power goes out for any length of time, cell phone batteries will die without an alternate power source for charging.

The first thing to put in your emergency kit is an alternate source of phone charging, such as a solar charger or a portable battery-run charger. In case the electricity is the main emergency, you’ll still be able to communicate with family members, as long as the cell towers are clear. For more severe emergencies and natural disasters, the smartest option is a satellite phone like the iridium phones from Roadpost.

Satellite phones work by bouncing a signal off a satellite that orbits the Earth, instead of a cell tower on the ground. Since natural disasters and civil emergencies don’t affect objects in space, a satellite phone will always be available for emergency communications. Your call recipient must also have a working phone in order to receive calls, of course, so it’s a good idea to outfit all adult family members with their own working satellite phone, especially if there’s a chance that your group will be separated. Add a solar charging station to make sure the battery is topped off, and you’ll have complete emergency communications during any natural disaster.