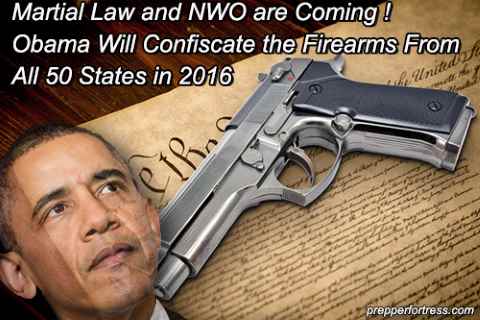 Since becoming president, Obama has been on a mission to overturn the Second Amendment, and take guns away from Americans forever.

This video explains why the 2nd Amendment is so important. You will see many similarities as to what is currently happening in the US.
Democide= When the government kills its own people. Registration leads Confiscation.
Confiscation leads to extermination.
Throughout history, every communist government has disarmed its people, marginalized a specific group of people, and millions have been slaughtered as a result.
The current administration has the US heading down this same path. Gun control laws do nothing to save lives. By definition, criminals do not obey laws. These laws only affect the law abiding citizens, rendering them defenseless. We have an inalienable right to defend ourselves from all enemies, foreign and domestic.

‘For decades I have heard gun owners claim that the government would never be able to confiscate our firearms because the government would lose too many men.  The implication being, of course, that gun owners would actively resist confiscation, even to the point of shooting back.  But I believe this thinking is outdated and doesn’t align very well with reality.  But before you tell me how big your honor guard in Hell will be when that day comes, let’s think about how the government could really do it.

Suppose, for the sake of argument, the government bans all civilian possession of firearms at the end of this month.  Congress passes a total ban and the President cuts his own re-election throat by signing it.  Gun owners get some grace period to turn them in, even beyond the deadline, without being charged with a crime.  If we use Australia and Britain as examples there will still be a significant number of firearms that are not turned in.  Some estimates put the Australian turn-in at less than 25% and the British faired only about 28%.  But Australians and the British have long been used to obeying almost every gun control law. Not so the Americans. When laws are passed that we don’t like, we bite. We scratch. We vote.  So here we sit after the guns have been collected and the amnesties have run out.  Now what?  Send out the personnel carriers, swat and shock troops to seize the guns from those militia “terrorists” who refused to turn them in?  Don’t be silly. 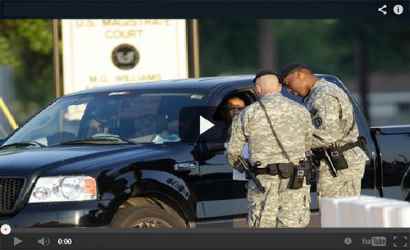 The government has lots of records about you. If you purchased a firearm since 1968, chances are that they have some record of it somewhere.  Most likely, it will take quite some time for them to compile all the serial numbers of “surrendered” guns (surrendered essentially at gunpoint) and cross off the ones you turned in.  It’ll take more time for them to attempt to “clean up” their data.  Say, about two years, maybe three. Add to that the hordes of people keypunching in hundreds of thousands of sales and registration records from hundreds of gun stores forced out of business.  At some point the government decides they have something approaching a “good” database of unaccounted-for guns.

The next thing you’ll get from the government is an official looking notice that they think you still have a firearm. Their information will probably include all the information from registration forms, right down to the serial number.  That notice will tell you that you’re in violation of the law, subject to prosecution and imprisonment.  It will give you some period of time to surrender the gun.  It will also give you a very limited number of days to return the form with an explanation of why you don’t have the gun, any proof you have, and your signature that the gun was lawfully disposed of.  For many people the idea that the government “knows” they didn’t turn in that pistol or rifle and they have the detailed information about it will be enough to get them to surrender the gun. Some people will ignore the letter, others will scrawl a note that “I sold this in 1982 in a private sale”. After some time, the government will figure out how many guns are still out there and what the “compliance rate” is with the gun ban.  More importantly, they’ll start sorting their database by the number of guns someone supposedly has “unaccounted”.

If you think they’ll come at these multiple-gun owners with a swat team, guess again.  Their most likely tactic will be yet another letter (maybe two more) that generate what they’ll call “insufficient responses”.  That means they can’t track a gun after you owned it.  This they’ll use as fodder for a search warrant and/or perjury charges at a later date if they can.  My guess is that the time between April and August will be a bad time for a lot of “former” gun owners. Remember that the BATF is an arm of the Treasury department and they control the IRS. You’ll probably get a notice in the mail that the IRS has some questions about your taxes or wants to audit you.  When you make the appointment to visit the IRS they will pass that information to the BATF. While you are sweating over your deductions, the BATF and local police will execute a search warrant and search your home looking for guns.’ (source)

As we approach that critical tipping point where state by state and then nationally, the citizens of this nation are ordered to turn in their firearms, the signs will be evident. This progression toward tyranny is always punctuated by the disarming of the population. This necessary step in the elite’s movement toward total global domination is well documented around the globe and occurring as I type within the US. Many refer to this evil cabal and their agenda simply as the New World Order. The armed population of the US is one of the few remaining hurdles the New World Order must overcome to institute their final tyranny.

What is the New World Order ?

“A One World Government and one-unit monetary system, under permanent non-elected hereditary oligarchists who self-select from among their numbers in the form of a feudal system as it was in the Middle Ages. In this One World entity, population will be limited by restrictions on the number of children per family, diseases, wars, famines, until 1 billion people who are useful to the ruling class, in areas which will be strictly and clearly defined, remain as the total world population.

There will be no middle class, only rulers and the servants. All laws will be uniform under a legal system of world courts practicing the same unified code of laws, backed up by a One World Government police force and a One World unified military to enforce laws in all former countries where no national boundaries shall exist. The system will be on the basis of a welfare state; those who are obedient and subservient to the One World Government will be rewarded with the means to live; those who are rebellious will simply be starved to death or be declared outlaws, thus a target for anyone who wishes to kill them. Privately owned firearms or weapons of any kind will be prohibited.”

Another way in which the global elite plan to carry our their scheme is adding certain chemicals to our foods that result cancer and poor health.Their intention is to effect complete and total control over every human being on the planet and to dramatically reduce the world’s population by 6.5 Billion people to 500 million. While the name New World Order is a term frequently used today when referring to this group, it’s more useful to identify the principal organizations, institutions, and individuals who make up this vast interlocking spiderweb of elite conspirators.

“War and famine would not do. Instead, disease offered the most efficient and fastest way to kill the billions that must soon die if the population crisis is to be solved. AIDS is not an efficient killer because it is too slow. My favorite candidate for eliminating 90 percent of the world’s population is airborne Ebola (Ebola Reston), because it is both highly lethal and it kills in days, instead of years. We’ve got airborne diseases with 90 percent mortality in humans. Killing humans. Think about that. You know, the bird flu’s good, too. For everyone who survives, he will have to bury nine.”
– Dr. Eric Pianka University of Texas evolutionary ecologist, recommending solutions for reducing the world’s population to an audience on population control.

FEMA is the Trojan Horse by which the New World Order will implement overt, police-state control over the American populace.

1 thought on “Martial Law and NWO are Coming ! Obama Will Confiscate the Firearms From All 50 States in 2016”