The Book of Revelation, the most terrifying and controversial book of the Bible, was written by an exiled prophet almost two thousand years ago. The final chapters of the New Testament describe mankind’s violent end of days – a seven-year period of unparalleled death and destruction. Jesus breaks seven seals that unleash three waves of devastation – natural and man-made, from the sky and from deep within the earth. The Antichrist will rise. Pestilence, famine, war, and natural disasters will purge humanity before Jesus returns for the final battle between good and evil. But who is the Antichrist? Who will survive God’s wrath? And when will this apocalypse happen?

The first seal Christ opens reveals the first horseman of the apocalypse. The first four seals reveal a total of four horsemen.

“And I saw when the Lamb opened one of the seals, and I heard, as it were the noise of thunder, one of the four beasts saying, Come and see. And I saw, and behold a white horse: and he that sat on him had a bow; and a crown was given unto him: and he went forth conquering, and to conquer” (Revelation 6:1-2).

Christians usually assume this horseman is Jesus Christ because Christ also comes on a white horse. But Christ comes with a sword, not with a bow (Revelation 19:11-15).And when you see what this white horseman actually does, you realize that even though he looks like Christ, it isn’t Christ at all! This is a false Christ who has DECEIVED THE WORLD—the Christian world and the non-religious—about the prophecies of Revelation!

Here is what Revelation says about the second seal: “And there went out another horse that was red: and power was given to him that sat thereon to take peace from the earth, and that they should kill one another: and there was given unto him a great sword” (Revelation 6:4). The second seal reveals the horseman of war.

What did Christ say about this in the Olivet prophecy? “And ye shall hear of WARS and rumours of wars: see that ye be not troubled: for all these things must come to pass, but the end is not yet” (Matthew 24:6). There will be all kinds of wars from the first coming of Christ to the Second Coming—but those right at the very end before His Second Coming will be about 100 times worse than any ever on this planet! That is what Christ is telling us.

This is the same period that the Prophet Daniel called “the time of the end”—or as the Moffatt Bible translates it, “the CRISIS AT THE CLOSE.” It is the worst crisis ever on this Earth! We ought to take note because it is already beginning to unfold before our eyes. Look at all the countries that have nuclear bombs and are ready to detonate them. Once you start a nuclear war, you can’t really stop it.

The third seal is described in verses 5-6: “And when he had opened the third seal, I heard the third beast say, Come and see. And I beheld, and lo a black horse; and he that sat on him had a pair of balances in his hand. And I heard a voice in the midst of the four beasts say, A measure of wheat for a penny, and three measures of barley for a penny; and see thou hurt not the oil and the wine.” Seal number three reveals the horseman of famine.

“And I looked, and behold a pale horse: and his name that sat on him was Death, and Hell,” or the grave, “followed with him. And power was given unto them over the fourth part of the earth, to kill with sword, and with hunger, and with death, and with the beasts of the earth” (verse 7). The fourth of these seven seals is the horseman of death.

Verses 9-11 of Revelation 6 describe the next of these seven seals. This passage begins, “And when he had opened the fifth seal, I saw under the altar the souls of them, that were slain for the word of God …” (Revelation 6:9). This is discussingGod’s own people—people who knew God and the true gospel—being killed.

Why were these saints killed during the Tribulation? Several times in Scripture God promises to protect His people during that period (e.g. Revelation 12:6). Why didn’t these saints receive God’s protection?

Other scriptures reveal the answer. The last era of God’s Church before Christ returns is described in Revelation 3:14-22. Christ chastens it for being lukewarm and spiritually wretched. The large majority of God’s people today have fallen into that condition. That is a shameful truth. These people who have known God but turned away are not going to be protected by Him! God will allow them to experience the nightmares of the Tribulation because they were lukewarm and not excited about the Second Coming of Jesus Christ to stop all these crises forever! God says that this is what it will take for them to turn back to Him so that He can get them into the Kingdom of God, into His Family. 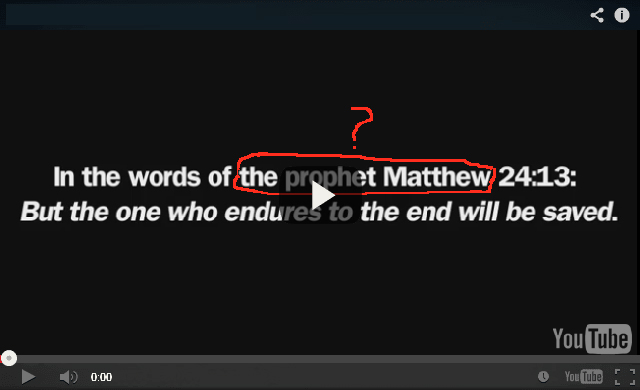 Those lukewarm saints are going to be killed during the Great Tribulation. But those who have known God and clung to Him—the very elect—will be protected.

“And then shall many be offended, and shall betray one another, and shall hate one another. And many false prophets shall rise, and SHALL DECEIVE MANY” (verses 10-11). The Greek word translated many means that MOST of God’s own people will be deceived! That is what Christ prophesied—and that is exactly what has happened in this end time. Ninety-five percent of God’s Church has been deceived. That proves we have to work very hard not to be deceived. We can be deceived so easily.

The Sixth and Seventh Seals

The sixth seal reveals mighty heavenly signs: “And I beheld when he had opened the sixth seal, and, lo, there was a great earthquake; and the sun became black as sackcloth of hair, and the moon became as blood; And the stars of heaven fell unto the earth, even as a fig tree casteth her untimely figs, when she is shaken of a mighty wind” (Revelation 6:12-13). These signs are an indication of the fearsome things about to come next.

Christ explains this sixth seal in Matthew 24:29: “Immediately after the tribulation of those days [which was the fifth seal] shall the sun be darkened, and the moon shall not give her light, and the stars shall fall from heaven, and the powers of the heavens shall be shaken.” Those are the same heavenly signs. You can also read them prophesied in Joel 2:31: “The sun shall be turned into darkness, and the moon into blood, before the great and the terrible day of the Lord come.” This confirms that these signs mark the end of the Tribulation—the 2½ years of Satan’s wrath—and signal the beginning of the Day of the Lord—the year of God’s wrath.

These are world-shaking events. And just as Jesus’s other prophecies have come to pass, so too will these!

Revelation 6:17 introduces the seventh seal: “For the great day of his wrath is come; and who shall be able to stand?” That seventh seal is spoken of in Revelation 8 and 9. It consists of those seven trumpets.

Here is where Christ explained the seventh seal: “And he shall send his angels with a great sound of a trumpet, and they shall gather together his elect from the four winds, from one end of heaven to the other” (Matthew 24:31). That seventh seal includes seven trumpet plagues that God pours out on mankind.

There are only a handful of scriptures about the Great Tribulation in Matthew 24 and Revelation, but there are over 30 about the Day of the Lord, which is the day of God’s wrath on this Earth. Joel says the Day of the Lord is at hand, as destruction from the Almighty. God is sick of mankind’s sin and lawlessness, which plunges us into the greatest crisis ever. The world has never seen anything like the wrath of God that it is about to see!

Yet sadly, throughout these plagues, mankind will refuse to repent.

How does all this end? At the last trumpet, Jesus Christ Himself is going to return to this Earth! “The kingdoms of this world are become the kingdoms of our Lord …” (Revelation 11:15). Jesus Christ is about to take over this world in crisis, rule it with a rod of iron and bring peace, joy, happiness and success to everybody on Earth. That is the kind of prosperity mankind really wants, but has never been able to achieve.