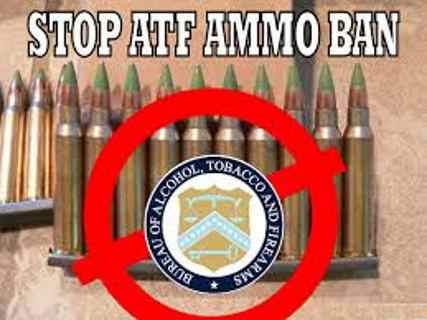 ATF Backs Down on Ammo Ban – For Now

Barack Obama’s ATF has, for the moment, backed off on their proposed ban of AR15 “armor piercing” ammo.

Under intense pressure from majorities in the House and Senate, the National Rifle Association’s huge membership, the Obama administration has abruptly changed course and is rescinding its push to ban popular and cheap ammo used by AR-15 owners.

The Bureau of Alcohol, Tobacco, Firearms and Explosives said 80,000 comments rolled in, many against the proposal to ban the 5.56 M855 “green tip” ammo. The NRA and the other groups still plan to flood ATF mailboxes with opposition letters just to make sure they go through with their withdrawal.

The statement issued by Josh Disingenuous, President Obama’s Liar in Chief, was simply outrageous. This president and this administration think they can lie will and nobody will notice.

“…we are looking at additional ways to protect our brave men and women in law enforcement and believe that this process is valuable for that reason alone. This seems to be an area where everyone should agree that if there are armor-piercing bullets available that can fit into easily concealed weapons, that it puts our law enforcement at considerably more risk.”

So the reason the administration wants to ban “green-tip” bullets is to protect law enforcement officers. It sounds like there’s been a rash of shootings of cops with these bullets. The president wants to paint a picture of a young cop, walking and beat, protecting a neighborhood, gunned down by a locally grown terrorist firing and AR15 through the officer’s bulletproof vest. The only thing that’s missing is the president on a floating surrounded by the widows and children of cops murdered this way.

So why no press conference with widows and children? Thank you for asking.

“Millions upon millions of M855 rounds have been sold and used in the U.S., yet the ATF has not even alleged, much less offered evidence, that even one such round has been fired from a handgun at a police officer,” they wrote.

A cop in the US has NEVER been killed with one of these bullets. As a matter of fact police chiefs, and police fraternal organizations don’t believe the president any more than we do.

“Not in my jurisdiction,” said Sheriff David Clarke Jr. of Milwaukee County, Wisconsin. “We’re doing a search nationwide to see if there’s any data that exists as proof of this comment coming out of the White House, but so far we haven’t found anything.”

Clarke said he was skeptical that the White House was really concerned about officer safety.

“I’m disgusted that this administration would use the safety and well-being of our nation’s law enforcement officers to accomplish their gun-control agenda by circumventing the Congress and circumventing the Constitution in rewriting this law,” he said. “That’s all this is. They don’t fool me. No fraternal order of police, no sheriff is going to fall for this.”

If the president was really concerned about protecting our police officers he do something about young black males. THEY are the problem. Young black men have killed more police officers in any given year than all forms of rifles have ever killed.

The President doesn’t care about cops anymore than he cares about your 2nd Amendment rights. And don’t think for a second Obama’s ATF isn’t going to come back and try to do this again.