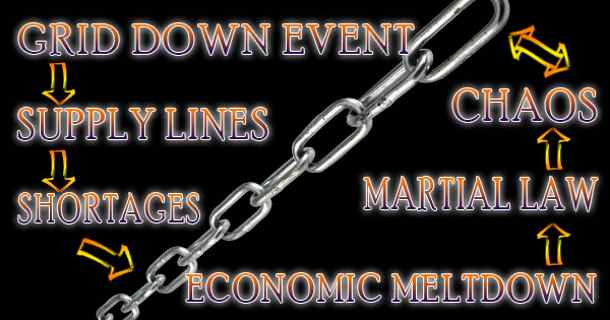 Prepare For a Grid Down Event. How Vulnerable is the US Power Grid?

Being a prepper means trying to become more prepared for every possible situation that we can. While for most of us being completely prepared is physically or financially impossible there are some things we should all be doing. So in this article I ask how vulnerable is the US power grid? Because a grid down event could be the primary disaster, or the secondary event caused by any number of disasters.

Imagine how you would react if all the modern conveniences you depend on day in and day out were all taken away. I’m not just talking about your cell phone and the lights in the house not working, I’m talking about everything we need to survive and don’t give a second thought.

Everything from how fuel gets in our cars to how the water drips from our faucet requires electricity. You might not have an electric toilet (I don’t) but that water has to get from the water possessing or treatment plant to your toilet tank somehow.

Not being able to get fuel from the underground tanks at the gas station will not only affect your ability to function normally, it will also affect the food supply line, and depending on how long the grid is down it could affect refinery’s, ranching, farming, public services and even the ability for hospitals to function properly.

Now think about how others will react. You might be semi prepared, but what about the people who are absolutely clueless to how fragile our power grid really is? How will these people react when the hand that feeds can no longer do so, and they are left to fend for themselves?

The truth is, these people will be after what you have. This is the scenario we all worry about when we think about the golden hoard flooding Wal-Mart and fighting for the last loaf of bread.

We all know that the average grocery store has about 3 days of food at any given time, but that 3 day supply can become a 3 hour supply in a grid down event, leaving people to fend for themselves.

These people that eat at McDonalds on a daily basis, and have no more than a few days of food in their homes will quickly become desperate. When our full service society comes to a screeching halt these people will first ask for a handout, and when that doesn’t happen they will be forced to take what they need at any cost.

How Vulnerable is the Power Grid?

The short answer is alarmingly vulnerable! In the last 125 years our power grid has been pieced together starting from the east coast and slowly stretching to the west. In a recent podcast we had Jim Cobb on and he used the analogy of adding on to a home.

Each time you add onto that home you use different building materials, different paint and have to hack the plumbing and electrical together to get power to the whole house. This all might work for the time being, but over time this hodgepodge of duct tape and bailing wire will begin to fall apart causing major issues if it is not fixed.

Here are some startling facts about how vulnerable our power grid really is. If we continue to be reactive with the power grid, as opposed to proactive about hardening the grid, we are just prolonging an inevitable grid down event.

The grid is made up of private entities (utility companies) and because the cost of these transformers are so cost prohibitive they don’t purchase backups. Each individual company has different product specs, so one size does not fit all. On top of that, these transformers are manufactured overseas and can take up to a year to make.

An enemy can achieve an HEMP attack without a high level of sophistication. An article from the Center for Security Policy states the following:

“According to a blue-ribbon commission empaneled by Congress in the last decade to evaluate this EMP threat, the effect of such an attack – perhaps delivered by a relatively short-range ballistic missile launched from a ship off a U.S. coast – would be “catastrophic.”  That is because, at present, our grid has not been “hardened” to withstand such electromagnetic pulses.

As a result, the EMP Threat Commission found that our bulk power system and particularly its key components – notably, roughly 1,000 large and smaller transformers that are its backbone – would be damaged or destroyed.  This would cause power outages that would be widespread, protracted and result in the rapid and enduring collapse of all other critical infrastructures (food, water, medical, telecommunications, transportation, finance, etc.)”

It’s important to note the last sentence of that paragraph, a large scale grid down event will affect everything, sewage systems, automobiles, electronics, supply lines and communication etc.

Cyber-attacks seem to be happening more often than ever these days, yet we still have been lucky enough that these hackers have not gone after the power grid.

Maybe this is because they would be out of a job without the internet, or maybe it’s because the wrong person (or country) just hasn’t tried yet.

North Korea is one of the countries that concerns me the most. North Korea now has an intercontinental ballistic missile (ICBM) capable of delivering a nuclear weapon to the United States, as demonstrated by their successful launch and orbiting of a satellite on Dec. 12 of 2012 according to the Washington Times.

The question is not IF this will happen…

…but WHEN this will happen.

This means that if something isn’t done about the power grid very soon our lives or our children’s lives could look very different. When it comes to prepping we are constantly looking at “what if” scenarios, so an inevitable disaster is a huge concern for me.

What would the US look like without a grid?

“What would the US look like without a grid?”

“William Forstchen’s novel, One Second After, gives a chilling portrayal of what life may look like after an EMP detonation. It describes a population totally unsuited for living in the dark.

Deaths come in waves; first the elderly and then those who depend on medication. Following that are those who die of simple diseases, like typhoid or dysentery, as well as those who have no survival or farming skills, though even subsistence farming would likely be a challenge given the speed in which society would collapse versus the time it takes to actually prepare fields and grow substantial amounts of food.

Eventually, the few survivors in the small town who have overcome these deprivations and learned to produce food face continual security issues, having to fight off marauding bands and, interestingly, bullets become a base currency in their economy. It’s pretty bad stuff.”

The fact that 9 out of 10 people have no idea how eminent this is tells me that if and when something like this happens, it is going to be very bad. 9 out of 10 people means that even though you and I might feel as though we are prepared, that guarantees nothing, making protecting what we have just a valuable as the supplies themselves.

How to Prepare For a Grid Down Event

The five areas of preparedness are a great place to start when it comes to an off the grid event, with an emphasis on security. With so many people getting caught off guard, and with the potential of getting set back 200 years, protecting what we have will be critical.

Survival and being prepared should not only be a passion, it should be a lifestyle. The definition of a prepper is “An individual or group that prepares or makes preparations in advance of, or prior to, any change in normal circumstances, without substantial resources from outside sources” Like the Government, police etc.
I don’t believe that the end of the world will be the “end of the world” I believe it will be the end of the world as we know it now.
You can also find me on Google Plus and Twitter

1 thought on “Prepare For a Grid Down Event. How Vulnerable is the US Power Grid?”