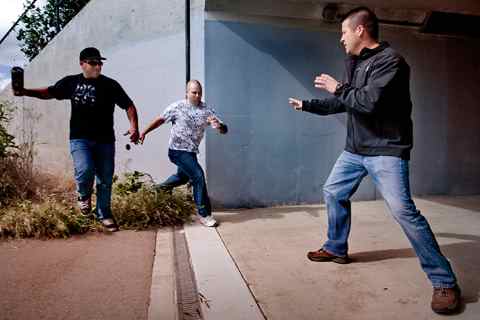 Profiling and Personal Defense: How to Assess Dangerous Situations

The lawful carry of a concealed handgun is an important component of personal defense, but the mere possession of a gun is no guarantee of safety. Obviously, you must be proficient in the use of your chosen handgun to include safe handling, proper manipulation, efficient drawing from concealment and the ability to hit what you are aiming at. But there’s more to concealed carry than mastery of these physical skills. If you’re unable to detect a potential threat in time to respond, all the firearms proficiency in the world isn’t going to help you.

Rather than being lulled into a false sense of security because you’re armed, you should strive to be constantly aware of your surroundings for signs of potential danger. The faster you detect these red flags, the more time you’ll have to process the information and make a decision that is both tactically sound and legally defensible. Assessing a dangerous situation requires alertness.

An excellent model for understanding alertness as it pertains to personal defense was developed by the late Col. Jeff Cooper, who assigned colors to different levels of alertness. “Cooper’s colors,” as they’ve come to be known, have been widely used in military, law enforcement and personal defense training for decades. Cooper’s simple concept is based on four colors.

Condition white is used to describe someone who is completely unaware of his or her surroundings and oblivious to potential danger. Ideally, condition white should only be attained while you’re asleep, but many people unfortunately live their lives in condition white. You’ve seen these people jogging alone at night wearing headphones, walking to their vehicles in a deserted parking lot while texting, or sitting on a bus bench intently reading the newspaper.

Those who fall into the condition white category can be described as “blissfully ignorant.” When confronted with danger, their response will be significantly delayed because they think it could never happen to them.

Imagine a driver in condition white approaching a crosswalk while texting on his cell phone. A pedestrian in condition yellow starts to step off the curb into the crosswalk, but notices the vehicle is not going to stop. Condition yellow saves lives because it takes into account bad things can happen and it gives you the opportunity to spot potential danger in time to respond accordingly.

An example of condition orange: While walking to your vehicle, you glance over your shoulder and notice a man approach you at a faster than normal pace with one hand near the rear of his waistband.

The man’s approach is cause enough for concern. When you add to that the fact that his hand is near the rear of his waist—widely considered the most common location to carry a concealed weapon—the little hairs on the back of your neck should be on end.

Since you’ve perceived the potential threat, you can take appropriate action, which would likley involve moving to a position of cover while drawing your gun from concealment, and ordering the man to stay back.  The man’s response to your actions will dictate whether you can bring the situation under control, or kick things up a notch to condition red.

Condition red is the highest level of alertness on Cooper’s color scale.  It signifies a specific threat has been confirmed and you are prepared to respond.  Condition red does not necessarily mean you are pressing the trigger to the rear but it certainly means that you’re prepared to, based on the actions of your adversary.

In the situation described above, if you were to observe a black object in the man’s hand, you will have transitioned from condition orange to condition red. If you then determine the object is a cell phone, additional verbal commands and the utilization of available cover may be in order. On the other hand, if the man produced a gun and pointed it in your direction, shooting the man in order to stop the threat would be warranted.

Don’t bet your life on marksmanship alone. Give yourself an edge by remaining alert to potential threats. If you’re armed, you don’t have the luxury of operating in condition white.