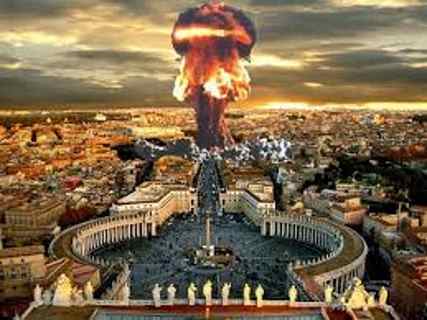 Russia is going to punish The World! — THE THIRD SECRET OF FATIMA IS REVEALED

Besides the Message of Fatima given by Our Lady to the general public in the series of apparitions from May 13th to October 13th, She confided on July 13th, 1917, a Secret which was to be given later to all the faithful by Sister Lucy and the Church authorities.

This Secret is divided into three distinct parts and Sister Lucy with the approval of her bishop revealed the first two parts in 1941. The third part was written down between January 2nd and January 9th, 1944, under holy obedience to her bishop and after Our Lady of Fatima appeared to Sister Lucy confirming that indeed God wanted the third part of the Secret to be now written. (This third part of the Secret is commonly referred to as the Third Secret). The Pope and the Bishop of Leiria could read it immediately.

Our Lady asked that this third part of the Secret be made known to the faithful at the latest by 1960. Like the first two parts of the Secret, it is clear, and easy to understand. Like the second part of the Secret it is prophetic. We are now living through the Third Secret. You may be one who needs to know its contents in order to save your soul and your loved ones from eternal ruin.

The Third Secret has been unveiled by Frère Michel, who is most qualified to write this study after 4 years of research. His conclusion is the same as Father Alonso, the official archivist of Fatima for 16 years. You will know when you finish reading this study that you indeed know the substance of the Third Secret.

This is a profound, easy to read, and yet deeply moving study. Because it penetrates with a high degree of certitude the Secret which the Vatican has sought for 34 years to bury, this article is bound to have great impact on the Church, the salvation of millions of souls and ultimately on world history.

The message of Fatima is a heavenly light and occasion of grace and salvation for the 20th century, a Message and an event unparalleled in Church History, the most momentous and important event of our time, which is still unfolding to this day. So, too, this study is momentous and important since it finally tells you the shocking, yet salutary Secret which once it is widely known will deliver the Church and the world from the powers of Antichrist.

At present, these satanic powers seek to drag millions of souls to eternal ruin and the whole world to enslavement to Antichrist while various nations will be “annihilated”, “wiped off the face of the earth”.

Read these words, meditate on them and share them with others on. It is most important and most urgent that the contents of this study be widely known because it reveals the Third Secret of Fatima.

This knowledge will finally unleash the power that will deliver mankind and the Pope from the chains satan has bound us in. This Secret is the key to avoiding that which Pope John Paul II at Fatima called “the almost Apocalyptic menaces looming over the nations and mankind as a whole.”

WITH WHATS GOING ON IN RUSSIA AND UKRAINE, IT MIGHT BE WISE TO LOOK BACK AT SR. LUCIA’S WARNINGS!THE HIDDEN THIRD SECRET IS FINALLY REVEALED

The Third Secret of Fatima

OUR LADY GAVE MESSAGE OF WARNING IN FATIMA:
She told children that God had chosen to use Russia as the instrument of chastisement to punish the world if people do not change, if people repent they will obtain conversion of Russia to the Catholic faith.