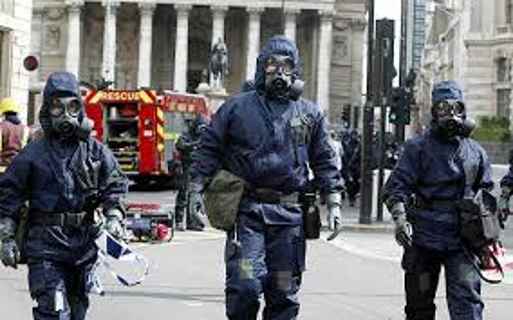 Most Americans are too submerged in their personal technology, or in the vast amount of entertainment that is available to pay attention to the important things, such as preparing for a terrorist attack and keeping you and your family safe. Perhaps they are counting on the government to save them in case something like this happens again, or maybe they have already forgotten, and are back in the normalcy bias that something like that could never happen again.
However, many people are beginning to wake up, as they finally begin to understand all is not right in our own country. A terrorist attack on the United States is not a matter of if it will happen, but when it will happen.

RELATED : Keeping Your Family Safe During a Terrorist Attack

But what can you do? What can you do right now to protect yourself and your family in the event something awful happened here again? The answers aren’t easy, and you won’t have them handed to you. Unfortunately the type of people who choose to do horrific crimes against others don’t come with instruction manuals, But hopefully, this will give you a general idea of things you can do to protect yourself, family and loved ones in case of a terrorist attack.(source)
Some Basic Steps to Prepare for a Terror Attack

Stay vigilant.
Remember that violence can happen anytime, anywhere. At your local mall, open marketplace, train station, school functions, or your office building.
Look for things and people that are out of place
For example, a suit case or brief case sitting in the middle of the food court at a shopping mall should set off alarm bells. While we are not ones to judge a person’s character by the color of their skin or ethnicity, the fact is, that modern day extremism targeting the West, in the majority of cases, originates from Arab-born individuals. It is human nature to make initial judgments based on external features, so “profiling” is something that you probably already engage in on a regular basis. If you have flown in the last eight years, and you noticed a group of what seemed to be Muslim men, chances are you already prejudged what they may or may not be. Don’t feel bad about profiling, because the fact is, all humans do it. Profiling, combined with other observations, such as looking for typical features of someone under stress like sweating, shifting eyes, and anxious behaviors could act as a potential indicator for a developing threat.

RELATED : Are You Prepared In Case of a Terrorist Attack?
Look for exits.
While there is no need to panic when going into public places, as the probabilities are still low that you would be in a target area, identifying emergency exists routes as you enter an area is one of the first things to consider. Look for secondary and emergency exits. In an emergency, chances are that the majority of those in your immediate vicinity will default to their entry point as an exist. This means that a good 90% of people will be rushing the same exit. When seconds count, and a mass of people starts to panic, you would be better served taking an alternative exit.
Prepare an evacuation route.
Similar to the point above, in the event of a city-wide or regional terrorist attack or other emergency, most people will evacuate via major highway arteries. Knowing these arteries and then avoiding them may save you precious minutes or hours as you evacuate an area that may have been hit by a chemical, biological or nuclear (tactical, suitcase, dirty) weapon.
Plan your evacuation routes now. It only takes a few minutes via online mapping technology. Either print your evacuation maps, or obtain traditional maps of your local area, region and state. One of our contributors recommended obtaining a topographical map, which unlike traditional maps, also includes back roads, small country roads and rivers.

RELATED : 75 BUG OUT BAG LIST ESSENTIALS FOR SURVIVAL AND PREPAREDNESS

Prepare a Bug Out Bag
Pack a 72 hour bag(s) that includes, but is not limited to, supplies like emergency food (MRE, Freeze Dried Pouches, Emergency Dietary Bars), Water filter/Purification Tablets, money, basic medical supplies, clothing, multi-tool, backup maps, address book/contact lists, tent and sleeping bags. A 72 hour emergency evacuation pack is the bare minimum. Be sure to consider all family members and dietary requirements when packing your bag(s). A 5000 cubic inch bag, generally used for trekking, could provide a 10 – 14 day buffer for a single individual if it is packed correctly. (More 72 Hour Kit Ideas)
Water
Have at least 10 gallons of water (two of those large 5 gallon jugs) on hand at all times. In the event of an emergency, your water supply may be inoperable or contaminated, so having some on hand to throw into your bug-out vehicle could be a life saver.

RELATED : Give You, Your Family and Your Assets the Protection they need with the Best Home and Personal Self Defense

Self Defense
When millions of people hit the streets in an evacuation, there will undoubtadly be those who were not prepared and will take whatever measures they deem necessary to acquire food, water and a ride out of town. Be prepared to take defensive measures in the event you and your family come under threat. Remember, though, that your main goal is to evacuate, not to be involved in altercations, so use force to defend yourself only as a last resort.
When your gas tank is half-full, it’s empty
To ensure you never run out of gas, make it a habit to fill up anytime your gas gauge gets below 50%. Most vehicles will be able to get you at least 125 miles of continuous driving on a half tank of gas. If possible, having a reserve gas container (5 – 10 gallons) would also be a good idea.
Know where you’re going
If you have to evacuate, you should establish multiple bug-out locations outside your general area of residence. Contact family and friends and work out emergency shelter in the event of a catastrophe. If you do not have friends or family outside of your city, then consider adding hotels, motels or camp grounds, with phone numbers, addresses and directions to your evacuation planning.

RELATED : Terrorist Attack: Biological, Chemical, or Nuclear Attacks
Go with your gut
The fight or flight response of humans has been honed over the last 200,000 years. Some call it intuition. Let it work in your favor. In emergencies, you will have a heightened sense of awareness, and coupled with your preparedness planning, your intuition may play an important roll. Listen and act accordingly.
Plan on Plan A not working
Also plan on Plan B not working. It is impossible to predict when and how disaster will strike. Having a plan not only gets you prepared and provides you with a check list to execute in the event of an emergency, but also prepares your mind for the unexpected. While you may not know exactly what you’re not expecting, the fact that you know there are unknowns going into it makes you that much more prepared.
Surviving an emergency, in many instances, will not come down to how good of a plan you put together. It will come down to how prepared your mind is to handle dynamic, fluid situations under stress. Stay optimistic and believe in your ability to continue moving forward no matter what difficulties come your way.(source)

Preparing for a Terrorist Attack

RELATED : The US Government Is Prepping For Unlikely Events Like War, Catastrophic Collapse of Society, and Even Asteroids – Are You?

Robert Kiyosaki — It is NOW Time to Leave the Cities! Prepare Yourself For What’s Probably Coming