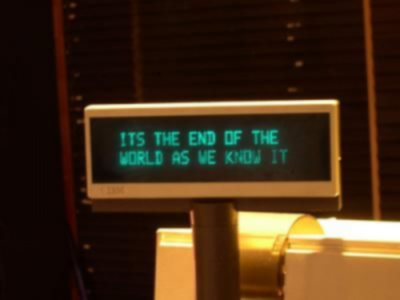 What if today was the last ‘normal’ day any of us ever have?

What if  in ten minutes time life as we know it ceases to exist?

How it could start for millions of people

Maybe you wouldn’t notice right away, the alarm goes off, you get up and head for the bathroom, you shower, you dress and then you go downstairs, maybe put on the kettle or the coffee pot. A short time goes by, and you realize the kettle hasn’t boiled. You try the light…the powers out.

You look out of the window to see if anyone else has lights on, they don’t. Living on a hill you can see some distance across town. It’s winter, sometimes a line comes down, especially up here in the hills, looking out of the window usually gives you an idea of how widespread the outage is. Today is no different. The difference today is that there are no lights, none. Clayville, population 15,879, and less than a mile away from the window you are looking out of, is in darkness.

This is unusual. In the 14 years you’ve lived in the house you have never seen an outage this widespread. there have been plenty of outages, but its usually a pole has come down and snapped a few wires, or lightening has hit one of the substations and a few streets, or even a couple of blocks are off.

You pick up the phone to call the power company…it’s dead.

You go through the contacts list in your cell phone and call a colleague who lives four miles away, in the suburbs on the other side of town, you can’t see his district from the window. Your cell beeps repeatedly, there’s no service.

A strange feeling sweeps over you, you’re not sure what it is, but you don’t like it. There’s no point musing on what’s going on, you need to get to work. You go back upstairs and wake your wife, telling her what’s happened. she reminds you that the garage door is electric, they all are on your exclusive gated estate on the hill.

I could carry on, but I think you get the picture.

This is fiction, one of many scenarios that could take place, but it’s plausible, and for many this will be their first taste of the end of the world as we know it. A cascading power failure can happen fast, frighteningly fast, and if it happens at night there will be whole time zones who will have no idea what has happened.

What they won’t realize is that what has happened is incidental, the reason for the outage is at this stage unimportant. Dealing with the situation they are in should be their prime directive.

While they ruminate on the reasons behind the outage…and wait patiently for normal service to be restored, any prepper worth a damn will be using the time to get even further ahead than they already are.

What you do during that golden hour or two before the masses realize what’s happening will depend on your set up and environment. Many people say they would head off to the nearest 24 hour superstore for a final shopping trip. Personally I wouldn’t do that. I live on an island. Due to the weather conditions and high winds here we have no poles or pylons to carry our electricity, it’s all underground to protect it from the elements. It’s often the case that we still have power when local parts of the mainland don’t so if we’re off, more than likely they are also.

Heading to a superstore means leaving the island and negotiating major roads that may not have working traffic signals etc. I have to consider the possibility of not getting back onto the island if there is any form of incident or accident. There is no way around a hold up when there is only one single carriageway road that leads on and off the island. If I can’t get back to the bridge, I can’t get home. Not a risk I am willing to take.

My first step would be to fill the bath, water butts ( I keep four new empty ones in the garage) and every container I had with tap water. Then I would hit the local shops. Being known to the staff there is more of a chance that they would accept my cash in return for goods than a faceless superstore would. Having been to the shops I would go to the island log supplier, not the cheapest, nothing is on an island but they sell good, well seasoned hardwood. transactions are strictly cash and it’s quite normal to collect it yourself to avoid a delivery charge. I’d pick up a decent amount and arrange to have a load delivered also, it usually is on your drive less than an hour after you’ve paid for it.

In a couple of hours I have topped up my water supply, collected a bit more food and purchased a couple of tons of wood…there are some advantages to living in a small place where most essentials are to hand.

Water, food and heat, the essentials of life. Having these essentials allows me to think calmly about the future and to implement the plans I have put in place to ensure that we survive whatever life throws at us.

It’s a sobering thought that one day we will get up and whatever we own that day is all that we will ever own unless we produce it ourselves. No more clothes or furniture, no more cans of beans or bandages, no more of anything that isn’t home produced or traded.

Money will mean nothing, barter will be king.

Skills and services you can offer will be worth more than gold.