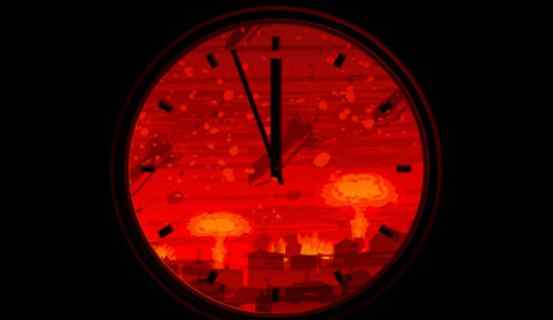 Could World War 3 fears related to 2015 predictions for nuclear war make the Doomsday Clock tick closer to the end of the world? It’s possible that this Friday, the world will be four minutes to midnight, although there’s multiple competing theories for why the Doomsday Clock may change this year.

In a related report by the Inquisitr, the symbolic Doomsday Clock was created in 1947 to illustrate how close the world is edging to a global catastrophe. Reasons for adjusting the clock have changed over the years, but nuclear war has always been the largest fear. Although the Doomsday Clock was set at five minutes to midnight for both 2013 and 2014, the Bulletin of the Atomic Scientists (BAS) claimed in 2015 that they have a “major announcement,” which makes 2015 unusual already.

Predictions for 2015 already include multiple reasons the Doomsday Clock could point to the end of the world. Artificial virus technology created for medical purposes could be used to create a viral bio-weapon that rivals the horrors of fiction. The only bright spot in the news is that NASA considers a 2015 asteroid impact on Earth to be of concern, but still not likely.

Unfortunately, in the long run, financial experts really do believe World War 3 is inevitable due to economic reasons, and it’s possible Vladimir Putin’s claim over Arctic oil could be a trigger point, since it’s believed worldwide oil reserves could run out by 2060. Although one would hope World War 3 does not automatically entail nuclear war, Russian nuclear weapons now surpass the number of U.S. warheads, and recently, a former Russian general warned of Russia’s nuclear plans for the world. Former Soviet leader Mikhail Gorbachev even warned of a Russian nuclear war over Ukraine even as Japan is under siege by Russian and Chinese jets at levels not seen even during the first Cold War. It’s also claimed that Russian submarines may be spying on Sweden and England, although Russia officially denies these reports.

These type of fears also spilled over into social media in recent days, with hackers taking over the Twitter account of the New York Post and United Press International. People were justifiably scared for a bit, when tweets claimed that Pope Francis announced the beginning of World War 3. One tweet even claimed that U.S. Navy was engaged in active combat against the Chinese Navy in the South China sea. A nuclear-powered aircraft carrier, the USS George Washington, was even declared as damaged.

Are these fears related to World War 3 enough to move the Doomsday Clock a minute higher? The last time the clock read four minutes to midnight, former President Jimmy Carter pulled the United States from the Olympic games in Moscow after the Soviet Union invaded Afghanistan. The good news is that the Ukraine peace talks in Minsk are still proceeding, so it’s possible the BAS may have something else in mind besides World War 3.

Instead of nuclear war, the 2015 predictions made by the Doomsday Clock may choose to focus on the politics of climate change. The November 2014 Intergovernmental Panel on Climate Change (IPCC) report claimed accelerating global warming in addition to citing a lack of major international intervention. In addition, the U.S. Senate recently passed legislation in support of climate change science, and there was also the United Nations Framework Convention on Climate Change held in Lima, Peru.

Do you think recent world events merit the Doomsday Clock changing to four minutes to midnight? What is the worst threat: climate change or talk of World War 3?

2 thoughts on “2015 Predictions: World War 3 Fears Tick The Doomsday Clock Closer To The End Of The World”