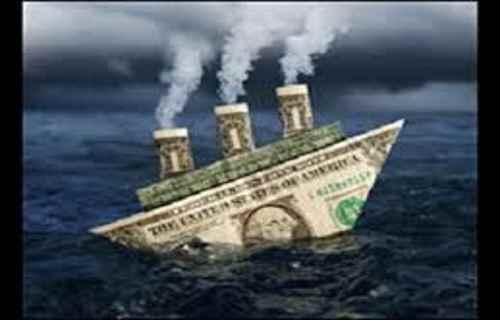 What is dollar collapse?
The dollar collapse is no longer a secret.Almost everyone seems to know of this. The collapse of any given currency generally implies the absolute devaluation of a given currency in relation to others in the world. The collapse of the dollar, however, means this and much, much more. This is owed to the fact of the US Dollar’s unofficial status as world currency, alongside the Euro since the Bretton Woods agreement.

RELATED : 20 LOST RECIPES FROM THE PIONEERS: WHAT THEY COOKED IN THEIR JOURNEY WESTWARD
Numerous nations around the world have since pegged their currencies to the dollar as it has provided them with a hard currency they could base their reserves on. Most even use it to settle trade transactions internationally. This means that a greater percentage of the world’s commodities are priced and traded in US dollars, and thus, dollars must come in play at some point.

The US dollar declined 40% between 2008 and 2009 and 40% more between then and 2011.In 2011, both China and Russia were considering switching their considerable dollar reserves to Euros. Such statistics and news is what led economic experts, David Hodges and Max Keiser to believe there is an
imminent dollar collapse in the near future as stated in their articles ‘what will happen when the dollar
collapses ‘and ‘Dollar Collapse’ respectively.
In the event of a dollar collapse, all these nations would scramble to trade in their entire dollar reserves in favor of other currencies, say, the Euro. The price of a dollar would fall so far in the raging frenzy to be rid of it that it becomes, basicly, valueless. This could be brought about by panic over the value of the US
dollar rapidly and steadily falling over a very short time period thus its previously trusted stability is in doubt.

What would it mean?
The collapse of the US dollar could mean the plunging of the world into a repeat of the 1930s
Great Depression. Nations will not be able to trade sufficiently causing them difficulty in
servicing their debts and hence forcing them into bankruptcy. Countries whose entire economies
depend on the dollar like Australia, New Zealand and Canada will also be forced to collapse.
Asian economies that have, for years depended on the US dollar in trade will be severely
affected although they will be able to bounce back after a while, but not before suffering great
loss.
The health sector will suffer an immense blow as people will not be able to afford proper health
services in addition to the countries’ inability to provide them’. The number of people living in
poverty will increase worldwide, most especially in the US, which goes without saying. This
would then result in an increase in crime rates as people struggle to survive in the ensuing
economic crisis. The US will be knocked way down to a third world country and lose its status as
a superpower
Global currency reserves will then be entirely converted to an alternative, more stable currency
like the Euro, which comprises less than 30% of the reserves.

– Stock Up On Survival Food Today! –

Hope for the best, but prepare for the worst.
This is a good motto to live by, despite how you think about things. Individuals can still hope for the best (that things can and will eventually work out), but what good is your prosperity going to do if you don’t have anything to eat or a safe place to hang out for an extended period of time?
Why not prepare while you still can — when things are readily available and can still be purchased at cheap prices? The coming hyper-inflation will make any such purchases beforehand look very intelligent…
To prepare for the worst, you need a plan. Why are most people so against doing basic preparations that could be the difference on how they survive — or whether they survive?
History shows time and again that those who prepare always fare better than those who did not.
Having a plan and being determined to act on that plan will always be the best way to handle any contingencies, should they occur.
After disaster strikes, your mind is going to be racing around like a car on a race track. Preplanning
and having a written set of measures to take will make someone’s life go much smoother when the SHTF.
Your own personal plan is ONLY what best fits what you are going to do during and after a
disaster.
People should also have back-up plans — Plans B and C, at least — because nothing ever seems
to go as planned. Haphazard approaches to the aftermaths of catastrophes are kind of like a chicken running around without its head.

RELATED : How Young Americans Survived the Hard Times of the Great Depression

Prepare 72-hour “bug-out” bags.
This is an easy, cost-effective preparation that makes a ton of sense — no matter what happens.
Even a small preparation like this can have an enormous impact on how you survive the first few
days after any type of catastrophic event.
I’ll bet there were a lot of people after Hurricane Katrina that would have loved to have such a
bag for each member of their family…
This could be a backpack or bag of some sort for each family member that contains all the items
that individual may need during the first 72 hours after a disaster strikes.
Items to include in such a bag would be toiletries, important papers (see below), change of
underwear and clothes, some bottled water, snacks, a few bags of freeze-dried food that only
require two cups of hot water to reconstitute within self-contained bag, water purification device,
metal cup and small pot for boiling water, backpacker mini-cook stove with fuel, sleeping bag,
towel, ability to make fire, flashlight with extra batteries, glow sticks, ground cloth, tarp, rain
gear, plastic forks, knives, spoons, parachute cord, personal cleaning wipes, a first aid kit and
medication, good sharp knife and a multi-tool, fishing line, small fishing hooks, compass, cash,
physical gold and silver, map of areas you may need, and any other items that would make sense
for you.
Special items required by the elderly, babies, and pets need to be considered as well.
Important paperwork you should bring with you includes: birth certificates, insurance policies,
passports, medical records, pet medical records, bank account information, deeds and titles to
cars, homes etc., and computer backup.
Gather these and put them in a suitable container and wrap in plastic against the elements.
Having such preparations after a tornado, hurricane, or any calamity would allow you to grab
and go because it’s already prepared.
Each member of my family has such a bag. I keep each one of them in the basement of our house
in a heavy-duty large trash bag for protection against the elements.
Understand what “just in time inventory” is — and how this can affect you.
Most Americans take for granted the intricate systems that make it possible for us to engage in
seemingly mundane day-to-day tasks like filling up our gas tanks, loading up our shopping carts
at the local grocery store, obtaining necessary medications …
When we wake up each morning, we just expect that all of these things will work today the same
way they worked yesterday.
What very few people have considered is the complexity involved in the underlying
infrastructure that allows goods, services, and commerce in America to flow. Fewer still have
ever spent the time to contemplate the fragility of these systems or the consequences on food,
water, health care, the financial system, and the economy if they are interrupted.
The truth is our “just in time” inventory and delivery systems leave us incredibly vulnerable to a
nationwide disaster.