In the 1964 movie Dr. Strangelove, the world stands on the verge of nuclear annihilation due to a “silly thing” one of the US base commanders did by ordering his planes, which are carrying nuclear weapons, to attack the USSR. The movie harkens back to the bad old days of “The Cold War” between the US and USSR, when the doctrine of Mutually Assured Destruction (MAD) ruled the minds of national security policymakers. The doctrine, with its implied theory of nuclear deterrence, led to a proliferation of intercontinental ballistic missile (ICBM) sites throughout the USA. After tensions eased between the US and USSR, the government decommissioned many of these silos, and had the missiles destroyed.

But some of the ICBM sites survived, and one of them is being sold. Today’s remarkable listing is for the interestingly titled 19 Acre ATLAS-F ICBM Missile Silo Base Underground Doomsday Fortress Bunker:

There is not a lot to see, because the majority of the silo (all 17 stories) is underground. Take a look at this sketch that shows an artist’s rendition of the silo and attached command center: 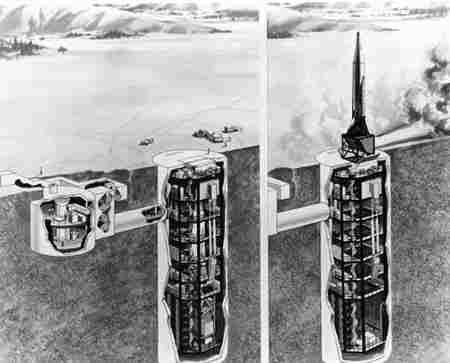 There is obviously a lot of potential here, but we do want to note, up front, that an ICBM missile is not included with the silo…

So, what can you do with an abandoned ICBM silo? The seller, 6740mike, has some suggestions:

“Property can be used for most any purpose without restriction except business (standard permit required for business use) and is ideal for an individual, family, or group seeking the ultimate secure facility to build out.. These sites are rare as there were only 72 of these sites built in the entire country and cost a staggering 15 million dollars to build in the 1960′s. Spectactular home site, topside or underground.”

The silo sits on 19 acres of land in… well, somewhere in central Kansas. The seller specifies that the “actual location will only be disclosed to serious qualified buyers.” And there was an “open house” of sorts, when the seller offered to show the property on May 4 and May 5. We are sad to have missed the event, but maybe potential buyers can arrange for a private tour.

The good news is that the seller provides a link to two videos showing what the silo looks like inside. This is our favorite:

As you can see, the place needs some work, and it looks like water is still being pumped out of the missile silo. In the video, the seller estimates there is still about 95 feet of water to pump.

But don’t let such a minor detail stop you. A quick YouTube search shows us a video of a fully restored ICBM silo, so you know the potential this piece of real estate has:

Very rarely do decommissioned ICBM silos come up for sale, so if you are interested, act fast. With a Buy It Now price of $475,000, it might just be the thing for a newly minted (and slightly paranoid) .

Underground Bunkers and Shelters: the facts you need to know