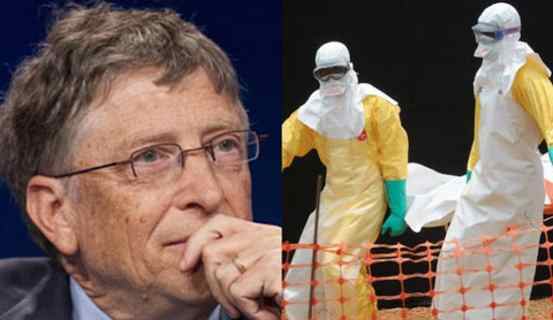 Microsoft founder Bill Gates has spent a lot of time in the field of vaccines and medicine, so much so that many consider him to be one of the world’s  foremost experts on vaccination and disease trends. He has spent millions of dollars of his own money investing in vaccine-related technologies and is a strong proponent of widespread vaccination programs.

Whatever your views on vaccinations, the fact is that Bill Gates is revered for his activities by the global community. Moreover, he has the money and connections to facilitate the implementation of widespread programs, whether voluntary or forced.

In his latest Op-Ed Gates sends a stark message to political leaders and the general public, claiming that a virus even deadlier than Ebola may be on the horizon. According to Gates, should such a virus start spreading the world is ill-prepared to handle it.

The Ebola epidemic in West Africa has killed more than 10,000 people. If anything good can come from this continuing tragedy, it is that Ebola can awaken the world to a sobering fact: We are simply not prepared to deal with a global epidemic.

Of all the things that could kill more than 10 million people around the world in the coming years, by far the most likely is an epidemic. But it almost certainly won’t be Ebola.

Other diseases — flu, for example — spread through the air, and people can be infectious before they feel sick, which means that one person can infect many strangers just by going to a public place. We’ve seen it happen before, with horrific results: In 1918, the Spanish flu killed more than 30 million people. Imagine what it could do in today’s highly mobile world.

Indeed, the reemergence of a deadly virus such as the Spanish Flu would be disastrous.

But should we be worried? According to Dave Hodges we should be.

Bill Gates lust for vaccines knows no bounds. At his and other “philanthropists” (i.e. psychopaths) encouraging, global researchers have begun to reconstitute old viruses, presumably for the purpose of developing vaccines for the deadly pandemics of the past.

In the near future, we may wish we would have followed the old axiom, “Let sleeping dogs lie”, because in an act of extreme insanity, the virus has been reconstituted, by the Center for Disease Control researchers. The reconstituted virus was obtained from frozen tissue samples from a female who died from the virus in the 1918 outbreak.

Unfortunately, the Spanish Flu is not the only pandemic which is being reconstituted and this means even more vaccines for Bill Gates. Howe many will die in order that Gates and his partners will realize a hefty return on investment?

The jury is not out on Bill Gates. He is a man who speaks his mind. In his New York Times editorial, Gates warns us about the return of Ebola as well the re-emergence of other deadly viruses. It would be a grave mistake to not take Bill Gates seriously. What does Bill Gates know that we do not?

We know that scientists are bringing back the plagues of old, justifying this by claiming they are using these old viruses to create new vaccines. Further, the military has been working on biological weapons for decades, so one can only imagine the kinds of viruses they have in their back pocket.

But one can’t help but think that maybe the public is being set up for future programs that will require forced vaccines.

In recent months we have seen the reemergence of measles in the United States. Though no one has officially pinpointed the cause, it is suspected that the government’s open border policy may be to blame. But the debate over measles centered not so much about how this supposedly extinct outbreak got here, but that everyone needs to be vaccinated.

We’ve heard similar arguments about a coming Ebola vaccine. Though not yet tested, we are already hearing calls for forced vaccinations should one be developed. Amusingly, there’s even talk of a combined Ebola/Measles vaccine.

The end-game is not yet clear, but given that the highly respected Bill Gates is warning of uncontrollable epidemics, there are a couple of scenarios that immediately come to mind. First, the Executive Branch of the United States has no qualms about using Executive Actions and Orders to implement policy, so forced vaccinations could well be on the way should the right crisis strike, and they’ll come complete withwidespread martial law declarations. Second, and perhaps even more frightening, is that Bill Gates has inside knowledge of a deadly disease that may soon be unleashed.

Since there would be no cure, your only option would then be to get vaccinated, or, toimplement measures to avoid contracting it to begin with.

The time to make preparations for a worst-case scenario is now. The following are six key warning signs you should be looking for. When these events come to pass or you see these signals, you should strongly consider implementing a self quarantine lockdown:

If any of these signs begin to appear around you, it’s time to seriously consider distancing yourself from society, and especially highly dense venues like retail stores, sporting events or schools.

Source: When Should I Go Into a Full Pandemic Lockdown Mode And Self Quarantine?

As we saw with the recent Ebola scare last year, Bill Gates has good reason to be warning that the world is unprepared. In October of 2014 a single Ebola patient overwhelmed the medical system in Dallas.

Consider for a moment what something like this might look like if  several cases popped up throughout a major metro area simultaneously. Would all of the hospitals to which those infected with Ebola were taken then shut their doors to new patients?

What this means for you is very simple and it’s something that members of the preparedness community have been warning about since before Ebola was even on the CDC’s domestic radar.

If this virus (or any other contagion) spreads like it did in Africa, our entire health care system will be paralyzed.

Now imagine a highly contagious virus like the Spanish flu and “paralyzed” is essentially how we could describe emergency response.

The Best Life Hacks That Can Help You Survive