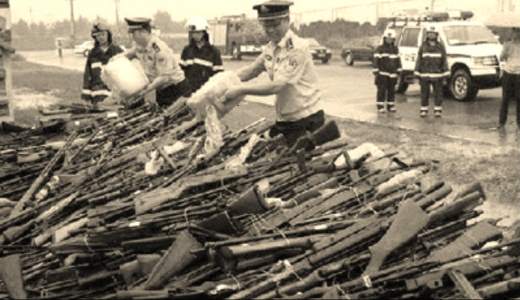 A draconian gun control bill set to be voted on by the California legislature would allow police to confiscate a person’s firearms solely on the basis of an accusation made against the gun owner by a family member or a health professional.

Although the bill was amended after an onslaught of complaints, the legislation is still being labeled as the harshest gun control law in the country.

AB 1014, authored by Assemblymembers Das Williams and Nancy Skinner, would create ‘gun violence restraining orders’ that would allow police to proactively confiscate firearms and hold them for one year with no due process merely based on an accusation made by an immediate family member, a law enforcement officer or a health professional.

“This bill would allow a search warrant to be issued when the property or things to be seized are a firearm or firearms or ammunition that is in the custody or control of, or is owned or possessed by, a person who is the subject of a gun violence restraining order and who is presently known to have in his or her custody and control or possession, or to own a firearm or firearms or ammunition,” states the bill.

The accusation against the individual has to meet the standard of evidence, “to believe that the subject of the petition poses a significant risk of personal injury to himself, herself, or another by having under his or her custody and control, owning, purchasing, possessing, or receiving a firearm,” states the bill, although the nature of this evidence is not properly defined.

The bill has drawn fiery criticism from gun rights advocates who see the legislation as an onerous assault on the Second Amendment.

“If for example, person A goes to a judge and files a complaint about person B, person B can have his/her guns and gun rights taken away without any idea why or even have the chance to plead their case. Only after law enforcement searched person B, their family, friends, place of work, and anywhere else police might have thought person B hid guns would that person have the right to defend themselves. Guilty until proven innocent,” writes Yehuda Remer.

“This bill goes too far,” Sean Doherty of California Assn. of Federal Firearms Licensees told a Senate panel. “AB 1014 shreds the right of privacy and right of property that has been jurisprudence for decades.”

Even David Warren, of Taxpayers for Improving Public Safety (a group that normally supports gun control legislation), spoke out against the bill, stating that it had “significant constitutional deficiencies” and would not be enforceable.

Having been passed by the California Senate Public Safety Committee, the bill now heads to the legislature for a full vote.

Editor’s Note: Please notice the striking similarities between this bill and the “Pause for Safety Act” being pushed at the federal level by Dianne Feinstein and Barbara Boxer (among others).

10 Facts About The SWATification Of America That Everyone Should Know

Why I Cannot Support Concealed Carry Weapons Permits (And Why You Shouldn’t Either!)