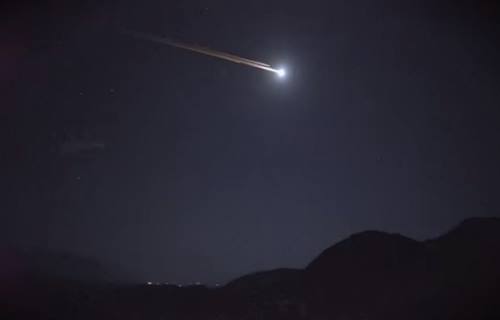 At approximately 0440 UTC, which is 12:40 AM eastern US time, the government says that the second stage of a Chinese CZ-7 Rocket, re-entered earth’s atmosphere and reports claim it crashed in the southwestern United States.  The rocket was seen over Utah, Nevada, New Mexico and parts of California as it went down in bright, flaming, radiance.

Video is emerging throughout Social Media of this event.

Witnesses report hearing a loud “boom” after the rocket fell past their horizon, likely the sound ofland impact, which they say arrived back to them about 5 minutes later.

According to government officials, this was the second stage from a Rocket which China launched back on June 25, but this explanation does not seem to fit the facts.

Had the government known this was going to take place, as a general rule the public would have been told.  There was no advance warning to the public that we are aware of, or that we can find in various news outlets worldwide.  So it appears the government was taken by surprise that this occurred.

Further, military units were “scrambled” in several locations along the West Coast in the minutes prior to impact, leading some people to personally conclude the military may have thought the US was under attack!

The idea that a rocket launched from China has struck the continental United States is troublesome to many given the tensions between the US and China over islands in the South China Sea. Sources in the military whom we spoke to are wondering “Did China just send the United States a warning message about any potential military conflict in the South China Sea?(source)

We may all know, quite soon.