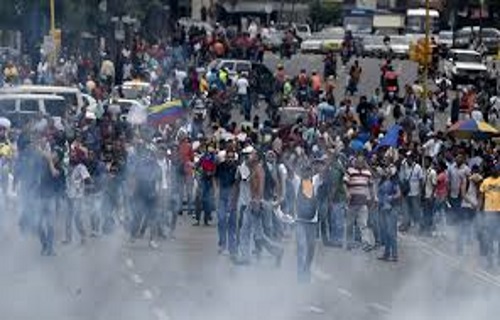 The Controlled Collapse Can’t Be Stopped Even If Trump Tries

President Trump declaring America bankrupt and announcing that in 2018 is of course totally hypothetical. Even so, it is very possible for that to happen because someone soon will have to declare America bankrupt. Who better qualified to negotiate the financial restructuring of the United States than someone who has gone through multiple bankruptcy experiences? Is Trump a man born for such a time as this? Donald Trump’s resume in bankruptcy is quite impressive.

In all cases, the Trump enterprises could not make the payments on the debt so the debt had to be restructured or investors would have lost everything. Trump lost most of his own ownership stake and control of these properties in the negotiations but the debt was restructured.
After a company goes through a Chapter 11 bankruptcy, and survives, it does have a chance of becoming great again. Maybe taking America into bankruptcy restructuring is the most realistic way to make America great again. Trump, probably thinks that will not be necessary if he is elected President. However, I think he will find out differently when America finds itself back in recession in 2017. Then you might hear the slogan “Obama lied and the economy died”!
America is about 200 trillion dollars in debt if you count the unfunded liabilities. There simply is no way for this nation to pay what was promised. America cannot pay much of its future liabilities and is technically bankrupt. The restructuring of America will have to be renegotiated and it will be painful for all.

Trump gets into office and inherits the 2017 recession. By 2018, Trump declares America bankrupt because “Obama lied and the economy died”. Trump tells the taxpayers, the debt holders, and those expecting entitlements that all will have to make concessions and negotiate a great deal to make America solvent again. The following might be some of Trump’s hypothetical proposals along with some of his hypothetical explanations (in parentheses) as to why.

RELATED : Dr Paul Craig Roberts WE ALL MIGHT BE DEAD SOON – This Generation Will See A Total Crash Of The Old Economic System

Some of that might sound liberal, but Trump is old school liberal within his common sense capitalist ways. Trump is not a Communist like those that took over the Democratic Party.

A plan like this could reduce federal government outlays by 1/4th and increase government revenues about 15 to 20 percent. That would more than balance the budget. Would it make America solvent again. Sure. Will it pass congress? Some of this would have to occur anyway if a balanced budget amendment to the Constitution were passed or some impending debt default forced Congress to take action.

When Trump declares America bankrupt in 2018 and restructures the financial system is that going to make America great again? Not unless other changes are also made that reestablishes morality, strong families, real education, work ethics, patriotism, integrity, parental rights, rule of law and God. Only God can make America great, but most in America have no room for God or they have an American idol in place of the real God. Ted Cruz is actually the best choice to lead the fight for the positive changes in values but Donald Trump is more likely to get the popular support needed for restructuring.

No matter who you vote for, some of this or even more than this will be required to make America solvent again. Donald Trump is the King of Bankruptcy and Trump very well could be ruling America during America’s bankruptcy and restructuring. Donald could even be America’s first and last king.

Service PMI drops to a three month low. CEO’s begin to warn that as the dollar continues to rise profits are falling and come 2017 earning are not going to look good. Gold is basically illegal in India. Italy seeks authorization to raise the debt. Italy is preparing to rescue their failing banks, the people will be on the hook. IMF Lagarde found guilty, but no jail time. The collapse of the economy cannot be stopped, not even Trump can stop what is coming.

Don Koenig is the founder of ThePropheticYears website. He has been publishing articles on the Internet on Bible prophecy, biblical discernment and Christian worldviews since 1999. You can find well over a thousand articles and thousands of comments written by Don from the homepage of this website.

Trump Tells America To Prepare For Week “That Will Change History” — The Damage Has Been Done And The Consequences Will Be Suffered: — The Controlled Collapse Can’t Be Stopped Declares America Bankrupt