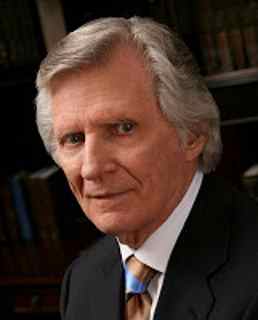 David Wilkerson had a series of visions and angelic visitations from the lord during his life time until his death in 2011, about the coming collapse of the U.S. economy and the destruction of America. In the economic collapse there will be riots and fires all across major cities in this nation. This will be a time of great apostasy and persecution in the church like never before. After the economic collapse of the United States the nation will be at its weakest point. A hydrogen holocaust will then sweep this nation in a Russian invasion of America. When Israel sees the destruction of America Russia will try to invade the Holy Land where 5/6th of the army’s of Russia will be destroyed by Jesus himself.

“Worldwide recession caused by economic confusion”
“At most a few more fat flourishing years, and then an economic recession that’s going to affect the life style of every wage-earner in the world. The world economists are going to be at loss to explain what’s happening. It’s going to start in Europe, spread to Japan and finally to the United States.”
There will be a move toward a worldwide, unified monetary system. The US dollar will be hit bad and it will take years for it to recover.
The only real security will be in real estate (until a somewhat later stage, at which point this apparent security will also disappear).
“Nature having labor pains”
Environmentalists will come under heavy criticism.
There will be major earthquakes.
There will be a major famine.
Floods, hurricanes and tornadoes will increase in frequency.
“A new kind of cosmic storm appearing as a raging fire in the sky leaving a kind of vapor trail.”
“A flood of filth and a baptism of dirt in America”
Topless women will appear on television, followed by full nudity.
Adult, X rated movies will be shown on cable television. Young people will gather at homes to watch this kind of material in groups.
Sex and the occult will be mixed.
There will be an acceptance of homosexuality, and the church will even say that it is a God-given gift.
“Rebellion in the home”
“I see the new number one youth problem in America and the world as hatred towards parents.”
“A persecution madness against truly Spirit filled Christians who love Jesus Christ”
There will arise a world church consisting of a union between liberal ecumenical Protestants and the Roman Catholic Church, using Christ in name only.
There will be a hate Christ movement.
There will be a spiritual awakening behind the Iron and Bamboo Curtains.
Others
There will be another wave of riots.
There will be a fall in moral conduct.
There will be a new drug that will be popular with teenagers that will break down resistance and will encourage sexual activity.
Homosexual and lesbian ministers will be ordained and this will be heralded as a new breed of pioneer.
There will be nude dancing in church, but this will never be widespread.
There will be occult practices in churches.
David Wilkerson Prophecy 1985
America is going to be destroyed by fire! Sudden destruction is coming and few will escape. Unexpectedly, and in one hour, a hydrogen holocaust will engulf America and this nation will be no more. It is because America has sinned against the greatest light. Other nations are just as sinful, but none are as flooded with gospel light as ours. God is going to judge America for its violence, its crimes, its backsliding, its murdering of millions of babies, its flaunting of homosexuality and sadomasochism, its corruption, its drunkenness and drug abuse, its form of godliness without power, its Luke warmness toward Christ, its rampant divorce and adultery, its lewd pornography, its child mmolestation its cheating, its robbing, its dirty movies, and its occult practices.
An attack from Russia, and “The great holocaust follows an economic collapse in America.

David Wilkerson Prophecy 1992
Thirty days of chastisement will fall on New York City such as the world has never seen. God is going to let down the walls. There will be unimaginable violence and looting. The violence will be so ferocious, it will shock the whole world. Our streets will be lined, not just with the National Guard, but with militia. A thousand fires will burn at the same time throughout the city. The Los Angeles fires were confined to a few sections of that city, but New York will be ablaze in all its boroughs. Fire trucks will not be able to handle it all. Trains and busses will be shut down. Billions of dollars will be lost. Broadway shows will stop completely. Businesses will flee the city in an unstoppable hemorrhage. Such things are expected in Third World countries, but not in a civilized nation like the United States. Yet, in not too long a time afterwards, New York City will go completely bankrupt. The Queen City will be cast into the dirt, becoming a city of poverty. What I saw coming will be much more severe. Indeed, if America rejects God’s call to turn back to Him, we’ll face the same judgments Israel faced. And they will hit not only New York but also every region in the country. Even the heartland won’t be spared. The nation’s economy will collapse, and violence will erupt. Fires will consume our cities, and tanks will rumble through the streets. pray that God would give our President the same spirit that Josiah had, to tremble at his Word.

David Wilkerson Prophecy 2009
An Earth-Shattering Calamity is About to happen. It is going to be so frighting. We are all going to Tremble, even the godliest among us.

For ten years I have been warning about a thousand fires coming to New York City. It will engulf the whole megaplex, including areas of New Jersey and Connecticut. Major cities all across America will experience riots and blazing fires such as we saw in Watts, Los Angeles, years ago in August, 1965. There will be riots and fires in cities worldwide. There will be looting — including Times Square, New York City. What we are experiencing now is not a recession, not even a depression. We are under God’s wrath

4 thoughts on “David Wilkerson Economic Collapse then A Russian Invasion”