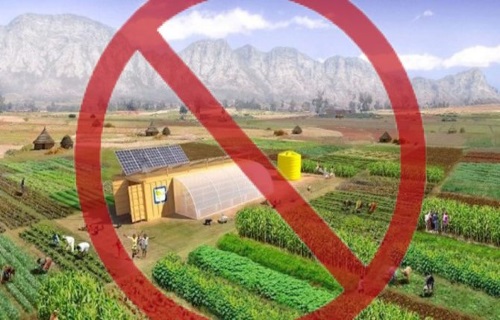 THEY DONT WANT YOU TO GO OFF GRID

You cant do that! Think about society and how we are all raised. Raised to conform into a little square box. Told we cant do this and we cant do that! ENSLAVEMENT. We all must go to collage. We all must buy the house and have the 1.5 kids. Even in daily life they dont want you to be independent. We need plumbers and electricians and doctors and lawyers and financial planners. WHY?

Because thats their job and NOT YOURS! Dont learn to do your own mechanical work. Don’t learn to be you own electrician. Don’t learn to set up your own solar or build your own house. WE THE PEOPLE must not learn to be versatile and independent of the system.
THIS is reality! FOR those of us who want to go off grid we are actually going against the grain of society. THATS WHY the government doesn’t WANT us to do THAT! So as Mr Hilder is captured during one of his rants, listen and hear what WE THE HILDERS think about ….YOU CANT DO THAT!! You may think twice about your own reality and going off grid and being a little more self reliant!

The off-grid lifestyle, enjoyed by an estimated 800 people, is now being threatened as county officials have recently made moves to essentially regulate and license the lifestyle into oblivion.

One of the major points of contention is the county’s attempt to ban camping on your own property, in an effort to force the off-grid homesteaders back onto the grid.

VIA : By Off Grid World

OK, here’s the deal. Off grid living is illegal. Sometimes. Sort of. Let’s start off by clearing up some misconceptions. In it’s most simplistic definition, being “off grid” is being disconnected from the public power grid. Off grid living by itself is not technically illegal. Producing your own power is off grid living and perfectly legal. Growing your own food is living off the grid, and legal. Building your own home in the country while not being connected to the power grid is off grid. So is raising livestock, building a greenhouse, planting your garden, etc. All legal.

RELATED : This “Farm In A Box” Can Provide Enough Food To Feed 150 People For An Entire Year

The problem arrises when overly restrictive city and county ordinances and zoning restrictions put a crimp on the off grid lifestyle and make it illegal to do certain things on or with your property. That’s when it becomes illegal to live off grid.

Technically speaking, it’s not exactly illegal to live off grid. The problem arrises from overly restrictive zoning and ordinances that disallow certain actions and construction on your own property.

In most places this means that if you want to get a piece of land, place a tent, RV, travel trailer or tiny house on it, and camp there while you build your dream cabin, then it’s most likely illegal to do that.

This unfairly and severely restricts your options, especially if you have a limited budget and can’t afford the permits required to jump through all the legal hoops most municipalities have created in their ordinances.

Counties should add allowances for off grid living and update their ordinances to reflect current technology. Originally, all ordinances were put in place for two main reasons. Health and safety. The other reason could be to generate revenue for the county through permitting and taxes. That’s ok, and fair.

However, it would be nice to update the ordinances to current 21st century based on technological standards and ability that was not available when most of these restrictive ordinances were voted into existence.

Allow Long Term Camping (with a stipulation you must be actively building a dwelling for the duration of the time you are camping): Being able to camp out on your own land while building a tiny house or cabin should be a right and there should be no ordinances which prohibit or restrict the size of dwellings except for maybe when children are present.

Minimum Dwelling Size on a PER PERSON Basis: Perhaps we can petition local counties to add into their current zoning codes and restrictions the ability to live in “small dwellings” between 100 to 500 square feet and or create a 100 square foot rule. For example, if you have 4 people in your family you will need a minimum of 100 square feet per person. meaning your dwelling would be required to be 400 square feet in size. That’s fair for everyone.

Allow Smaller Minimum Lot Sizes in Rural Areas: (Note: some counties already allow this) Change the ordinances in counties which restrict smaller lots, to allow the ability to split a larger property into smaller 1/2 to 1 acre parcels without having to submit and application for a subdivision, put in roads or sewer. Petition counties to change the minimum lot size to 1/2 to 1 acre. Make it easier to parcel larger pieces of land into smaller more manageable parcels. It would automatically produce more revenue in property taxes for the county.

Doing these three things would go a long way to making everyones lives much easier, and it would also generate more revenue for counties and municipalities through the USA.

It just makes sense to update all these outdated and unfairly overly restrictive ordinance which hinder progress and slows down advancement. It brings them into the 21st century and beyond into a brighter future for all.

Our lives have changed, our technology has advanced, and it’s now time for our laws to reflect those changes and allow us to continue to seek our dreams.

We can do this.

Food Preps: 30 Days Worth Of Food