Why you should build you on bunker

Build you and your family the Perfect underground Bunker with everything you will need in it to be Safe and Protected from a Wide Variety of Threats.

It’s wise to put some thought into defensive fighting positions that can be built into your shelter area before you begin construction. These positions should be on the perimeter of the shelter, and should provide a good vantage point for observing an approaching attacker. This can be as simple as a hole dug to armpit depth, wide enough for two people to move around within. Surrounding the perimeter of the hole with 12-18” of dirt will provide natural cover. You can then consider additions such as sandbags or metal drums for extra cover and foliage for camouflage.

Concealment & Escape Routes
If you’ve assessed the likelihood of a threat to your shelter and conclude that it does indeed warrant incorporating defensive positions and entanglements into the design, one of your first lines of defense will be concealment; ideally your entanglements and defensive positions will never be necessary. Considerations for concealment include keeping all structures to the lowest possible profile, covering your shelter with natural canopy and concealing as much of the structure with native plants as you can. If you can, conceal the entrance from a direct line of sight (behind a hill or in a natural depression). Avoid bringing vehicles near enough to leave tell-tale tracks or using the same foot path over and over.
Escape routes built in to the area can take the form of a well-camouflaged crawl trench or, for ultimate concealment, a tunnel constructed from a plastic drainpipe or metal culvert pipe. Escape route exits should be well concealed with foliage to prevent the likelihood of an ambush: you can use old pallets to brace the walls of a trench and then line the top with netting and interwoven foliage or even cover the top with plywood and then enough earth to render your escape route practically invisible.(source) 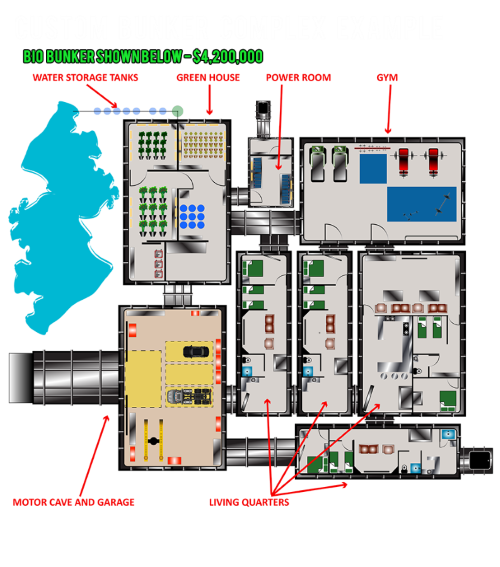 Anecdotal reports over the years suggest that the largest buyer of freeze dried goods from major freeze dried food manufacturers is none other than the U.S. government. One of our recommended emergency preparedness partners indicates that they serve not only retail customers, but government entities as well, including the Transportation Security Administration, US State Department, and the Department of Homeland Security.

The government is and has been preparing for something, perhaps many things, for decades. The very existence of FEMA and Department of Homeland Security suggests that they are planning for wide a variety of possibilities. To be clear, the fact that they are planning for something doesn’t necessarily mean that it will happen – just that it’s a possibility.

And how far out there is the US government when it comes to disaster planning and gaming emergency scenarios?

Consider an October 25, 2010 report from AOL News discussing the potential threat from an incoming asteroid. It may be the stuff of science fiction movies for most, but for White House Office of Science and Technology Policy director John Holdren it’s a possibility that cannot be ignored. In a series of letters to Congress Holdren outlines a plan for protecting the United States from a near-Earth object that is expected to collide with Earth; and implementing a deflection campaign, in consultation with international bodies, should one be necessary. The plan includes collaborative efforts between governments and militaries around the world in the event that NASA spots an incoming asteroid.

If nothing else, this proves that there are agencies within the US government that dedicate time, money (lots of it) and resources to the study of scenarios that can be considered The End of The World As We Know It.

Those very same people – your neighbors, friends, and family members – who may consider your personal preparedness efforts a little over the top would likely agree that the government spending billions of dollars on emergency preparedness is worthwhile project given the many possibilities for calamity to occur.

The issue, however, is that the government may be spending billions, but they cannot possibly prepare for widescale, total collapse situations where tens of millions of lives are at risk. It is simply not possible.

Our government, even if they tried, would not be able to stock enough food and resources for the entire population of the United States. They can’t possibly respond to widespread catastrophes that may include simultaneous nuclear, biological or chemical attacks on multiple U.S. cities, or an electromagnetic pulse threat from a rogue nation, or even a solar flare that threatens our power grid infrastructure.

The takeaway from understanding that the government is preparing for disasters is to acknowledge that, in an emergency, you and your family may be left floating up SHTF Creek without a paddle. The FEMA web site makes an effort to inform people that each individual should be preparing for emergencies themselves, though most Americans have ignored this, or are simply unaware that the recommendations exist.

In Food and Water in an Emergency  FEMA makes it clear that they may not be able to provide assistance. If an earthquake, hurricane, winter storm, or other disaster strikes your community, you might not have access to food, water, and electricity for days or even weeks,warns the report. The recommendations, similar to those we have made in our emergency preparedness reports over the last couple of years, suggest that everyone take responsibility for themselves, by taking some time now to store emergency food and water supplies, you can provide for your entire family.(source)

Doomsday Lairs! Elite Bug-Out Underground Bunkers And Cities Prepared For Major Catastrophe – The Elite Will Survive, Will We?

A Basic Guide to Shelters