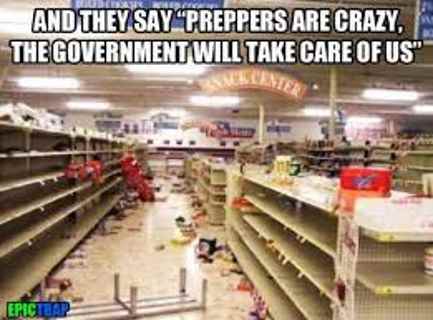 An economic collapse occurs when the government has no money. When the money runs out and an economic depression rolls in it is the beginning sign of a collapse. But as the depression continues for a longer and longer span of time, it becomes increasingly worse. This begins a true economic collapse and conditions can get very bad, very quickly.

What generally happens is that civil unrest begins, followed by increasing levels of poverty. The result is generally a lot of unhappy people and a big mess. It can even become dangerous to go outside because typical law and order break down. In these instances, survivalists are the ones who do the best because they are prepared for anything that comes their way.

The thing to understand about an economic collapse is that it could happen anywhere. It could even happen everywhere at the same time and that can lead to desperation and problems around the world. You never know what will happen when people start getting frantic. They don’t want to die (no one ever does) and so they do whatever it takes to protect themselves by any means necessary. You want to make sure that, no matter what happens, you and your family are going to be protected during these crises.

It’s important to mention that an economic collapse doesn’t have to mean a full meltdown of society as we know it. In fact, an economic collapse could happen just in your own family. People lose jobs all the time. It’s an unfortunate truth but it is most definitely true. So what would you do if your family lost their job? Would you be able to continue on in the lifestyle that you’re accustomed to or would things need to change? Some people are able to make it work, they cut back a little and everything is still fine. Some families, on the other hand, are devastated.

Eurozone crisis continues, 16 million people are in poverty or on the edge. Auto sales decline, this is being blamed on the weather, shorten months or any other excuse the US government & corporate media can come up with. Construction spending collapses, but new construction according to the government has increase?? Manufacturing continues its decline. Nations are stockpiling gold. Venezuela has been hit hard by inflation, food, medical supply and basic necessities shortages. This is a small glimpse of what a collapse will look like. Russia and Saudi Arabia continue to dump US assets.

The socialist government of President Nicolas Maduro had kept the price of corn flour frozen for 15 months at 19 bolivares a kilogram (two pounds).

But late Monday the government’s Superintendent of Fair Prices increased the price to 190 bolivares a kilo, or $19 at the government rate used for imports such as medicine and scarce food.

Flour is one of the most scarce food basics, and the Venezuelan Association of Corn Flour Industrialists has been asking for a price increase, arguing that the low government-set price does not cover the cost of production.

The Superintendent also said that the price of chicken would rise, up 13 times from 65 bolivares a kilo to 850 bolivares.

The price of chicken had also been frozen since February 2015.

Officials said in early May that the price of controlled products would be updated to better reflect the cost incurred by producers.

A “Law of Just Prices” sets a maximum profit margin of 30 percent for all goods and services.

But in the case of food and medicine, a senior official said that profits are “compressed” to between 14 and 20 percent.

Venezuela’s oil-dependent economy has been crippled by the plunge in price of petroleum on global markets.

Would you be able to sustain your loved ones when all hell brakes loose?In this video, I will unearth a long-forgotten secret that helped our ancestors survive famines, wars, economic crises, diseases, droughts, and anything else life threw at them… a secret that will help you do the same for your loved ones when America crumbles into the ground.I’m also going to share with you three old lessons

Venezuelans hit hard by food shortages, water cuts. Over the past few weeks, the economic situation in Venezuela has severely worsened. On Monday, a state of emergency decreed by President Nicolas Maduro came into force. The economy, hit hard by the fall in oil prices, has collapsed and daily life for Venezuelans has become an uphill battle. Faced with food shortages as well as water and power cuts, everyone is feeling the pinch and discontent is on the rise, fuelled by looting and endemic violence.

RELATED : What Really Caused The Great Depression? Will YOU Be Homeless After The Economic Depression – Preparing For A Long Term

Economic Collapse Preparation: What to Do When Everything Goes Crazy

In the event of an economic collapse, it is possible that your power and water supply might be interrupted, or that you will not be able to pay for these things. You will need a supply of clean water for drinking, cooking and hygiene. You can purchase bottles of water or store water in your own containers. If you run out of water, you can take steps to sanitize contaminated water.
Store at least one gallon of water per person for a minimum of three days or for up to two weeks. Don’t forget to include pets in this equation.
If you are storing water in your own containers, wash them first with dish soap and water and sanitize them with a solution of 1 teaspoon of liquid chlorine bleach to a quart of water.
To make water safe, you can boil it and filter it through a clean cloth, paper towel or coffee filter.

Preserving foods is essential as well.
You need to make sure that everything you purchase or everything you grow is going to stay useful for as long as possible. The best way to do this is to preserve it. Learn different types of preservation techniques and you’ll be able to store your food even longer. It will help you keep them healthy for your family as well. What you want to do is make sure that you’re keeping as much of the nutrients as possible when you preserve foods so look for ways that aren’t going to eliminate everything your body needs.

In a lawless place you may also need to do your own hunting for food and you may need to protect yourself from people around you (depending on just how bad things get). In these instances you need to have weapons and methods of protection around.

Create an emergency kit.
This is a collection of household items you might need in an emergency. In the event of an economic collapse, you may not be able to shop for these supplies, so it’s important to have them on hand. Keep your supplies in a container that’s easy to carry in case you have to evacuate for some reason.
Include an extra set of car keys, blankets, matches, a multi-use tool, maps of the area, a flashlight, a battery-powered or hand-cranked radio, extra batteries, matches and a cell phone and chargers.
Have some household liquid bleach on hand for disinfecting.
Make copies of all important documents, such as proof of address, deed/lease to home, passports, birth certificates and insurance policies.
Have a list of family and emergency contact numbers.
Include baby supplies such as baby food, formula, diapers and bottles.
Remember pet supplies like food, collars, leashes and food bowls.

Gather first aid and medical supplies.
You can purchase a first aid kit or put one together yourself. Either way, make sure it has all of the necessary supplies. Include personal items such as medications for yourself and members of your family. Check the kit regularly to make sure nobody has used any of the supplies. Also, check the expiration dates and replace expired items.
Keep a first aid manual with your first aid kit.
Include dressings and bandages, such as adhesive bandages in various sizes, sterile gauze pads and a gauze roll, adhesive tape, elastic bandages and sterile cotton balls.
Add equipment and other supplies, like latex or non-latex gloves, instant cold packs, a thermometer, safety pins to fasten splints or bandages, tweezers, scissors and hand sanitizer.
Have medicines for cuts and injuries, such as antiseptic solution like hydrogen peroxide, antibiotic ointment, calamine lotion for stings or poison ivy, hydrocortisone cream for itching and an eyewash solution. Include contact lens solution if necessary.
You have to be prepared!

Preparing for an economic collapse actually takes quite a bit. You need to be prepared for the monetary side and the less drastic effects, but you also need to be prepared for whatever might happen as a result of that collapse. Crazy things start to happen even in civilized societies when the money runs short and the supplies are even shorter.

Make sure that you’re prepared for an economic collapse by being prepared for anything. Have enough gold and silver stored away that you can still survive in the beginning but also have some supplies stored in case you need to go underground as well.”