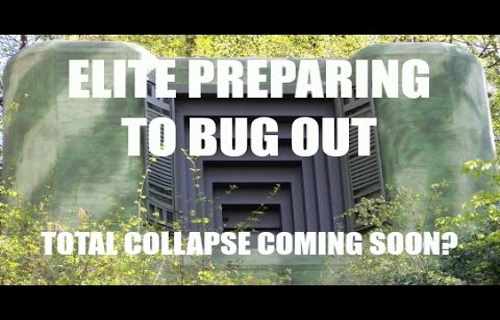 Elite Preparing For Years to Make Sure They Can Survive if The Power, The Food Supply, or The Entire Society Ceases to be Functional.

Many of the world’s elite, including hedge fund managers, sports stars and tech executives (Bill Gates is rumored to have bunkers at all his properties) have chosen to design their own secret shelters to house their families and staff.

“Some of my friends were, like, ‘The breakdown of society is imminent. We should stockpile food,’ ”

How many wealthy Americans are really making preparations for a catastrophe? It’s hard to know exactly; a lot of people don’t like to talk about it. Sometimes the topic emerges in unexpected ways. Reid Hoffman, the co-founder of LinkedIn and a prominent investor, recalls telling a friend that he was thinking of visiting New Zealand. “Oh, are you going to get apocalypse insurance?” the friend asked. “I’m, like, Huh?” Hoffman told me. New Zealand, he discovered, is a favored refuge in the event of a cataclysm. Hoffman said, “Saying you’re ‘buying a house in New Zealand’ is kind of a wink, wink, say no more. Once you’ve done the Masonic handshake, they’ll be, like, ‘Oh, you know, I have a broker who sells old ICBM silos, and they’re nuclear-hardened, and they kind of look like they would be interesting to live in.’ ”

Developers of community shelters like these often acquire decommissioned military bunkers and missile silos built by the United States or Soviet governments — sites that would cost hundreds of millions of dollars to build today.
The fortified structures are designed to withstand a nuclear strike and come equipped with power systems, water purification systems, blast valves, and Nuclear-Biological-Chemical (NBC) air filtration.

Most include food supplies for a year or more, and many have hydroponic gardens to supplement the rations. The developers also work to create well-rounded communities with a range of skills necessary for long-term survival, from doctors to teachers.
Vicino says Vivos received a flurry of interest in its shelters around the 2016 election from both liberals and conservatives, and completely sold out of spaces in its community shelters in the past few weeks.

For many Americans this may seem a bit strange, but the truth is that the worldwide economic slowdown that began during the second half of last year is starting to get a lot worse. In this article, we are going to examine evidence of this from South America, Europe, Asia and North America. Once we are done, it should be obvious that there is absolutely no reason to be optimistic about the direction of the global economy right now. The warnings of so many prominent experts are now becoming a reality, and what we have witnessed so far are just the early chapters of a crushing economic crisis that will affect every man, woman and child in the entire world.
The world’s elite are digging in like never before as mainline analysts and insurance companies warn of financial and societal collapse. The full-blown economic collapse that is happening in Venezuela right now is a preview of what Americans will be experiencing in the not too distant future.

Just a few years ago, most Venezuelans could never have imagined that food shortages would become so severe that people would literally hunt dogs and cats for food. But as you will see below, this is now taking place. Sadly, this is what the endgame of socialism looks like. When an all-powerful government is elevated far above all other institutions in society and radical leftists are given the keys to the kingdom, this is the result. Food shortages, looting and rampant violent crime have all become part of daily life in Venezuela, and we all need to watch as this unfolds very carefully, because similar scenarios will soon be playing out all over the planet.

If people are able to get their hands on some money, they immediately rush out to the stores to use it before the prices go up again. This has created devastating shortages of food, basic supplies and medicine.

One more thing – there are two collapses that will occur – one imminent, one protracted.

The first is systemic and secular. The entire house of cards will implode suddenly, as the writing was on the wall decades ago. Nothing can be done to prevent it, just as nothing can be done to prevent tectonic plate shifts that result in tsunamis obliterating beach front property. This collapse might come in 20, 30, or 50 years. I would wager certainly no more than 60 years, so make sure to lie fallow in your grave so your kids don’t piss on it for ruining their futures.

The second, which is going to happen sometime in the next year, is cyclical, much like the 2008 crash. This time, zero interest rates and QE won’t save the US economy, which means we will likely see an actual depression, double digit unemployment, and possibly another war as the USA attempts to drag itself out of a slump.

Obviously, they know something we don’t – well, to be more exact, I’ve known this for a while now, but most of the TV watching gizzards (aka 90% of the people reading this) are ignorant morons and think Trump will take care of matters.

Neither Trump nor Wall Street (nor the Fed) can control the capitalist system. It is a force of its own. It WILL implode due to its own contradictions – massive asset bubbles and unsustainable debt levels.

I have warned for a long time that the Federal Reserve is planning to destroy the U.S. economy by: printing the U.S. dollar in exponentially riskier quantities until it blows off the charts and crashes, and by easing credit and rates until the average individual and corporate debt loads are so enormous that the resulting massive distortions in the economy suddenly bring on an economic heart attack, leaving no possibility of a short or even medium-term recovery. That day is here!

There is nothing more important in your life right now than the exceedingly dire economic crisis unfolding as I write, and the state of your soul!

In other words, if your spiritual house is not in order, the building financial collapse will be so horrible that you will not be able to emotionally or mentally endure it, and I am addressing the healthy and strong here.

This collapse will knock you out cold, flat on your back, with violence, and most of mankind will never get back up. While the elite are sending signals to their friends that the switch has been thrown, that final preparations for safety are now in order, they are not saying how bad it will be. I believe that even the elite, such as Sir Templeton (more below) do not fully understand the implications of this crash – that this is the end of America as we know it.

Learning to cook from your deep pantry can made easier with the following books: