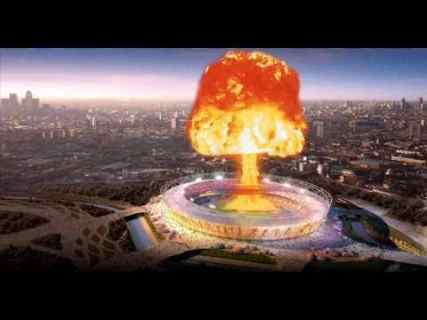 As mentioned toward the end of today’s False Flag Weekly News (see above, click here for story links)…

…Super Bowl XLIX will feature the Seattle Truthers (coach Pete Carroll is a 9/11 truth supporter) versus the New England Liars and Cheaters (exposed by DeflateGate). If Seattle grabs a big lead, as seems likely, will Bill Belichick orchestrate a fake terrorist attack to save his team from defeat? Or might the real terrorists behind 9/11 decide to bring down “the Big One” on Phoenix this year?

A terrorist organization implicated in the events of September 11th, 2001 is targeting Super Bowl XLIX, scheduled for this Sunday, 4:30 p.m. Mountain Time in Phoenix, Arizona.

The terrorist group calling itself NORAD (North American Aerospace Defense Command) has announced “we will have some planes” in the skies over University of Phoenix Stadium. The NORAD terrorists are currently running drills simulating terrorist attacks: “We’re practicing for what we’ll be doing during the Super Bowl,” said Mary McHale, a spokeswoman for NORAD (presumably with an ominous cackle).

Other pre-scheduled drills transpiring during the morning of 9/11 included one by the National Reconnaissance Office “simulating” a hijacked plane crashing into a high-rise building; and another, NORAD’s Vigilant Guardian, also a live-fly hijacking exercise, which also transpired during the exact same times that actual hijackings supposedly occurred; whose official purpose was “hijack multiplication, diversion and confusion,” i.e. inserting false blips representing imaginary hijacked aircraft onto the screens of FAA and Air Defense personnel.

Despite the fact that a live-fly plane-into-building exercise was ongoing on the morning of September 11th, 2001, the same Bush Administration that was running those exercises later lied through their teeth: “I don’t think anybody could have predicted that they would try to use an airplane as a missile, a hijacked airplane as a missile.” – National Security Adviser Condoleezza Rice, 5/16/02

FAA personnel were flabbergasted by what they saw on their screens on the morning of September 11th, 2001. Realizing that America had been attacked by NORAD insiders, not foreign terrorists, FAA controllers secretly tape-recorded themselves recounting in detail everything they had witnessed during the false flag attack. As the New York Times reported:

(The tape) was later destroyed by an F.A.A. official described in the report as a quality-assurance manager there. That manager crushed the cassette in his hand, shredded the tape and dropped the pieces into different trash cans around the building, according to a report made public today by the inspector general of the Transportation Department.

No reason for this destruction of evidence – a blatant felony under federal law – was ever given, and the “quality assurance manager” was never charged.

Will Super Bowl XLIX go up in the long-feared “Phoenix Fireball” ?

Many terrorism experts believe the city of Phoenix has been targeted for nuclear incineration. According to SK Bain, author of The Most Dangerous Book in the World, the freemasonic organized crime outfit behind 9/11 and subsequent “occult mega-rituals” is likely to nuke Phoenix.

Short answer: The name “Phoenix” refers to the mythical bird that incinerates itself and then is regenerated out of its own ashes. According to Bain, the American Eagle is actually a freemasonic phoenix; he quotes Manly P. Hall, author ofSecret Teachings of All Ages: “The American eagle upon the Great Seal [of the United States] is but a conventionalized phoenix.” The occultist criminals behind false-flag terror events plan to incinerate the old America, and then “regenerate” a new, totalitarian New World Order America out of the radioactive ashes of the old.

They intend to accomplish this, Bain suggests, by obliterating Phoenix, Arizona with a nuclear weapon. The subsequent state of emergency would indeed create a “whole new world” far beyond the one Philip Zelikow and other 9/11 scriptwriters brought into being in 2001.

Phoenix, Arizona is the perfect sacrificial victim not only due to its name, which symbolizes America (the “eagle” i.e. the phoenix) but also because it lies on the 33rd parallel. As SK Bain suggests, the 33rd parallel includes:

Charleston, South Carolina , birthplace of the Freemasonic “Mother Lodge of the World” (and the site of the beginning of the Civil War at Fort Sumter in Charleston Harbor, as well as the Concelebration of the enthroning of Lucifer in the Vatican) likewise at the 33rd parallel…the Trinity nuclear test site in the Jornada del Muerto (Journey of Death) desert of New Mexico, on the 33rd parallel…Harry S. Truman, 33rd Degree Freemason and 33rd President, who authorized the use of nuclear weapons on civilian populations…Nagasaki and Hiroshima, straddling the 33rd parallel.”

Bain quotes Sirhan Sirhan attorney Day Williams’ book Masons and the Mystery at the 33rd Parallel: “If a life is taken close to…the 33rd Parallel, this fits with the Masons’ demonic mythology in which they demonstrate their worldly power by spilling human blood at a predetermined locale.”

Super Bowl XLIX would be an ideal moment, from the terrorists’ perspective, for the Phoenix fireball. After all, the whole world will be watching; the Super Bowl draws over 100 million TV viewers, making this a perfect opportunity for world-changing shock-and-awe.

More esoterically, the numerological portents are disquieting. If we write the date of the Super Bowl in the manner of Illuminati numerologists, 02/01/2015 becomes 02012015, which adds up to their favorite number, 11. The number 11 represents the Twin Towers of Jachin and Boaz, the biggest symbol of freemasonry; the Twin Towers of September 11, the JFK assassination of 11/22, and NWO Armistice Day (11th hour of 11th day of 11th month) are just three of many examples of the freemasonic use of this number. For more, see my article 11 Questions for Veterans Day.

And if we write the date in the shorter fashion, as 02/01/15 or 020115 the digits add up to 9. So the date represents both a 9 and an 11…just like 9/11. The symbolism of the numbers 911 obviously means “dial up an emergency” and programs Americans to turn to their government for help. (Now who would have picked such a date for the “New Pearl Harbor“?) But 9/11 also represents the satanic illuminati wish to overthrow God, whose number is 10, the number of transcendence in the decimal system. Going straight from 9 to 11 means bypassing God and reaching a state supposedly higher than God.

Will the movers and shakers who control Washington DC, that gargantuan maze of freemasonic symbols, decide to “go to 11″ during this year’s Super Bowl?

It’s less likely to happen if enough of us let the bad guys know we’re on to their game.

Please forward this article to everyone you know.

Dr. Kevin Barrett, a Ph.D. Arabist-Islamologist, is one of America’s best-known critics of the War on Terror.

Dr. Barrett has appeared many times on Fox, CNN, PBS and other broadcast outlets, and has inspired feature stories and op-eds in the New York Times, the Christian Science Monitor, the Chicago Tribune, and other leading publications.Dr. Barrett has taught at colleges and universities in San Francisco, Paris, and Wisconsin, where he ran for Congress in 2008. He currently works as a nonprofit organizer, author, and talk radio host.