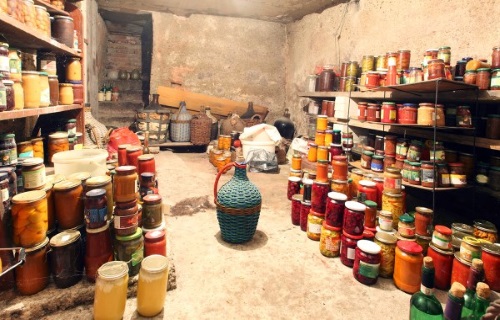 The Doomsday Clock is the closest it has ever been to midnight. 2-1/2 minutes.
And the current time does not account for recent global events…

The terror will paralyze most, who will do nothing at all due to shock and terror. There will even be those who will suffer heart-attacks from the fear and panic of the horrific event. Chaos.

The Doomsday Clock is a symbol which represents the likelihood of a human-caused global catastrophe and represents an analogy for the threat of global nuclear war.

Recent current events have led me to question whether or not World War 3 will remain “conventional”, especially given the crazed leader of North Korea – who has nukes…

In addition to storing the basic food items many people choose to supplement their food storage with frozen or preserved garden-grown fruits and vegetables and freeze-dried or canned produce. …

I’ve watched as the number of dealers in storage foods has steadily grown, overtaken only by the utter wildness of the claims made. “Freeze dried food is good for 156,239 Million, Billion years of storage”. (Hey, it’s only a matter of time before this isn’t exageration anymore). The strange thing is that the folks who actually produce these products only recommend a small fraction of the lifespan these sellers are advertising. So one of two things is happening here, either the resellers are doing some “value added life extension claims” to the products, or something more nefarious is happening. Since I believe that preparedness is a good idea, I offer these cautions for those considering purchasing food for long term storage or short term emergencies:

1) ALWAYS ASK WHAT THE DATE CODES ARE FOR THE PRODUCT or find out when it was purchased new.  I’ve seen 1970’s -vintage freeze dried products up for sale on eBay.  Not a big deal if you’re a camper who will use it immediately, but it’s useless for storage because it’s already at the end of its usefull life.  If the seller can’t (or won’t) provide the date info, pass on the purchase.  Would you buy last month’s milk from your local grocery store even if it was offered at bargain prices?  How about last year’s bread?  The same holds true with dehydrated or freeze dried canned foods.  They have a useful storage life.  After that runs out, I’m told they lose taste, color, texture, and nutritional value.

2)  LONGEVITY CLAIMS.  According to the producers, some freeze dried foods will last for 20-30 years,  but not all of them will!  And dehydrated foods will not last 30 years!  Most of the canners only give them a shelf life of 2-5 years for most items and some are even less.  I’ve checked with several meat canners and according to them, their products are only good for up to 2 years.  I see one of those canners products being advertised on eBay every week as being good for 10-20 years!  Now if your product lasted 100 years, wouldn’t you advertise it as such?   Doesn’t it make you wonder where the extended lifespans quoted (up to100 years!) on eBay are coming from?

3) STORAGE CONDITIONS affect the longevity of even freeze dried foods.  If the product has been stored in a cool, dry, environment, the food will last longer. On the other hand, if someone stashed their cans in the garage of a desert home three summers ago, they will likelyl be a total write off by now.  This applies not only to freeze-dried and dehydrated foods, but MRE’s even more so.

4) When in doubt, check with the canner of the food.  Many went out of business when we didn’t short circuit in Y2K, but there are many still in production, and most provide useful info on the longevity of their various food products.  Honeyville grain, and Walton Feeds have websites that both educate and inform, (not to mention offering broader selections and better pricing than you thought possible).  Both can be found in an internet search and both will give you an idea of how long their products (or similar products from other suppliers)  will last and what storage conditions are recommended.

Water is critical for survival. Yet most people have very little water if any stored for an emergency. Below are your options for storage, purification and treatment for disaster preparedness. We have 55-gallon water barrels for storage. Water Purification Tablets and Water Preserver Concentrate for long term storage treatment. We will explain the differences, advantages, and disadvantages to each option. Just visit each product you are interested in to see the differences. We have portable Water Bottle Filters that will purify 100 gallons of water.How much water should we store is also necessary for planning? There

How much water should we store is also necessary for planning? There are varying opinions about how much water families at home should store, I think it should be a minimum of one gallon per person per day for at least seven days, preferably fourteen days for drinking and hygiene. A family of four would need approximately 28 gallons for 1 week or 56 gallons for 2 weeks. Store tap water in newly approved barrels (airtight) and treat with “Water Preserver” concentrate for a five-year long-term storage.

Do not use old bleach bottles as they are not designed for long term emergency water storage and any bleach residue does not provide any benefits. The bleach bottles are not a safe plastic and should be considered hazardous for humans to consume water from. Using Bleach in an emergency is not a plan but rather a solution for those who have not prepared for an emergency or disaster.

Keep in mind that what you are buying is going to be eaten by you at some point in the future.  You will want it to be tasty, nutritious, and appealing.  Buy with that in mind.  In the event of an emergency, you don’t want to find that your food stores are the equivalent of dumpster-diving behind a burger joint.

Old West history expert – will show you what to do when there is no more ammo to be had, how people who wandered the West managed to hunt eight deer with six bullets, and why their supply of ammo never ran out. Remember the panic buying in the first half of 2013? That was nothing compared to what’s going to precede the collapse.