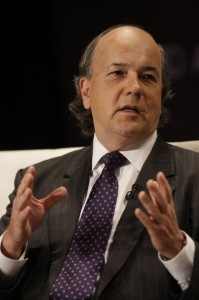 Financial expert and best-selling author James Rickards thinks the “international monetary system is headed for a collapse.”  Rickards contends, “It’s really not meant to be a provocative statement.  The international monetary system actually has collapsed three times in the past 100 years.  It collapsed in 1914.  It collapsed in 1939, and it collapsed in 1971.  When it happens, it doesn’t mean the end of the world or we all go live in caves.  We have a period of sort of economic confusion.”  Rickards new book “The Death of Money” is a road map for what is coming.  Rickards contends, “What I do for the reader is explain why the collapse is coming and, secondly, describe what this new system might look like.  That should be very helpful to investors in preparing to both survive the collapse and be well positioned in terms of wealth preservation under the new system that’s coming.”

What does the new system look like for the U.S. dollar?  Rickards says, “Here we are, again, looking at another collapse.  The problem today is we are on a global dollar standard.  A paper money standard can work, but only if you maintain confidence in the money . . . and you do that by running a good economy and having a good business environment . . . we’re doing the opposite.  We are printing a lot of money.  We have a lousy business environment.  Taxes are too high.  Growth is too low.  So, a lot of things are combining to undermine confidence in the dollar.  Rickards goes on to say, “The last time the system collapsed in 2008, the Fed rescued it.  How did they do that?  Well, we know the Fed printed over $3.5 trillion in new money in the last 5 years.  The Fed’s balance sheet went from $800 billion to over $4 trillion.  People understand that.  What’s less well known is the swap lines with Europe . . . European banks had dollar liabilities because they borrowed money in dollars. . . .   Where did the European Central Bank get the dollars they needed to bail out their own banks?  They got them from the Fed.  They gave us euros and we gave them dollars.  So, these dollar/euro swaps were in the tens of trillions of dollars. . . . In addition to that, the Fed guaranteed every money market fund in the United States . . . and they guaranteed every bank deposit in the United States.  Here you have a massive $60-$100 trillion bailout, not the $4 trillion you were told.  Fast forward to today. When the next collapse comes, it is going to be bigger than the last one.  It’s going to be exponentially bigger. The five biggest banks that were too big to fail in 2008, today they are bigger.  They own a larger percentage of the total banking assets. . . . When you double or triple the scale of the system, you don’t double or triple the risk.  You increase the risk by an exponent that could be 10 times or 100 times.”

On the Fed engineering another 2008 type bailout, Rickards claims, “The last crisis was barely enough for the Fed to contain.  They have used up all their dry powder.  They can’t take the balance sheet any higher.  They are already insolvent. . . . The Fed is insolvent.  If you mark their assets to market, they are leveraged 80 to 1, and interest rates have been going up.  So, a very small decline in the market value of their assets and it wipes out their capital.  It’s a very simple math.  So, we have an insolvent central bank.  The next crisis is going to be bigger.  You can see it coming.  It is going to be too big for the Fed.  They have taken their balance sheet to $4 trillion.  What are they going to do, take their balance sheet to $8 trillion and leverage 200 to 1? The game is up.  This has become very apparent.  They are insolvent on a mark to market basis today, not like next year or the year after.  They are insolvent today.”

Rickards foresees big inflation because the U.S. dollar’s buying power will shrink.  Rickards predicts, “Imagine gas at $20 a gallon and bread at $10.  That’s what we’re talking about.”  So, if big inflation is coming, what about gold?  Rickards says, “When I say the price of gold is going to $7,000 or $9,000 per ounce, which I expect it will, what I am really saying is the dollar is going to collapse 80% or 90% or more.”  It did in the 1970’s.  None of this is unprecedented, it all happened before.”

Rickards says, “When a collapse happens, it will happen quickly.  You won’t see it coming.  There won’t be time to run out and buy gold, and it probably will not even be available at that stage.  You need to prepare now.”

Join Greg Hunter as he goes One-on-One with

Warning: All Banks are Bankrupt and Insolvent. The whole system will Collapse — 19 Warnings About A Coming Global Financial Catastrophe