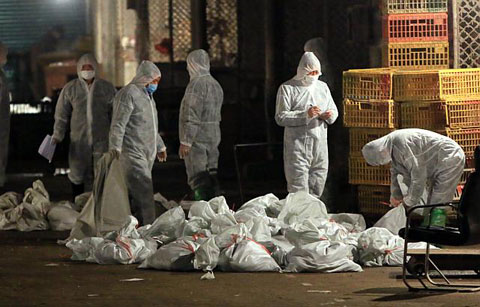 Soldiers from Fort Riley, Kansas, ill with Spanish influenza in a hospital ward at Camp Funston. The 1918 pandemic was one of history’s most devastating outbreaks of disease, resulting in an estimated 40 million deaths.

An international team of researchers has shown that circulating avian influenza viruses contain all the genetic ingredients necessary to underpin the emergence of a virus similar to the deadly 1918 influenza virus.

Searching public databases, the researchers, led by Yoshihiro Kawaoka of the University of Wisconsin-Madison, identified eight genes from influenza viruses isolated from wild ducks that possessed remarkable genetic similarities to the genes that made up the 1918 pandemic flu virus. The 1918 or “Spanish flu” pandemic was one of recorded history’s most devastating outbreaks of disease, resulting in an estimated 40 million deaths worldwide.

The new work was published today (June 11, 2014) in the journal Cell Host & Microbe. It shows that “there are gene pools in nature that have the potential to cause a severe pandemic in the future,” says Kawaoka, an international authority on influenza and the senior author of the new report.

To assess the risk posed by a virus that could acquire all eight of the 1918-like genes, the team used reverse genetics methods to generate a virus that differed from the 1918 virus by only 3 percent of the amino acids that make the virus proteins. The resulting virus was more pathogenic in mice and ferrets that an ordinary avian flu virus, but was not as pathogenic as the 1918 virus and it did not transmit in ferrets via respiratory droplets, the primary mode of flu transmission.

Since pandemic risk escalates when a virus become transmissible, Kawaoka’s group then conducted additional experiments to determine how many changes would be required for the avian 1918-like virus to become transmissible in ferrets, a well accepted model for influenza transmission studies. The researchers identified seven mutations in three viral genes that enabled the pathogen to transmit as efficiently as the 1918 virus. The resulting virus, composed of genetic factors circulating in wild and domesticated birds, demonstrates that the genetic ingredients for a potentially deadly and pandemic pathogen exist in nature and could combine to form such a virus, according to Kawaoka. Working within a biological safety cabinet, a researcher splits and redistributes cells at the Influenza Research Institute led by Kawaoka.

The new study is important because it shows the potential risk of circulating strains of avian influenza viruses, Kawaoka explains. Knowing what genes to look for, he says, can help predict the likelihood of an emerging strain of pandemic flu and, importantly, help scientists devise strategies for countering such a pathogen.

Critically, the research provides additional insight and evidence for the mechanisms responsible for adaptation of avian influenza viruses to mammals. One mutation in the novel transmissible 1918-like avian virus, for example, is responsible for increased virus growth in mammalian cells. Mutations in hemagglutinin, a protein found on the surface of influenza viruses that binds to host cells, alter the protein’s stability, a change that could potentially enhance the virus’s ability to infect the upper respiratory tract of humans. The same mechanisms were associated with effective transmission of H5N1 avian viruses, as reported in an earlier study, and the newly emergent H7N9 virus infecting humans in China also seems to possess some of the same qualities.

A key finding of the new study, notes Kawaoka, is that sera from individuals vaccinated with the current seasonal influenza vaccine (which protects against 2009 H1N1 influenza, a related virus) reacted with the novel transmissible 1918-like avian virus. That discovery suggests that protection against a potential pandemic threat exists in the currently available vaccine. In addition, the team showed that the novel transmissible virus is expected to be sensitive to the antiviral medication oseltamivir.

“Eventually, we hope to be able to reliably identify

viruses with significant pandemic potential so we can focus

The transmission studies were conducted under specially designed high-containment conditions, using commensurate biosafety practices, at UW-Madison with approval of the university’s Institutional Biosafety Committee.  The draft manuscript was reviewed by the National Institute of Allergy and Infectious Diseases (NIAID) of the National Institutes of Health (NIH), in keeping with the institute’s implementation of the United States Government Policy for Oversight of Life Sciences Dual Use Research of Concern.

“The point of the study was to assess the risk of avian viruses currently circulating in nature,” explains Kawaoka, who, in addition to his appointment as a professor in the UW-Madison School of Veterinary Medicine, holds a faculty position at the University of Tokyo. “We found genes in avian influenza viruses quite closely related to the 1918 virus and, to evaluate the pandemic potential should such a 1918-like avian virus emerge, identified changes that enabled it to transmit in ferrets.

“With each study, we learn more about the key features that enable an avian influenza virus to adapt to mammals and become transmissible,” says Kawaoka. “Eventually, we hope to be able to reliably identify viruses with significant pandemic potential so we can focus preparedness efforts appropriately.”

Preppers Are Now Considered To Be Potential Terrorists?