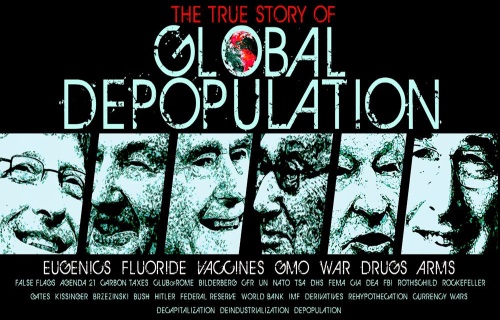 Their Plan To Exterminate 80% Of The World’s Population

The globalists have been working toward their goals for decades and what they want is nothing less than the complete subjugation of the people.

Rent in a lot of cities is over $1,000 for a one bedroom. Yet the minimum wage is only $7.50. They want you living 10 to a coffin apartment or living with your parent. The whole point is to stop people from getting a big house. They want you to live in the mega city stacked up like sardines. It’s all about saving the environment to the globalists, or at least it’s there excuse.It’s nearly impossible to rise up in this country now.

H.G Wells was a propagandist and social engineer that worked for the world elite. How much of his work was from his own mind and how much he was told directly to write is debatable. The Open Conspiracy calls for various things that either have been implemented since like a centralized world bank controlling all money creation, which all “world citizens” (at this point in time unwittingly) would pay a tax into. He also calls for eliminating property ownership, replacing individual land owners with “householders” or “tenants.” Other choice things discussed in The Open Conspiracy, and these are direct quotes, are Wells talking about the need for a “mental sanitation process” where feelings of nationalism are to be replaced with an acceptance being a “world citizen”. Wells says the main objective of the “Open Conspiracy” in the early stages of the social engineering process is to “disentangle all traditions, loyalties, and time honored ideas”, meaning loyalty to ones country, race and family. He also calls for education reform to have education that pushes “the cause of world reconstruction” as well as publishing books that push this idea and making sure all libraries are stocked with them. He also says the Open Conspiracy must “impose freedom”. Buy a hard copy of The Open Conspiracy.

The elite have long viewed a rising population as a threat to their dominance. They realized that eventually a large number of people will inevitably overthrow and remove them from power. They are particularly concerned with the middle class whose intelligence and capacity to organize makes them the biggest threat. Consequently, the elite plan to destroy the middle class and make all the of public equally poor and thus incapable of rebelling. As written on the Georgia Guidestones, they want a global population of just 500 million. This means 6+ billion people must die over the coming century.

In order to bring about global governance it is imperative that communism and capitalism be merged into a new system where economic control remains and is concentrated in private hands and social control is based on collectivism. As established by a U.S congressional investigation headed by Senator Norman Dodd into the great foundations back in the 1960’s, this was in fact one of the main purposes for which the foundations were created.

The evolution of society is not something the elite can leave to chance since society could evolve in thousands of different and unpredictable ways. If they were ever to allow this they might lose their control and dominance over us. In order to continue their position as the dominant minority, they plan decades and even centuries in advance.

Revelation of the Method

The elite’s do tell us through their books and publications, movies and news releases what they are doing – this is called Revelation of the Method. If you are too stupid to recognize it for what it is that is your problem from their point of view. It is a form of ritual mocking of the victim.
Criminalizing Natural Health, Vitamins, and Herbs.

The Codex Alimentarius is a threat to the freedom of people to choose natural healing and alternative medicine and nutrition. Ratified by the World Health Organization, and going into Law in the United States in 2009, the threat to health freedom has never been greater. This is the first part of a series of talks by Dr. Rima Laibow MD, available on DVD from the Natural Solutions Foundation, an non-profit organization dedicated to educating people about how to stop Codex Alimentarius from taking away our right to freely choose nutritional health. In this video she explains how the implementation of Codex Alimentarius will result in the death of 3 billion people.

For the New World Order, a world government is just the beginning. Once in place they can engage their plan to exterminate 80-90% of the world’s population, while enabling the “elites” to live forever with the aid of advanced technology. For the first time, crusading filmmaker ALEX JONES reveals their secret plan for humanity’s extermination: Operation ENDGAME.

For the New World Order, a world government is just the beginning. Once in place they can engage their plan to exterminate 80% of the world’s population, while enabling the “elites” to live forever with the aid of advanced technology. For the first time, crusading filmmaker ALEX JONES reveals their secret plan for humanity’s extermination: Operation ENDGAME.

Jones chronicles the history of the global elite’s bloody rise to power and reveals how they have funded dictators and financed the bloodiest wars—creating order out of chaos to pave the way for the first true world empire.

Never before has a documentary assembled all the pieces of the globalists’ dark agenda. Endgame’s compelling look at past atrocities committed by those attempting to steer the future delivers information that the controlling media has meticulously censored for over 60 years. It fully reveals the elite’s program to dominate the earth and carry out the wicked plan in all of human history.

Endgame is not conspiracy theory, it is documented fact in the elite’s own words.

The NEW WORLD ORDER Has Something BAD Planned
The health commission of Codex Alimentarius, and the subsequent legislation to come from it, has provable roots to Nazism, Communism, eugenics, and one-world government initiatives. Let’s put forth a few of the names and philosophies of the tyrants responsible for this proposed global health tyranny.

Grow your own vegetables and fruits, find a natural spring in your area and bottle your own water, become a hunter and eat more deer ( naturally hard for some), you can find local butchers who buy meat locally, usually these local farmers are not held to these standards…. yet. stop banking at major banks and pray to GOD you survive when it hits the fan.