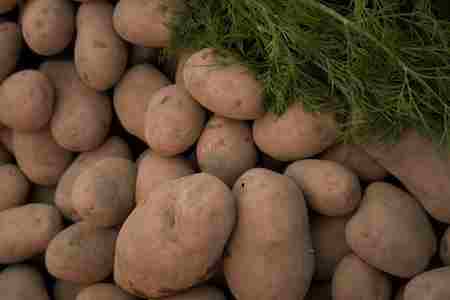 As a preparedness-minded person (& chief cook / bottle-washer), I often evaluate foods based on their shelf-life, ability to fill the eater up, adaptability in cooking, and how well they can extend the meal.  Potatoes really are winners in these ways.

If properly stored (in a cool, dark, somewhat humid place), they can last months and then the remaining ones can be used as seed potatoes for the following year’s planting.  A food source for “fresh” eating and a seed crop for the future-  pretty good.

Potatoes are well-known for being filling.  One of our regular rotations on the meal calendar is stuffed baked potatoes.  Any number of things can be “stuffed” inside them, from healthy broccoli to hearty chili.

The humble spud can be cooked in a myriad of ways at any meal.  Breakfast hashbrowns, homefries, scalloped, mashed, and on and on.  They can take center-stage as the main course or be content to be merely a side-dish.

One of the best aspects of potatoes from a preparedness standpoint is that they really help extend a meal.  I’ve heard tales of women “just adding another potato to the stew” when extra hungry mouths showed up during hard times.  Not more meat, of course, but another potato to fill another stomach.  When we eat stuffed baked potatoes, in the winter we often open just one large can of chili to spread over them and top with some cheese.  That’s pretty economical.

Nutritionally, they are pretty good too.  With their “jackets” on, they are high in potassium and Vitamin C.  They’ve gotten a bad rap in recent decades because of the way most of them are eaten these days- skinless and fried.  Of course, we are interested in getting the most nutritional bang for our buck too, so we’d plan to eat them prepared in the healthiest way.

As preppers, we should be giving more consideration to how potatoes may fit in our food plans.  That brings me to my present topic- a different way to grow them.

On just a quarter-acre of land, you can produce fresh, organic food for a family of four — year-round! This comprehensive guide to homesteading provides all the information you need to grow and preserve a sustainable harvest of grains and vegetables

A Primer on the “Traditional Method”

Most of us know that the edible part of the potato plant is the tuber that grows below ground.  Traditionally, you put a “seed potato” (a chunk at least 1″ x 1″ with a sprouting “eye”) in the ground and covered it with dirt.  As a new plant emerged, you continuously mounded dirt over it, leaving only a bit peaking out.  All underground parts would form tubers.

At the end of the season, you had to very carefully dig away the dirt to get the potatoes out of the ground.  I found this part to be so aggravating.  After months of carefully mounding the dirt and watering, a fair number of the potatoes were always pierced by garden fork or shovel.  Some could be washed and used immediately for dinner, but far too few were left to store and save for seed potatoes.

A New and Improved Method

A couple of years ago, I began to see articles about growing potatoes in straw.  That was very intriguing.  After more doing more research and reading anecdotes from all over, we have decided to try this method ourselves this year.  According to many of these folks, you not only don’t have the problem of ruining the potatoes as you dig them up, but the harvests are much better.

We have some sturdy old plastic bins around that we have decided to re-purpose as our potato gardens.  Being that this is an experiment, I only purchased a few pounds of organic seed potatoes for this trial.  As mentioned in previous posts, we are starting raised beds this year and I am “great with child” again (due in June), so I didn’t want to put too many new irons in the fire.

I first put several sections of non-slick/non-color newspaper on the ground beneath where the potatoes would go.  (This was to block out weeds from below.)  Then I pinned the paper in place with the plastic boxes.  I made mounds of  ”good dirt” (compost and peat moss) and placed the seed potatoes in them and covered them with more dirt.  I sprinkled organic bone meal on the soil also, since it helps in the formation of tubers.  (You do not want to add much nitrogen or you’ll get lots of leaves on the plants, but fewer tubers).  Then I piled straw over top of them in the bins.

As the plant tops grow through, we will add more straw (rather than covering with dirt).  We always had a problem in our traditional row garden with having enough dirt to continue to rake up the mounds of growing potatoes (and after a certain height, it just wanted to tumble back down or wash off with the next rain).  With high-sided bins and lots of old straw around, we hope to address this problem too. 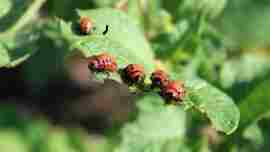 We’ve had a pretty bad Colorado potato beetle problem in years past.  I think I will try planting marigolds and nasturtiums in the bins with the potatoes.  They have helped with bean beetles and squash bugs, so maybe they will deter those ugly brown and yellow potato beetles too.

The only real issue I can see with regards to this method in our fairly warm climate is that the potato plants may get too hot.  They are considered a “cool weather” crop, meaning they tolerate cooler temperatures better than hot.  That’s why they thrive in places like Idaho.  We’ve had good crops in-ground in years past.  I’m wondering if they will get too hot this year without soil around them.  On the flip side, the straw will be mostly shaded by the high sides of the bin.  We’ll have to see how it goes.

At the conclusion of the season, we will tip the bins over and pull the straw away.  Hopefully, we will reach right into the straw and harvest a couple hundred pounds of perfect potatoes (at least those are the yields some people claim).

There are some other versions of this method.  One is to use old tires and stack them.  Plant the seed potatoes in one on the ground.  Toss straw over them as the plants grow and add another tire.  Keep going until you run out of tires or time.  Since all the covered plant is supposed to produce tubers (as long as they get sufficient water), you get a vertical growing space that can produce far more potatoes than a plant limited by the lower height of the dirt mound in the garden.

Another possibility I’ve seen is literally to plant the potatoes in the midst of stacked straw bales, adding as you go (like with the tires).

I’m excited about this less-work method of growing spuds.  At the end of the season, I’ll report back about how they turned out.

How to Do It: Practical Advice from the Early 20th Century

Monocultures: The Myth…the Reality…the Future – The Advantages of Growing Monocultures –

Food of the Future: Home Grown Spirulina Superfood Systems,How Spirulina works,nd how to grow your own