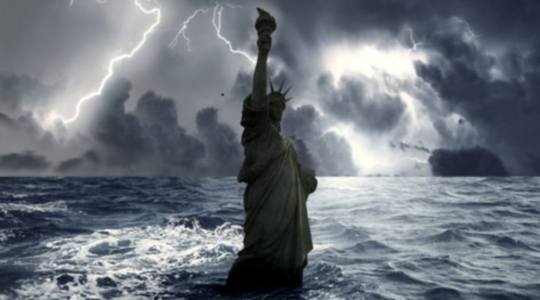 Back in the mid-2000′s, when jobs were plentiful and everyone was concerned with buying zero-interest homes, new cars and taking luxury vacations, Mike Malone from the Hidden Secrets of Money was warning of the financial and economic destruction to come. In his assessment, a crisis was imminent:

We now know that Malone was right.

In 2008 we saw asset valuations from stocks to commodities lose significant value. It was a deflationary impact so threatening that the U.S. government was on the brink of a collapse which subsequently led to members of Congress being warned that if nothing was done there would be tanks on the streets of America. This was followed by an unprecedented bailout package, which included an astronomical infusion of cash by the Federal Reserve under the direction of Chairman Ben Bernanke. Since then we’ve seen a massive reflation in a system where the economic fundamentals have only gotten worse – stock markets have hit all time highs, home prices have seemingly re-stabilized and personal debt is approaching 2007 levels.

Mike’s first three stages have, without a doubt, now come to pass.

If his forecast is correct – and it sure seems like it – then we will soon enter the next stage of this crisis and it will involve yet another deflationary hit to global asset prices. We know how destabilizing such an event can be from our country’s experience during the Great Depression. But as Mike notes in a follow-up to his original forecast, the next event will be nothing like what we saw during the 1930′s:

People don’t understand the scale of the emergency that’s going on right now.

They think that Ben Bernanke fixed things and that the economy is back on track, but the Fed is still doing emergency measures. They’re printing $85 billion a month – that’s over a trillion dollars a year… and people do not grasp the scale of the emergency measures that they’re doing right now.

There was just a little over $800 billion of base money in existence before the crisis in 2008… that’s 200 years worth of currency creation… So that’s 0.8 trillion… now we create a trillion every year… that means we’re creating more than 200 years of currency every single year.

…For him [Bernanke] to say that they’re not going to taper is an admission that they can never, ever taper… If they do the whole thing comes crashing down.

I think the crash of 2008 was just a speed bump on the way to the main event… the consequences are gonna be horrific… the rest of the decade will bring us the greatest financial calamity in history.

If Malone is right, then the next crash is going to be followed by something so severe that many have suggested our civilization may not survive in its current form.

Hyperinflation on this scale, originating in the United States, will lead to immediate global consequences. First, our systems of commerce break down. Next, the government will be left with no choice but to implement a state of martial law, something they have been war-gaming for years in anticipation of this very event. And finally, as noted by many contrarian experts, the world could very rapidly descend into widespread global conflict.

We are, by all measures, on the very precipice of what is potentially the most enormous financial, economic, and social collapse in the history of the world.

Both scenarios – deflation and inflation – are going to impoverish this nation and make it nearly impossible for people to acquire the basic necessities for life. One hundred million people are already struggling right now and are only capable of paying their rent and putting food on the table because of direct government assistance.

When the system collapses that assistance will not be enough and those who failed to prepare by stocking long-term food stores, gold and silver, and barter supplies are going to be living in horrific conditions.

This is big – and most people are completely ignorant to the possibility.

WALL STREET: The Next Financial Crash will be the End of America