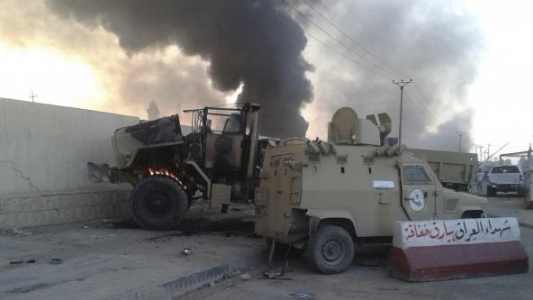 The crisis in Iraq continued this weekend with Sunni insurgents fighting under the banner of the Islamic State of Iraq and Syria (ISIS) continuing their push toward Baghdad. Iraqi Prime Minister Nuri al-Maliki has asked the Obama administration to intervene with airstrikes, but the president reportedly refused.

Instead, the president said that he would consider other options. By late Saturday, however the White House gave no indication of what the president had decided. Instead, it simply sent an aircraft carrier to the region.

The silence is part of Obama’s foreign policy process; the president takes his time (critics say he dithers) in making important international decisions. But some part of it is his reluctance to get involved in Iraq at all.

That’s because the American public is strongly opposed to spending more money, let alone troops, in a country that most consider a failure. According to a January Pew Research Center survey, 52 percent of Americans think the United States failed to achieve its objectives in Iraq.

The quick fall of northern Iraq is a testament to this failure. It also has very real consequences for Americans.

Here are five ways the collapse of Iraq could hit here at home.

Related: How Saddam Hussein Made the Middle East Stable

The threat to America and other Western nations increases dramatically. There have already been documented cases of American citizens fighting with ISIS. If the group were allowed to control southern Syria and northern Iraq, it would control territory larger than many countries. It could even form a government to govern the entire area.

This would effectively make this part of the world a safe haven for terrorists, just as Afghanistan was under the Taliban. These terrorists are already holding Western weapons abandoned by Iraqi troops.

Also, because some of ISIS’ members hold Western passports, they would be more able to travel to the United States and Europe. Sooner or later, they would strike here.

Related: Obama’s Use of Drones Gives Al Qaeda the Edge in Iraq

It could derail the world economy. The crisis in Iraq has already caused an oil shock, with energy prices spiking as ISIS advanced. If the crisis continues, you’ll eventually be paying more for gas.

But there is impact beyond the pump.

“The worst case scenario is that we see production from Iraq slip down to levels in the last Gulf war, then oil could spike $20 a barrel very quickly,” Ole Hansen, vice-president and head of commodity strategy at Saxo Bank told The Telegraph, a British newspaper. “In that scenario, the entire economic recovery, which is still fragile, could stall, and we could even slip back into recession in some regions.”

It makes the United State look terribly weak. The Obama administration effectively abandoned Iraq in 2011, trusting the Maliki government to protect the gains it made in a long, deadly war.

The loss of nearly half of the country shows that this trust was misplaced. The United States spent more than a trillion dollars in Iraq, and has provided the Iraqi government with tens of billions of dollars in aid. If the country fails, it would arguably be one the worst foreign policy disasters in the history of the country.

It could decimate military morale. The importance of the money lost in Iraq pales in comparison to the human cost American soldiers paid. According to the Pentagon, 4,424 died fighting in Iraq. Nearly 32,000 Americans were injured, some with debilitating wounds like the loss of limbs.

American soldiers also paid a heavy mental price. One in five has been diagnosed posttraumatic stress disorder. There are likely thousands of other undiagnosed cases.

When Fallujah fell, the Marines who fought there were furious that they had sacrificed so much for nothing. If the entire country were to collapse and the White House did nothing to stop it, American soldiers would likely be both devastated and angry.

It already has taken cash out of your pocket. The conflict in Iraq is an old one: Sunnis vs. Shiites. Iranian Shiites have already threatened to take up the fight against the Sunnis in Iraq; a move that would spark a refugee crisis similar to the one Turkey is having with Syrian refugees.

It would also add to the list of crises gripping the Middle East. The civil war in Syria continues. Peace talks between the Israelis and Palestinians have collapsed. Egypt is one year removed from a coup. Talks on Iran’s nuclear weapons move at a snail’s pace. The collapse of an entire country would add another to the list, and would arguably be the worst.

This could spook markets, which abhor the uncertainty caused by crisis; it’s why markets tanked at the end of last week.  This means it already has taken money out of your 401(k), your mutual funds and your bond holdings.