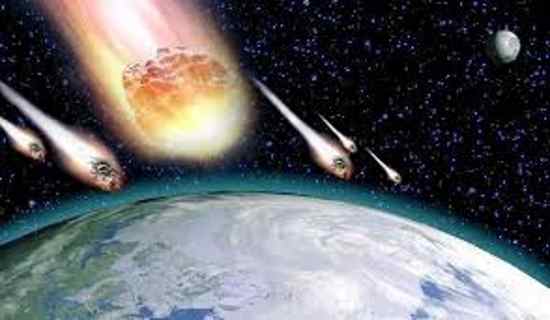 When the asteroid was first discovered the scientists would spend quite some time confirming size, speed, azimuth, force, orbit and so on. As it became increasingly apparent what it was and what was going to happen then the information would begin to leak out. At first the scientists would know the truth, then their lab assistants, family and friends: the government would find out early and would turn more resources towards confirming the first scientist’s findings. Meanwhile, although the scientists would have by now confirmed that the thing was, as Billy Bob Thornton says in “Armageddon”, a “global killer”, frantic efforts would be underway from the military while order still remains. They would be rapidly rehabbing old Cold War bomb shelters and re-stocking them. Even if all life is going to end, the important people will die last and in relative comfort.

Let’s assume two weeks have now passed since first discovery. By now, reports of the massive asteroid are showing up on the “tin foil hat” sites and the cover of the “Enquirer” and the rumors would be spreading rapidly, but the government would have to time its announcement just right. For them, it’s ok if the earth’s destruction is a rumor – rumors don’t cause the collapse of society. But the government confirming the facts will have foundational impact on the entire world.

From the UN possibly, the President comes on the air and spews the facts, what the facts mean and what to do about the facts. In this case, the fact is an asteroid is coming; everyone is going to die; there’s nothing we can do about it but we’re still trying. Perhaps this speech occurs sometime in the third week. The President of the US comes on the air, reporting from the UN after having called an emergency meeting in NYC. If they were smart, most leaders will have sent emissaries because there’s a damned good chance whoever is in NYC for the meeting is never getting home.

The President delivers his message. Meanwhile, most friendly nations who were briefed earlier would be delivering similar messages to their population. We have five weeks to live. At first there would be shock and tears, then denial. Most leaders would seek advice from their best scientists. A constant stream of both realistic and harebrained schemes to divert the asteroid, leave the planet, or find a deep hole would be put forth. The only serious plans would be to pray and dig deep, and both of them are useless.

Within a few hours society would begin to break down. Politicians, soldiers, policemen, shopkeepers, merchants, factory workers would come to the realization that nothing they do matters anymore and that soon they will all be dead. There would be a rapid collapse of all systems — no air travel, no trucking of food, no clocking in for work, no need to defend missile silos, no need to guard prisons or even imprison psychopaths or scofflaws. In the beginning there might still be some responsible resources remaining in place solely by habit or denial or sense of duty or honor, but this would not last. If the world were going to end in five weeks, you need to spend as much time as possible with your family and loved ones preparing for the end, not saluting some formerly “superior” officer. Money, credit, debt, saving — all means nothing now. Even gold has no luster. Since there is no future, there’s no need or use for money. The price of everything is what you are willing to do to take it.

Simultaneously many things would happen at once — mass suicides; looting of n0w-abandoned food and liquor stores; massive fires burning out of control as there would be little or no fire control or co-ordinated response; massive environmental damage as abandoned tankers, ships, barges and so forth crashed against the shore, unmanned and untended. Abandoned oil rigs would be spewing oil into the sea. Chemical plants would be venting poison into the air and water. Nuclear power plants might melt down irradiating thousands of square miles. The skyline would be ablaze and filled with smoke. Within days skyscrapers would be collapsing into the streets.

In most places power would still be on because the infrastructure can operate automatically for quite some time with no human intervention, and where it couldn’t there would be patchy brownouts and blackouts. The wireless phone system and the internet would continue to operate in a slowly degrading fashion as unattended systems succumbed to an absence of human management and an overload of people trying to reach loved ones for a last goodbye or message of love.

There would be open warfare in the streets as time went on, cars smashed into buildings, each other, people, on fire, the wounded screaming for help that will never come. There would be the stench of the dead as bodies pile up and there is no serious government response to collect them or dispose of them. Gunfire would be constant. There would be streams of people heading for the hills in a desperate attempt to flee the violence and survive just one more day. There might be neighborhood resistance groups designed to fend off mass attacks, looters and rapists, but there would be no organized military response. In fact, there would be deserters and even average citizens riding around in armored vehicles stolen from abandoned bases, using their firepower to take what they want with impunity. There would be no more organized air travel, simply people in whatever they could get airworthy flying away, away, away — not even knowing what they are flying towards, and often slamming into each other in the sky.

There would be orgies and drug parties and constant boozing, but most of the food and booze would run out by week seven, with still a week to go. By now the streets are unpassable, there are wild dogs and rats eating corpses, of which their are thousands. Skylines burn out of control and the skies are filled with smog and smoke and the smell of burning plastic and rotting corpses. The beaches are covered with oil and millions of dead birds and fish adding their stench to the mix. Electricity is sporadic and spotty as cars and vehicles slam into light poles and take down lines. Cell service is unreliable.

Masses of people would be praying at the churches, temples and mosques for God to appear and make this all go away and as time winds down, they would begin to realize that they were duped, God never existed because no matter what travesty He allowed us to do to each other, He would never allow the entire species to die if He truly existed. Some religious groups would see the destruction of the world as a sign to rise up and kill the others and there would be mass slaughter. In other places, racial or class strife would be occurring as the veil of civilization slips for the last time and the viciousness of animal-man emerges through the facade and revenge is taken for past slights, real and imagined.

Those who took refuge in their homes and were either capable of beating back looters or overlooked by attackers would have to accept that the end is at hand. Eating sparsely from the remaining cans, either by candle light or watching whatever remains of any news service on TV, or making love for the last few times, praying for forgiveness or reprieve, or snorting up the last lines of meth and coke, they would count the remaining hours.

Perhaps the sky would darken at the end, there would be a deep rumble as the asteroid approached and when it slammed into the earth massive quakes and tidal waves and hot gas shock waves would emanate from the strike point, reducing almost every building to a pile of burning rubble and crushing the survivors. Perhaps on the far side of the earth they must wait a few hours for the shock wave and the devastation. Perhaps the survivors of the initial blast die gasping as the atmosphere is blown away into space and a deep freeze envelops a vacuum that surrounds the earth and even the politicians in their deep mines succumb and die.

And it doesn’t really matter so much what other governments do, the impact would be roughly the same. Maybe in the more destitute areas there would be a sad acceptance earlier than in other places, but then the force of hunger would overcome any realization only this time there would be no more aid from rich nations or support from corrupt governments and their last moments would be spent in a battle for food or to escape cannibalism.

The question other responders frequently fail to address is why would the government or the military hold together under this scenario? These are institutions, not machines, made of men with families and real feelings. The concepts of duty, loyalty, honor, nation, responsibility, obedience and so on have a completely different meaning when one is suddenly faced with extinction. Surely some individuals would maintain their trained and habitual selves — but most would want to express those feelings on a smaller scale. Order would crumble quickly. Money has no meaning. There is no reason to take orders from higher “authority” any longer.

I think the realization that this is the case would cause the governments to withold information for as long as possible, because they would realize that order would crumble and the disaster I described would take place. Every additional day they delayed and denied and obfuscated would be one more day that the food trucks rolled, commuters caught their trains and babies were born in clean hospitals, not in a drain pipe under a crushed city. I wouldn’t blame them for that approach, especially if the end were inevitable. They would have nothing to lose, no impeachment or congressional hearing to face if discovered. Nationalism would be meaningless; flags would be nothing but colored cloth. Surely there would be enclaves of scientists desperately running simulations and seeking answers, and perhaps there would be last-ditch military strikes on the asteroid as it got close, all futile. But in the end, waiting til the last minute to confirm what everyone already expected might be the most merciful and noble thing a government could really do for its people.