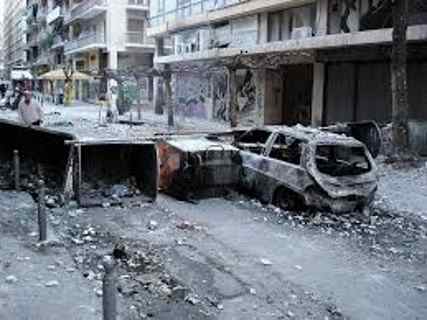 This video was made over two years ago and time is running out. He states from 5 to 15 years disaster will come to America. Three to fifteen years is now more appropriate timing. I believe it will be sooner.

It is time to leave Babylon America. Where should you go? You must decide, but I will give you a key of knowledge from Scripture.

Many will go to their own country (different countries) and survive, Jeremiah 51:9. When the Messiah returns, the angels will gather the elect from the four corners of the earth Mark 13:27. I recommend people to leave the North American continent, it will all be destroyed. A double portion of punishment is coming to Babylon, Rev. 18:6. I believe the double punishment will be:

1. America being destroyed by nuclear weapons.

2. Then a super volcano will erupt, most likely Yellowstone caldera. Both portions of punishment will be by fire as Rev.18:8 states. Keep in mind, there are over one hundred nuclear power plants on the North American continent, so imagine the devastation that will come from the meltdowns… Fukushima is one example.The Word states in Revelation 18:4 KJV “And I heard another voice from heaven, saying, Come out of her, my people, that ye be not partakers of her sins, and that ye receive not of her plagues”. Yahshua’s command for His people, is to leave Babylon in the last days, which is America. He is NOT going to have mercy on America when He destroys her.

This is the key for you or whoever.

Revelation 12:6 “And the woman fled into the wilderness, where she hath a place prepared of God, that they should feed her there a thousand two hundred and threescore days”. The time of tribulation is three and a half years. Revelation 12:14 “And to the woman were given two wings of a great eagle, that she might fly into the wilderness, into her place, where she is nourished for a time, and times, and half a time, from the face of the serpent [Satan]”. The same three and a half years. Daniel 11:41 “He [king of the north(NATO)] shall enter also into the glorious land [Middle East], and many countries shall be overthrown: but these shall escape out of his hand, even Edom, and Moab, and the chief of the children of Ammon”. This is southern Jordan. The wings are in Jordan, in the middle of the storm, where Yahshua will be glorified. The woman is the one who birthed Yahshua (Jesus). His people Israel will flee to the wilderness. Not the people in the land of Israel which are Jews but the true Israel are those who serve Him.

We are only as free as we believe we are. We are in denial, we don’t see the signs that are staring directly at us, keeping our minds turned off and busy with all the mundane affairs of daily life. If you would like to know the truth and wake up, it’s too late, removing your blindfolds and pulling your head out of the sand will only show that reality is already here and very clear.

There are approximately 600 FEMA Camp prison sites around the USA (and more literally popping up overnight). They are manned, but yet do not contain prisoners. What is going to be the nationwide panic to kick-off point to put these facilities into operation?

FEMA camps are a restricted area and surrounded by full-time guards, surrounded by miles of fences with the top razor points all directed inward. There is a railroad track that runs into the perimeter of this fence in all Camps. The loading docks also hold several railroad cars which have been manufactured in Oregon and outfitted with shackles.

FEMA Camps usually are in remote areas or have large mounds of dirt surrounding the central area so the area is not visible from the road. There are white vans as well as Police cars constantly patrolling the several mile perimeter of the areas, and will come out and greet you with a friendly wave if you come close enough to actually view the camp and follow you until you leave.

We just don’t care enough to find out the real truth, and settle for the hand-fed stories that come our way over the major media sources television, radio, newspaper, and magazines. The time is fast approaching when we will be the ones asking “What happened to our freedom? To our free speech? To our right to protect ourselves and our family? To think as an individual? To express ourselves in whatever way we wish?”

Since the introduction of central banking, inflation has eroded the wealth of the citizens, funnelling it to the elite. New methods of theft have come to light as a methodical and incremental introduction of taxing for every mile driven as well as taxing bank deposits is being rolled out in the U.S. The intention is full control of the monetary system and the ability to restrict travel to primarily between megacities, courtesy of Agenda 21.

Collapse of the Global Banking System Caused by Central Banks!

Central banks print currency which loan it to commercial banks at 0% interest rates who then loan it to the people at a much higher rate are consistently working against the public interest. Countless individuals have been looking into credit unions as an alternative means of storing their hard earned savings. The intention of this particular eCourse video is to highlight the need to focus on the currency itself, learning that savings should not be kept in the banking system at all, due to the inflationary policies PROMISED by the central bankers. REAL assets are essential for storing wealth.(source)