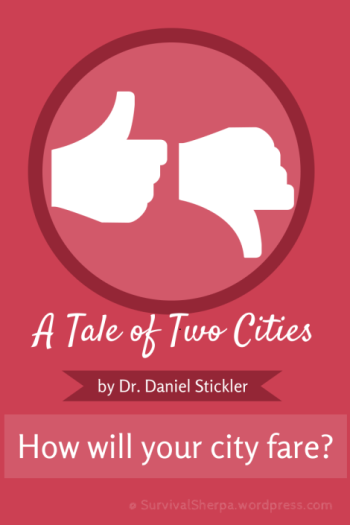 I live half of each week in Asheville, NC and the other half of the week in Charleston, WV, these cities are of similar size but the mindset of each group is very different.  Asheville would be a wonderful place to be if there were an “event” that took society back a century or two.  The population of Asheville has the mindset that makes them a great prepper society.  Many people raise their own chickens, have permaculture yards, have gardens, and there are many small farmers.  You have people with bees, people making butter, old-fashioned soap makers, and even people making clothes.  These are just some of the things you can find at any of the five or so farmers markets that are going on around town on various days of the week.  People here are also very environmentally conscious and active in promoting it.

Charleston, WV is very different, it has the potential to be like Asheville, but it is not and I am not sure why, especially with its recent history.  In July of 2012, Charleston was one of the hardest cities hit by the derecho.  Power was out over most of the state, the shortest power outage in our area was five days and these days were in the upper 90’s.  Gas stations could not pump gas, stores were closed but it did not matter because they had no drinks after day 2 and we had a boil water advisory.  People were panicking….no food, no water, no gas to get anywhere, and no air conditioning.

This was the first wake up call, some heeded this warning and did some stocking up but many sat back and blamed the government for their failures.  Round two occurred just two weeks ago; a toxic organic chemical used to process coal leaked around 10,000 gallons into the river a mile upstream from the water processing plant that supplied water for over 300,000 residents.  Not sure who allowed this chemical to be stored upstream in the first place but the tanks had not even been inspected for 23 years.  The EPA was not even familiar with the risks of the chemical.  Residents are told do not use the water for bathing, washing clothes, and certainly not for drinking.  All restaurants are shut down, stores are out of water and drinks within 24 hours.  The chemical is finally low enough after five days of this to allow some residents to flush their pipes, three days later we are told a new reading shows the level too high again.  People leave town because they have no water and cannot clean, cook, or stay hydrated.  You would think that most of these people would have been prepared.  Unfortunately, most did not learn their lesson the first time and now complained again about the government failing to take care of them.  Now, Charleston is the chemical valley, there are major chemical plants all up and down the rivers.  Coal and the chemical industry is the life-blood of this region and the reality is; this was going to happen at some point.

I tell this story to first illustrate the point that few people are prepared for these short term emergencies and live in a world where, in their opinion, the government will be there to help.  This demonstrates two emergency situations in a short time frame in one town.  Secondly, I bring this up because it is a real test of preparation.  I had water and food and at no point did panic set in.  I also had a back-up, Berkey water filters, and so I did not concern myself about the water running out.  The black carbon filters along with the PF-2 chemical filters can pretty much make any water potable.  I do not keep a huge stockpile of dehydrated and canned food (3 months for 7 people) and you will see my reasoning in the next part of this article.

Let’s start by asking: what are you prepping for?

EMP, solar flare, computer attack that shuts down the grid?

It’s really not possible to adequately prep for all of these so you are really taking a gamble if you select one to be your focus.  Also, lets face the fact that in some of these scenarios – does it really matter?

Let’s first eliminate super-volcano and major environmental shift, not only would survival be near impossible but life would be pretty miserable for those that did.  Now pretty much all other scenarios will involve a significant culling of the population but the time frame for this culling is what will dictate the adequacy of the preparations.  If a massive pandemic quickly eliminates 80-90% of the world population then the mindset of most preppers will be justified.  By this, I mean having a retreat or homestead with plenty of stockpiles would be beneficial.  However, the other scenarios where the culling is gradual then this type of mindset could get you killed.

If the grid goes down, people will get desperate and the more hungry they become the more desperate they become.  Desperate people will not reason with morality in mind.  Violence will undoubtedly run ramped and gangs will form up knowing the power in numbers.  The cities will quickly empty and these gangs will head for the countryside’s.  You say you have guns but so do they and they will significantly outnumber you.  Unless you are prepared to spend a few years in a nuclear missile silo then you will lose your preps.  No matter how fortified and well armed you are, you will eventually be overrun.

What about food?  You cannot sustain yourself on years of dehydrated and canned foods.  The slightly unbalanced nutritional mix will eventually catch up with you.  Some have said they could hunt for their food.  Think again, based on the deer population and the number of hunters, the deer herd will be completely wiped out in a few weeks and besides a gunshot in the woods will be like a dinner bell for everyone else out there with a gun.

What about the heirloom seeds you plan to plant to get your garden going?  Again, those marauding hordes will enjoy feasting on that garden when they come.

So what is my recommendation?

We need to get back to basics and learn to live like humans did for hundreds of thousands of years – like hunter-gatherers (HG’S).  Those that are successful at this will be the ones that will go on to build the next generation after an apocalyptic event.

Something that I have spoken about many times before is your health andfitness level.  So many preppers focus on their “preps” but that will be a limited resource.  If you are truly anticipating some major apocalypse then you need to focus on your own health and fitness.  HG’s generally do not survive long if they do not possess a certain degree of fitness.  First, you need to get any excess weight under control and work on resolving any health issues.  Those that are relying on medications to survive will likely not last too long.  Exercise, I am not talking about treadmills and nautilus machines.  I am talking about functional fitness.  Train like you will live.  Strengthen the movements that will be required for daily function.  Basic movements can consist of push-ups, squats, and pull-ups.  Add some long hikes with a pack and also throw some sprints in there.  When I say sprints I mean short bursts of running at your top speed.  Climb things.  Jump around.  Parkour training is an excellent option.

Water: This is life or death.  Learn to identify safe sources of water.  For several months you may be fine using portable filtration devices but these will eventually become depleted.  Learn how to derive water from sources in nature and how to use items in our natural environment to filter the water.

Nutrition: As I said, dehydrated foods will only get you so far and that assumes that you are able to keep your cache.  We must learn to forage off the land.  In most post-apocalyptic scenarios, we are going to need to be mobile at least for the short-term (a few years).  Our forests are full of life-sustaining nutrients and we need to learn how to obtain them.  Buying a book on edible plants and thinking that you will use it when needed is a recipe for disaster.  Many people will look at plants and identify them incorrectly in their field guide and end up poisoning themselves.  There are many available weekend courses on foraging.  Getting a good understanding of plants can also help with being able to identify medicinal species.  You will also need a source of meat.  One of the most successful hunting techniques is trapping.  These small animals are abundant and few of the surviving population will understand the techniques to obtaining them.  This also does not require a gunshot.

As things begin to settle down then you should also consider settling down but not as a mountain man hermit type.  Successful living will require community support.  Once the gangs have dwindled and died out, survivors will begin to gather together in communities to rebuild society.  It is helpful to possess a skill that can contribute to these groups; farming, making clothes from hides, medical care, bee keeping, and other more basic crafts.

I am not telling people to abandon their current ways of prepping but rather to think about contingencies.  Prioritize the process.  No matter what the scenario, your health and fitness level will be paramount so if you have neglected this area so far then make it a higher priority.  Spend some money on a personal trainer or nutrition coach instead of another gun to add to your stockpile.  Take a course on foraging instead of adding another 3 months of dehydrated food to your stores.  Lastly, organize around a group of people who have complimentary skill sets.

I will add that I am not someone who expects this societal collapse to happen but these types of events can be highly unpredictable so it is always good to be prepared as I have learned from experience.