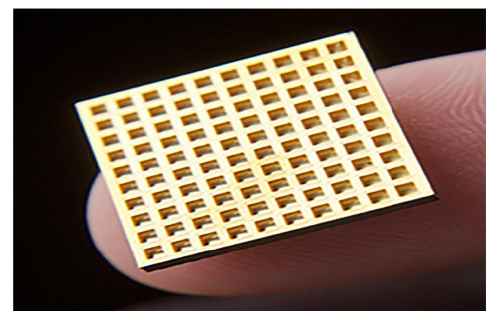 Implanted microchips enable on-demand drug release . Solid silicon microchips consist of hundreds of reservoirs filled with up to 1 mL drugs in an aseptic solid, liquid, or gel filing . The multireservoir microchips are hermetically sealed to avoid degradation and subsequently covered by an anode membrane which can be ablated electrothermally to release the reservoir contents . 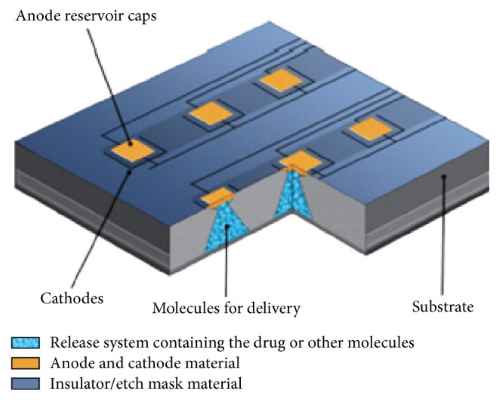 The first investigation of polymer microchip in vivo efficacy for brain cancer therapy provided evidence that microchips, paired with the correct application and therapeutic agents, could be clinically implemented. Varying doses of 1,3-bis(2-chloroethyl)-1-nitrosourea (BCNU), a brain cancer chemotherapeutic, were loaded onto microchips and subsequently implanted into the flank of rats, where gliosarcomas had been introduced]. The microchip-mediated BCNU effect on tumor size was compared to the standard of care, BCNU delivery from homogenous polymer wafers . By measuring the concurrent tumor size with treatment, the authors concluded that the microchip BCNU release matched the efficacy of the polymer wafer in a dose-dependent manner . As seen in Figure 5, the BCNU chip achieved comparable suppression of tumor volume. Applications within chronic conditions such as brain cancer, in which continuous and controllable local drug delivery to a difficult-to-access anatomical location is desired, indicate promising emerging fields for microchip technology.

The widespread application of microchip technology has the potential to be transformative to the modern healthcare system. Therapeutic processes will be changed, billions of dollars worth of unnecessary expenses will be avoided, and the quality of life of patient populations will increase.

While human studies involving microchips have been limited to treating a few specific diseases, advancements will allow expansion of this technology into a larger range of therapeutic areas. Drugs with dose delivery systems which would otherwise be considered difficult or undesirable could take place in passive manners. Treatments for diseases such as diabetes and hypertension where dose titrations are necessary could be revolutionized to create automated therapy regimens that are safer and more efficacious. When used in conjunction with implants, this controlled-release technology will decrease the likelihood of foreign body responses and rejection, therefore lowering the probability of inflammation and pain, allowing the body to heal faster after surgery. Applications of microchips could be extended to create artificial glands. Regulations of hormones in the body associated with dysfunctional glands could aid in both controlling current disease states and preventing the onset of other hormone prompted disorders.

Microchip delivery systems will aid in the treatments for diseases that classically include a lower rate of compliance (mental disorders, some cancer therapeutics, long-term antibiotics, etc.) or potential for abuse. An expansion in patient compliance will save billions in healthcare expenses every year through the reductions in hospital stays, doctor visits, and failures to follow prescriptions. Drug abuse could be better regulated for patients who receive schedules II and III classified treatments. Patients with addiction prior to implantation could be weaned off of their medication until they receive the intended set of benefits.

With advances in microchip technology itself, as well as trials demonstrating pulsatile release, stable drug pharmacokinetics, and utility and efficacy in treating disease states, microchip applicability is on the rise. Further research is required to establish clinical settings in which a drug (or health condition) requires local release, pulsatile control, and/or decreased compliance burden. Since the anode membrane is ablated electrothermally, the fate of the degraded byproducts on drug release, compatibility, and toxicity requires additional investigation in vivo.

Diabetes serves as the primary cause of death for 69,071 Americans every year, making it one of the top ten killers in the US. While still in development stages, microchip technology will have a large impact on the diabetes treatment landscape, saving the lives of hundreds of thousands of people. Current diabetes treatments are largely limited by delivery methods. Oral therapies offer a low bioavailability and relatively delayed impact. While liquid insulin (in the form of pumps or syringes) has a high bioavailability and fast entrance into the systemic circulation, patients are often deterred from considering it as a therapy option because of the need for self-injection. Furthermore, error in treatment occurs frequently with both methods of insulin therapy when patients give themselves the wrong dosage or forget to test their blood.

Construction of a high-level market model to forecast the future sales for a company that utilizes microchip technology begins with a measure of the size of the patient population and current statistics regarding treatment options. From these projections, estimates of conversion rates, pricing, and raw peak sales are determined . Raw peak sales were calculated for the year 2035, which would be reasonable if preclinical trials were currently underway. This estimate was used for the sake of modeling potential sales since no date is known for the start of research into its application in the diabetes field. Though the technology already has evidence supporting its efficacy, its modeled early stage in development and the large number of competitors in the insulin market yield both a low probability of success and a low market share. With these numbers handicapping the sales projections, Company X would still be near $1 billion in peak sales, giving the application of microchip technology in the field of diabetes a blockbuster status. 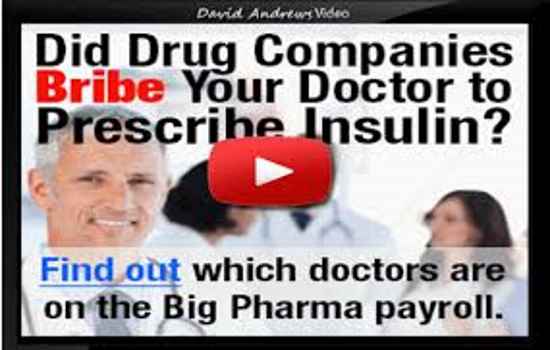 Most Powerful Natural Antibiotic Plants Native Americans Use , Which Cures any Infection in the Body and Kills all Parasites

Impressive Herbs with Antiviral Activity – Medicinal Plants That Can Save Your Life! Used in the 1918 Flu Pandemic, Can Be Effective Today For Preventation and Treatment of Covid Omicron Variant