The cost of food has been steadily increasing in places like Thailand and Venezuela as evidenced by the fact that since the beginning of 2014, riots are occurring in countries that are suffering through extreme food shortages. These mass protests movements may all have one thing in common, increasing food prices are the cause of the civil unrest. 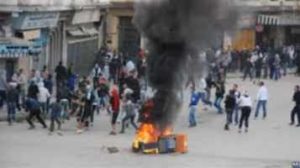 According to Dr. Yaneer Bar-Yam and his research colleagues at the New England Complex Systems Institute (NECSI), they are collectively stating that civil unrest, spurred by food shortages. may be anticipated for their effect by a mathematical model that correlates the variables of rising food costs, diminished and that are related to income and civil unrest. The present data suggests that America is ripe for the same kinds of civil disruption that we are witnessing in Thailand and Venezuela. How bad could the civil unrest become? Nobody can be certain except to say that America is entering into uncharted waters.

If one uses the violent civil unrest in Ferguson, MO. as a barometer of severity of the act of rioting, we need to realize that people are protesting the shooting death of one young man by a local police officer. Imagine how much more vitriolic these protests would become, how much more looting would take place and how many more people would be killed and injured if people and their children were facing starvation and these riots were food riots. The people of the United States are almost at the point of no return with regard to the coming food riots. 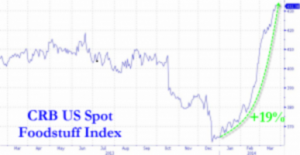 In the article, “Food Price Inflation Scares the Fed” the commodity food costs were exploding on the upside. Calculation of the food inflation rate, given the lag in commodity costs impacting prices on grocery store shelves, we find that the annual U.S. food inflation rate is now running at a staggering +22% and the rate is increasing with no end in sight to the escalation.

The real and specific cause for food inflation is the $940 billion of additional monetary stimulus from the United States Federal Reserve’s quantitative (bail out) easing over the last twelve months. Both the cost of food and gasoline inflation rates are awakening the variables associated with hyperinflation. Please note that the $940 billion of giveaway bailout money is nearly half of what we take in as a country in taxes. If you truly want to be accurate about America’s economic future, repeat the accurate mantra, “There will be no economic recovery” and “Many Americans are going to starve to death”.

A Snapshot of America’s Food Vulnerability

Almost beyond belief, a full 79 percent of the people that use food banks purchase typically buy cheap, unhealthy food and still just have enough to feed their children. The price of food continues to quickly out-pace the paychecks of most middle class families. For example, the average price of ground beef has just hit a brand new all-time record high of $3.88 per pound! There are nearly 50 million Americans that are dealing with food insecurity in various degrees of distress. Just over one out of seven Americans rely on obtaining food from various banks at one point or another and these food banks are beginning to experience record shortages.

In a case of “defend the nation and starve”, military families are feeling even more stress from not being able to obtain sufficient quantities of food as 25% of America military families require outside assistance in getting enough to eat. What does this say about an administration which uses our soldiers to defend the nation and then kicks them to the curb by denying their VA health benefits as the government also starves their families because they cannot survive on what we pay our soldiers? This is disgraceful, but it is the Obama fundamental transformation of American way!

America Has No Way to Keep Up with Food Inflation

According to the New York Times, the typical American family is now worth 36% less than it was worth only 10 years ago! Shockingly, one out of every six men, ranging in ages from 25 to 54, are not employed. Median family income in the United States is 7% lower than it was in 2000. The United States is now in 19th place in the world and falling. There is no way that the majority of American families can keep pace with food inflation as the wages of Americans are now inversely correlated with the rising food prices. This is a prescription for disaster. The most vulnerable to starvation within the present economic climate are the children as an amazing twenty six percent of all children are living below the poverty level.With these kind of distressing statistics, a significant number of Americans are vulnerable to politically motivated “food blackmail” in these times of economic distress.

There is historical evidence that food vulnerability may have been planned for a long time by elements of the U.S. government.

The US Government and Its Food Deprivation Policies 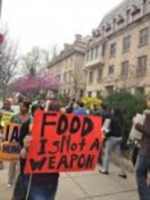 The use of food as a political manipulation tool, by the U.S. government, has been a matter of official U.S. governmental covert policy since 1974-1975.

In November 1975 President Ford, based upon the tenets of NSSM 200 outlined a classified plan to forcibly reduce population growth in LDC countries through birth control, war and famine. Ford’s new national security adviser, Brent Scowcroft, in conjunction with then CIA Director, George H. W. Bush, were tasked with implementing the plan and the secretaries of state, treasury, defense, and agriculture assisted in the implementation of these insane genocidal plans.

NSSM 200 formally raised the question, “Would food be considered an instrument of national power? Is the U.S. prepared to accept food rationing to help people who can’t/won’t control their population growth?” Kissinger has answered these questions when he stated that he was predicting a series of contrived famines, created by mandatory programs and this would make exclusive reliance on birth control programs unnecessary in this modern day application of eugenics in a scheme that would allow Henry to have his cake and eat it too in that the world would finally be rid of the “useless eaters!”

Third world population control, using food as one of the primary weapons, has long been a matter of official covert national policy and a portion of President Obama’s Executive Order 13603 (EO), National Defense Resources Preparedness is a continuation of that policy. Only now, the intended targets are not the LDC’s, but are instead, the American people and after Obama declares martial law, food will undoubtedly be used to subjugate the more resistant regions of our country.

The lessons of history clearly demonstrate that dictatorial regimes, whether they be Socialists, Communists, and Marxists will not hesitate to use food as a weapon against their own people in order to solidify power and impose absolute autocratic control. Food can be withheld from the masses by preventing it from being grown and harvested, by contaminating it and rendering it unfit for human consumption or by simply preventing food from being distributed to a targeted population. And there is a third strategy that the government can employ when subjugating a population by withholding food, that would be food which has a long shelf life. And this is exactly what we see, the Federal government is stockpiling survival food with a long shelf life.

As far back as 2008, I can find evidence that the government was attempting to stockpile as much survival food as possible. These events prompted prominent brokers and key media members to advise the public to begin storing food as long as six years ago in anticipation of what is about ready to happen.

In 2011, FEMA issued a “Request for information” (RFI), in which they inquired about the availability for 140 million emergency meal kits with a shelf life of 36 months along with blankets. Please read the FEMA document, listed below in the Appendix, and then I defy the reader to not be concerned about the long-standing pattern of this government in acquiring vast amounts of food.
Collision Course with Disaster

One can hope to survive if the government allows the banks to use the MERS mortgage fraud to seize your home. One can hope to survive if this administration seizes your guns. However, food inflation coupled with declining wages is a prescription for disaster. I do not think it is possible to overstate the dangers covered in this article. America needs to prepare to defend themselves. Buy survival food, store it and hide it!

The Federal Emergency Management Agency (FEMA) procures and stores pre-packaged commercial meals to support readiness capability for immediate distribution to disaster survivors routinely. The purpose of this Request for Information is to identify sources of supply for meals in support of disaster relief efforts based on a catastrophic disaster event within the New Madrid Fault System for a survivor population of 7M to be utilized for the sustainment of life during a 10-day period of operations. FEMA is considering the following specifications (14M meals per day):

Requested Menus to include snacks (i.e. fruit mix, candy, chocolate/peanut butter squeezers, drink mix, condiments, and utensils). All meals/kits must have 36 months of remaining shelf life upon delivery. Packaging should be environmentally friendly.

– Homestyle Chicken Noodles – Potatoes – Vegetarian Pasta – Green Pepper Steak w/Rice – BBQ sauce w/Beef and diced – Chicken w/Rice and Beans – Chicken Pasta The following questions are put forward to interested parties: 1. Please specify the type of organization responding to the questions (i.e. small business, large business, industry association, etc.) If a small business, please specify all Small Business Administration socioeconomic programs under which your organization qualifies. 2. Does your organization have a product available that meets all the specifications above? If the answer is “Yes:” What is the country of origin? If the answer is “No:” (a) Can your organization produce such a product? (b) What would be the product lead time? (c) What country are the manufacturing plants located in?

3. Can your organization delivery the product to a specified location within a 24 hour period?

5. What states do you already have contracts in place with to provide these types of products?

6. Please detail the type of meals and quantities you can provide for each day following a disaster.

7. Please provide alternatives to the meal specifications that your organization can provide.

8. What type of delivery schedule would your organization recommend for the meals

9. Does your organization have the capabilities to deliver products directly to FEMA’s CONUS Distributions Centers

10. Can your organization track deliveries from point of origin to point of delivery?

11. What is your lead time for delivery once FEMA has placed an order?

Interested parties may also provide brochures, web links, or other literature about their cots available for the specified users. Responses to this RFI are not considered offers and cannot be accepted by the Government to form a binding contract.

It Will Happen Suddenly