Truly, your ability to survive in a world that has been turned upside-down… a world which has been thrown into severe hardship and chaos… a world in which the wheels have come off, so to speak… a SHTF world, will to a large extent, depend upon your relativity to the following factor…

A human life existing within today’s modern civilization, is a life which is in all probability, ENTIRELY dependent upon a complicated and fragile set of systems, and a life which exists precariously close to the edge of a very steep cliff.

As has been written here many times before, our existence depends upon many systems coming together in synchronicity to provide us not only our life’s luxuries, but even our most basic needs for survival.

As our world grows in population, and our energy reserves are leveraged to keep the system’s gears turning, and as more strain is put upon the financial systems that have enabled the growth of our recent modern civilization, many of us have recognized the new risks and dangers which we face together, and are doing the best we can to prepare for a time where life may not be so cushy as today…

You’ve probably heard this before, but desperate people do desperate things. Your preps could be stolen. Your gardening and food preservation skills will be worthless when overrun by desperate hoards and gangs. ALL of your things, your security, will be at high risk due to the simple fact that there is power in numbers… and in this case, that power will be very bad indeed. While many will remain passive in hopes of a government rescue, some will die that way while desperate others will be angry, starving, savages. They will band together.

So, besides all the preps and skills that we could acquire as a life cushion for a SHTF world, there is another detail… a detail which may be even more important than your preps and skills… that is the population density of where you live.

While no man is an island, and no man can truly make it on his own (except for a very rare few), during a time of chaos when many of today’s luxuries have been taken away from the population at large, we as preppers stand a better chance of avoiding many of the horrible consequences that will exist in regions throughout the nation where large concentrations of people live.

On that note, I have copied a population density map from census.gov of the United States by County, which illustrates your region where you live. Have a look.

Do you live in an area where there are 250 or more people per square mile (red)? Or close by? If you do, this is a worst case scenario for you, and one you had better address.

If you live within the 50-250 people per square mile density (orange), you are at similar risk unless you live near the ’50′ end of the scale. However it is likely that you could be overrun by danger from the red zone next door.

It seems to me that the 10-50 people per square mile density (yellow) is desirable, providing enough support via a minimal infrastructure and manpower, yet not overrun with high population density.

The least dense zone, less than 10 people per square mile (beige), will certainly require that you have the ability to make it on your own to a large extent. While these regions will provide the most distance between you and the Zombie hoards or roving gangs, you will also be at risk in other ways by being very alone with little support infrastructure around you. 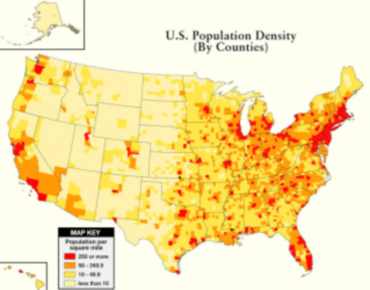 If you live in the red zone, or even the orange zone, your best bet for survivability will be to move to the yellow zone.

You might ask, “I live in a high population density area, but there’s no way I can move. My job is here, my home is here… What am I supposed to do?”

Answer: While it may seem to you like there’s little likelihood that things will ever get so bad that the red/orange zones will become dangerous, examine your personal risk tolerance and decide if you can live with that. You could alternatively explore a bug-out plan to somewhere more safe. How you do this is up to you, perhaps depending on who you may already know living out there, or what your opportunities and resources are to escape.

It’s something to think about, and I thought that this map would be useful for some of you to examine where you live, and to be aware of how many people are around you.

Who Will Be The Most Important People After Societal Collapse?

1 thought on “More Important Than Preps And Skills…”