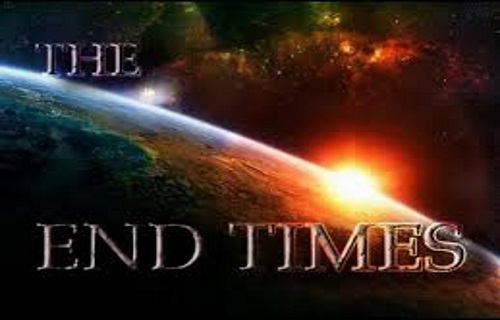 The end will come when mankind has been sufficiently warned by a global proclamation of God’s Kingdom—a world government that will replace human rulership. (Daniel 7:13, 14) Jesus Christ said: “This good news of the Kingdom will be preached in all the inhabited earth for a witness to all the nations, and then the end will come.” (Matthew 24:14) That preaching work, which reflects God’s justice and mercy, is part of a composite “sign” marking the time of the end. The sign also includes international warfare, earthquakes, famine, and disease.—Matthew 24:3; Luke 21:10, 11.

Besides foretelling world events, the Bible also gives us a social profile of “the last days.” We read: “Critical times hard to deal with will be here. For men will be lovers of themselves, lovers of money, . . . disobedient to parents, . . . without self-control, fierce, without love of goodness, . . . lovers of pleasures rather than lovers of God.” *
—2 Timothy 3:1-5.

Fulfillment: Famine caused more than 70 million deaths in the 20th century and continues to be a global problem.

What the evidence reveals:

According to the United Nations, hunger is the world’s greatest health risk, and 1 in 7 people worldwide currently do not have enough to eat.
“Today’s food shortages are not the result of one-time, weather-driven crop failures but rather of four critical long-term trends: rapid population growth, loss of topsoil, spreading water shortages and rising temperatures.”—Scientific American.

Fulfillment: Despite medical advances, millions still die each year as a result of infectious diseases. International travel and the world’s growing urban population have increased the likelihood that disease outbreaks will spread rapidly.

What the evidence reveals:

Smallpox killed an estimated 300 million to 500 million people in the 20th century.
The Worldwatch Institute reports that during the past three decades, “more than thirty previously unrecognized diseases such as Ebola, HIV, Hantavirus, and SARS have emerged as new threats.”
The World Health Organization has warned of the rise of drug-resistant germs, saying: “The world is heading towards a post-antibiotic era, in which many common infections will no longer have a cure and, once again, [will] kill unabated.”

Fulfillment: Hate-fueled genocide has claimed the lives of millions. In numerous countries, armed conflicts and crime have led to cycles of increasing fear and violence.

The Doomsday Clock guages how close humanity is thought to be to total annihilation. But scientists have now warned that humanity is on the verge of being wiped off the face of the Earth.

Reality of earth is Everything has to come to an end, sometime. Everything that has a beginning, has an ending.It is always important to know when something has reached its end .
Ends are not bad things, they just mean that something else is about to begin.
Is there any possibility that life will end on our planet earth ?

The genocidal depopulation plan generally involves poisoning or sterilizing people through the use of chem. trails or water fluoridation. Agribusinesses transnational like Monsanto are often implicated in some sort of scheme to monopolize the world’s food supply so it can be easily tainted with deadly toxins. Just about anything that can be said to involve “chemicals” can be implicated in this nefarious scheme: vaccines, alleged covert geo-engineering schemes, genetically modified food, etc. Variants of the theory include those with an anti-abortion tinge who incorporate conspiracy theories about Planned Parenthood, and AIDS conspiracy theorists who believe AIDS was concocted in a laboratory for the purpose of reducing the population. Another variant, largely attributable to Lyndon La Roche, has worldwide nuclear war as part of the conspirators’ alleged plan along with a deliberate economic collapse and de-industrialization to force the world back into a “new dark age.”
In this video You will get to know about some of the mysterious theories which tells us how earth will be vanished.

#1 Leonardo da Vinci was a true genius .Leonardo is widely considered one of the most diversely talented individuals ever to have lived .
He was constantly observing, experimenting, and inventing, and drawing was, for him, a tool for recording his investigation of nature
Leonardo Da Vinci like many other predicted that the world would eventually end one day. According to da Vinci, this would occur by means of a ‘Global Flood’ in the years 4006.
He said Seawater will rise above the high peaks of Mountains towards the Sky and will fall down again onto the dwellings of Men.
He believed that this would mark a new start for humanity

#2 Sir Isaac Newton was an English mathematician, astronomer, and physicist , who is widely recognised as one of the most influential scientists of all time and a key figure in the scientific revolution.
Newton’s Principia formulated the laws of motion and universal gravitation that dominated scientists’ view of the physical universe for the next three centuries
Though he was and still is renowned for his scientific pursuits, Newton was a serious student of the Bible and published several theological works
And when it came to predicting the end of the world, Sir Isaac Newton was just as precise.
He believed the Apocalypse would come in 2060
Newton based this figure on religion rather than reasoning.
In a letter from 1704 , Newton uses the Bible’s Book of Daniel to calculate the date for the Apocalypse.
The note reveals a deeply spiritual side to a man more usually regarded as a strict rationalist.
But he confidently stated in the letter that the Bible proved the world would end in 2060

#3 Stephen Hawking is one of the most famous scientists of the last century.
Hawking was the first to set forth a theory of cosmology explained by a union of the general theory of relativity and quantum mechanics.
Regarding end of earth Hawking said advances in science and technology could lead to the end of the world.
He said human aggression, combined with technological advances in nuclear weaponry, may lead to our end
There are an estimated total of 20,500 nuclear warheads in the world today. If the average power of these devices is 33,500 Kilotons, there are enough to destroy the total earth landmass.
Dropping one nuclear bomb is terrible enough—cities leveled, populations vaporized.
He also said that Climate change continues to escalate, with no end in sight.
We don’t know where global warming will stop
But the worst case scenario is that Earth will become like its sister planet Venus with a temperature of 250 Celsius and raining sulfuric acid. The human race could not survive in those conditions.
this could be the reason of end of world
Hawking said that artificial intelligence weapons could create “a global arms race” in the future.
Artificial Intelligence technology has reached a point where the deployment of such systems is — practically if not legally — feasible within years, not decades, and the stakes are high: autonomous weapons have been described as the third revolution in warfare, after gunpowder and nuclear arms.

#4 Some doomsday pundits predict that a giant asteroid will someday smash into our planet and blow us all from here
asteroid
what would happen if an asteroid hit the Earth
1. Any asteroid falling from the sky would have a tremendous amount of energy.
In 2028, the asteroid 1997XF11 will come extremely close to Earth but will miss the planet.
If something went wrong and it did hit Earth, what you would have is a mile-wide asteroid striking the planet’s surface at about 30,000 mph. An asteroid that big traveling at that speed has the energy roughly equal to a 1 million megaton bomb. It’s very likely that an asteroid like this would wipe out most of the life on the planet.

The Lost Ways 2 is a far–reaching book with chapters ranging from simple things like making tasty bark-bread-like people did when there was no food-to building a traditional backyard smokehouse… and many, many, many more!