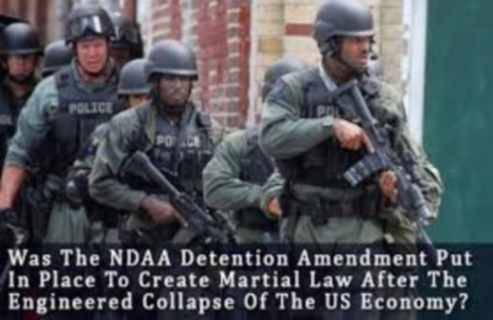 If you don’t believe that the American Police State is growing rapidly and that Christian right winged groups are targeted by the big brother police state, then I don’t know where you have been the past few years. It is time to pay attention or you will wind up in civilian concentration camps, or worse, being beheaded!
It is getting late to prepare mentally and ultimately to physically come out of Babylon when Yah/God makes a way to do so. The Ebola scare should be a wake up as well, along with the rise of Putin and the Russian Federation in the Ukraine. There really is a lot going on in the world today and you must draw close to Yah/God and seek His will for you.

Do you know what the last move of God is and what will cause the last four kingdoms in the earth to rise?
I believe that with President Obama, it will be full speed ahead with his agenda to destroy the American way of life by taking our guns, our Free speech, and many more freedoms, and finishing the job of the Socialization of the United States of America, not to mention his recent Ebola screwup of mammoth proportions!

Do you know about the National Defense Authorization Act which allows the US government to arrest and detain you without ever going to trial, and the chip (precursor to the mark of the beast) to be in the Healthcare Mandate in March of 2013? It was postponed a year!!

Just how should we prepare for the coming martial law in America and the ensuing Tribulation? Should we depend on and have faith for Yah’s/God’s supernatural protection and provision for the entire 7 years, or should we do something as well such as maybe finding a place off the grid temporarily before then? Do you know when to leave Babylon/America for a place of safety?

THIS IS WHAT WE HAVE TO LOOK FORWARD TO!
What country is it? America

I know that many would disagree with me, but I wholeheartedly believe the answer is that we should do something as well!! I believe we should get out of the way of the dangers coming, which are many. They are found all over this website. I believe that if you don’t prepare now, you won’t be prepared for Yahwah to use you in the end times. Prepare for the worst and hope and pray for the best! Is that a lack of faith? Not in my opinion!!

How To Prepare For Martial Law
Have a place prepared to go to, when leaving the cities for protection when civil war begins or when the social breakdown starts during World War III or possibly even before!
Have an emergency supply of 30 days minimum of food, drinking water, etc. and have safe access to water and food long term if possible!
Have those supplies not for yourselves only, but for other loved ones and brethren who haven’t prepared, because they didn’t think it was necessary!
Have a bug out bag prepared with the necessary items. Never have less than a half tank of gas in your auto.
Get rid of paper assets and replace it with gold and/or silver ( I have been telling people to invest in gold since 2007 when it was $850.00 an ounce )
Prepare for Martial Law in America  Click here for How To Survive Martial Law In America!