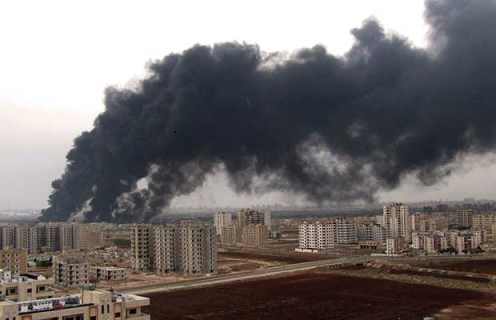 That’s exactly what many well-respected economists, billionaires, and noted authors are telling you to do — experts such as Marc Faber, Peter Schiff, Donald Trump, and Robert Wiedemer. According to them, we are on the verge of another recession, and this one will be far worse than what we experienced during the last financial crisis.

Marc Faber, the noted Swiss economist and investor, has voiced his concerns for the U.S. economy numerous times during recent media appearances, stating, “I think somewhere down the line we will have a massive wealth destruction. I would say that well-to-do people may lose up to 50 percent of their total wealth.”

When he was asked what sort of odds he put on a global recession happening, the economist famous for his ominous predictions quickly answered . . . “100 percent.”

Faber points out that this bleak outlook stems directly from former Federal Reserve Chairman Ben Bernanke’s policy decisions, and the continuous printing of new money, referred to as “quantitative easing” in the media.

Faber’s pessimism is matched by well-respected economist and investor Peter Schiff, the CEO of Euro Pacific Capital. Schiff remarks that the stock market collapse we experienced in 2008 “wasn’t the real crash. The real crash is coming.”

Schiff didn’t stop there. Most alarming is his belief that daily life will get dramatically worse for U.S. citizens.

Equally critical of the current government and our nation’s economy is real estate mogul and entrepreneur Donald Trump, who is warning that the United States could soon become a large-scale Spain or Greece, teetering on the edge of financial ruin.

Trump doesn’t hesitate to point out America’s unhealthy dependence on China. “When you’re not rich, you have to go out and borrow money. We’re borrowing from the Chinese and others.”

It is this massive debt that worries Trump the most.

“We are going up to $16 trillion [in debt] very soon, and it’s going to be a lot higher than that before he gets finished,” Trump says, referring to President Barack Obama. “When you have [debt] in the $21-$22 trillion [range], you are talking about a [credit] downgrade no matter how you cut it.”

Despite the overwhelming concern expressed by Faber, Schiff, and Trump, the most damning piece of evidence for immediate wealth destruction comes in the form of an ominous chart published last November that has been quietly making the rounds on Wall Street.

Shocking Footage: See the eerie chart that exposes the ‘unthinkable.’

The chart, recently republished by Mark Hulbert on MarketWatch, shows a direct correlation between today’s stock market and the one leading up to the historic 1929 collapse. 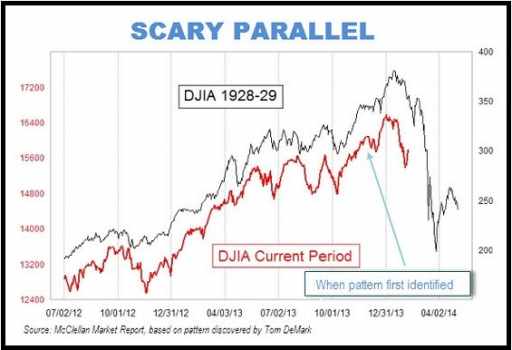 The shocking parallel confirms what one expert says is in store for our country and economy this year.

In a recent interview to talk about his New York Times best-seller Aftershock, Wiedemer says, “The data is clear, 50 percent unemployment, a 90 percent stock market drop, and 100 percent annual inflation… starting in 2013.”
Before you dismiss Wiedemer’s claims as impossible or unrealistic, consider this: In 2006, Wiedemer and a team of economists accurately predicted the collapse of the U.S. housing market, equity markets, and consumer spending that almost sank the United States.

When the interview host questioned Wiedemer’s latest data, the author unapologetically displayed shocking charts backing up his allegations, and then ended his argument with, “You see, the medicine will become the poison.”

The interview has become a wake-up call for those unprepared (or unwilling) to acknowledge an ugly truth: The country’s financial “rescue” devised in Washington has failed miserably.

The blame lies squarely on those whose job it was to avoid the exact situation we find ourselves in, including former Fed chiefs Bernanke and Alan Greenspan, tasked with preventing financial meltdowns and keeping the nation’s economy strong through monetary and credit policies.

At one point, Wiedemer even calls out Bernanke, saying that his “money from heaven will be the path to hell.”

But it’s not just the grim predictions that are causing the sensation in Wiedemer’s video interview. Rather, it’s his comprehensive blueprint for economic survival that’s really commanding global attention.

RELATED : Retirement Crisis in the History of the World -The next big crisis? Jim Rickards on financial panics

The video was initially screened for a relatively small, private audience. But the overwhelming amount of feedback from viewers who felt the interview should be widely publicized came with consequences, as various online networks repeatedly shut it down and affiliates refused to house the content.

Bernanke and Greenspan certainly would not support Wiedemer publicly, and it soon became apparent mainstream media would not either.

“People were sitting up and taking notice, and they begged us to make the interview public so they could easily share it,” said Newsmax Financial Publisher Aaron DeHoog. “But unfortunately, it kept getting pulled.”

“Our real concern,” DeHoog added, “is the effect even if only half of Wiedemer’s predictions come true.

“That’s a scary thought for sure. But we want the average American to be prepared, and that is why we will continue to push this video to as many outlets as we can. We want the word to spread.”