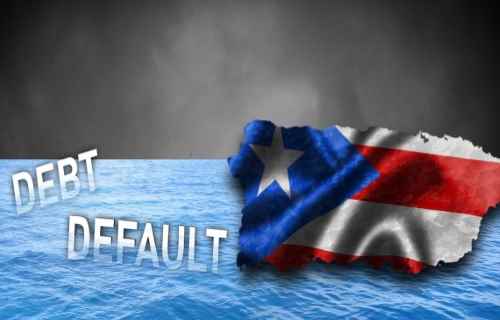 The Governor of Puerto Rico has announced that the Commonwealth, an American Territory (but not a state), will DEFAULT on its debts tomorrow, 2 May 2016.  Because Puerto Rico is not a state, it cannot avail itself of US Bankruptcy Laws and as such, this will become a VERY messy situation, very fast.

Bond Holders who lent money to Puerto Rico will then lay claim to “Credit Default Swaps” (CDS) a sort of financial “insurance instrument” which will trigger a required payout by the entities which issued those CDS, mainly Banks.  Trouble is, most of the banks don’t have enough money to pay the claims! Herein lies a very big risk of “contagion.” This could mean several significant-sized banks in the United States may fail within weeks.

If and when banks begin to fail, Bond Holders who lent money to those banks will then lay claim to THEIR CDS and that will trigger still more banks into default . . . and so on.  The potential exists for this single Puerto Rico default, to spread into one of the worst financial catastrophes to take place in modern history!

Is YOUR bank one of the entities which issued Credit Default Swaps?  Will YOUR bank be one that goes under?

Bear in mind that last October, US Financial laws changed so that there is now a provision in law which calls for banks to be “bailed-in.”  That means folks who have stock in failed banks, or who have bonds from those failed banks, LOSE THEIR MONEY to resolve the failed bank!  This is euphemistically called a “haircut” but for some investors, it’s a baldy!  Some investors get NOTHING.

Watch financial markets very closely this week.  If things go bad, they will go bad at lightning speed.  Too late for many people to get out and save themselves.

Outlet elnacional.com.do reports that aside from numerous owners of shuttered businesses returning from Puerto Rico, also doctors, engineers, nurses and many others who had spent many years on the island.

As an example, the outlet says, of the more than 300 Dominican businesses that sold food, drinks and other items in Rio Piedras, only 26 are still open.

They said the businesses that still survive won’t do so for very long, because sales have plunged more than 80 percent.

“There are many compatriots, mostly living without papers, that in order to return home, even had to go to the Dominican consulate in Puerto Rico for help,” said the returnee Petronilla de los Santos.

MAINLAND USA WILL SEE THIS AS WELL

When the 2008 financial crisis struck, the United States literally faced the exact same scenario as described above; but the US has cash printing presses and put them into overdrive!  By unleashing tons of cash into the economy, it propped-up things that SHOULD have failed.

The federal reserve euphemistically referred-to this as “Quantitative Easing” but in actual fact, it was printing cash and lending it at almost zero interest.

So banks borrowed, invested the cash in the stock market, which caused stock values to rise and people THOUGHT things were getting better.  They weren’t.  They were actually getting worse because market values became disconnected from profit and earnings reality.

What we have now is a stock market that has zero relation to corporate earnings, while banks and corporations have taken-on massive amounts of new debt to engage in all these stock transactions.  It’s literally a house of cards built on a foundation of mud.  When it begins to collapse — and the Puerto Rico default could very well BE that beginning — it will ALL come tumbling down and the United States will see the exact same collapse of economic activity that is described above by Dominicans returning from Puerto Rico.

Without fuel, trucks won’t be able to make deliveries, so supplies will start to run-out.  We’ll see empty grocery store shelves.  No food.   Society will all come crashing down.

Once that takes place, it will be only a day or two before civil unrest begins.

Hungry people, with no food will set things in motion.  There will be riots.  Break-ins, home invasions.  People will kill other people for food.

RELATED : What creates food crises? — How to Prepare For the Coming Food Crisis

There won’t be enough police on the planet to keep things from falling into anarchy.  When things get really bad, there won’t be any police AT ALL; they’ll be home protecting their own families!

Ladies and gentlemen, what is coming to America – and to the world – is an economic and social collapse so terrible that it will make “the Great Depression” look like a joke.

If you do not not have some food supplies to tie you over, some fuel to keep you going, and guns to protect yourself and your family, very many of YOU will not survive.