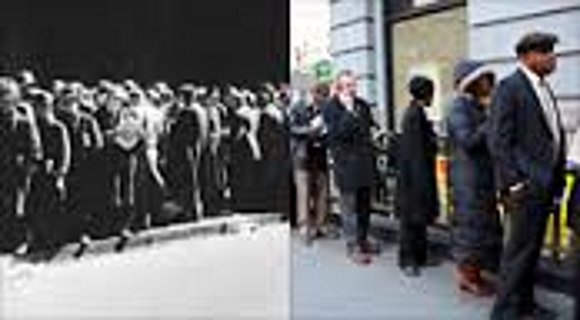 What Is a Recession?
First, let’s take a look at recessions. There are two definitions of recession: one defines a recession as two consecutive quarters of negative economic growth, and the second (according to the National Bureau of Economic Research (NBER)) defines a recession as a significant decline in national economic activity that lasts more than just a few months.

How It Works
The growth of our economy rests upon the balance between the production and consumption of goods and services. As the economy grows, so do incomes and consumer spending, which continues the cycle of growth. However, because the world is not perfect, at some point, the economy has to slow. This slow down could be caused by something as simple as an oversupply, where producers manufacture too many goods. When this happens, the demand for those goods will drop. This causes earnings to slow, incomes to drop and the equity markets to fall. (To learn more, read Understanding Supply Side Economics.)

Historical Examples
Since the mid-1850s the U.S. had 32 recessions, and according to the NBER, most have varied in length, with the average recession lasting 10 months. The shortest recession on record lasted six months, from January 1980 to July 1980. Two of the longest recessions lasted for 16 months. These were the recessions of November 1973 to March 1975 and July 1981 to November 1982.

What Is a Depression?
A depression is a severe economic catastrophe in which real gross domestic product (GDP) falls by at least 10%. A depression is much more severe than a recession and the effects of a depression can last for years. It is known to cause calamities in banking, trade and manufacturing, as well as falling prices, very tight credit, low investment, rising bankruptcies and high unemployment. As such, getting through a depression can be a challenge for consumers and businesses alike, given the overall economic backdrop.

How It Works
Depressions occur when a number of factors come together at one time. These factors start off with overproduction and decreasing demand and are followed by fear that develops as businesses and investors panic. The combination of excess supply and fear causes business spending and investments to drop. As the economy starts to slow, unemployment rises and wages drop. These falling wages cause consumers to cut back spending even more, putting additional pressure on unemployment and wages. This begins a cycle in which the purchasing power of consumers is eroded severely making them unable to make their mortgage payments; this forces banks to tighten their lending standards, which eventually leads to bankruptcies.

Historical Examples
Throughout history, there are several examples of depressions. The most well-known is the Great Depression of the 1930s. However, this one title actually covers two depressions that took place during that time. The first depression occurred from August 1929 to March 1933, during which GDP growth declined by 33%. The second depression ran from May 1937 to June 1938, during which GDP growth declined by 18.2%. In addition, the Great Depression was preceded by another economic depression, which occurred from 1893 to 1898. (source)

Ron Paul’s Warning: Big Changes Coming for the US Economy