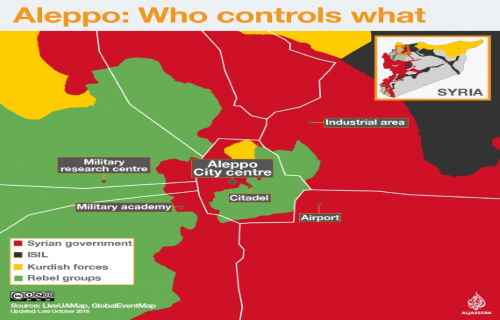 Russia and the Syrian army on Wednesday told anti-government rebels in Aleppo to leave by Friday evening, signalling an extended moratorium on air strikes in the city.

The Russian Defense Ministry, which is helping forces loyal to President Bashar al-Assad to retake full control of Aleppo, said rebels would be allowed to exit the city unharmed and with their weapons between 0900 and 1900 local time on Nov. 4 via two special corridors.

Civilians and the sick and wounded would be allowed to leave via six other corridors, it said.

The Syrian army released a similar statement later in the day calling on rebel fighters to cease fire and to “use this opportunity” to leave the city with their small arms.

Rebels rejected the calls, an official in an Aleppo-based insurgent group said.

“This is completely out of the question. We will not give up the city of Aleppo to the Russians and we won’t surrender,” Zakaria Malahifji of the Fastaqim rebel group told Reuters.

He denied there were corridors guaranteeing safe passage and said civilians did not trust the government side.

President Vladimir Putin had ordered the pause in fighting “to avoid senseless victims”, Russia’s Defense Ministry said, adding that Syrian authorities would ensure its troops pulled back from the two corridors designated for rebels.

Russia and its Syrian allies say they halted air attacks on Aleppo on Oct 18. Western governments said the strikes had killed civilians in large numbers, an allegation Moscow denied.

Humanitarian pauses designed to allow both rebels and civilians to exit the city have been organised by Moscow and Damascus before, but have largely failed amid continued violence with both sides accusing the other of stopping people from leaving.

A Kremlin spokesman said on Tuesday the moratorium on air strikes was still in force, but could not be extended if rebels in the city did not halt their attacks.

The Russian Defense Ministry said on Wednesday that rebels inside Aleppo had taken heavy losses during fighting and were effectively trapped.

“All attempts by the rebels to break through in Aleppo have failed,” the ministry said. “The terrorists have suffered heavy losses in lives, weapons and equipment. They have no chance to break out of the city.”

Two weeks ago, Russia dispatched its North Fleet from the Barents Sea and elements of its Baltic Fleet, to the Mediterranean off the coast of Syria.  Those ships and submarines began arriving Wednesday and will be fully arrived by late Thursday.

The presence of the Russian fleet provides enormous firepower; far more than has previously been deployed to Syria.  This firepower will make it possible for Russia and Syria to lay waste to Aleppo and all the rebels in it.

But the US is committed to the ouster of Syrian President Bashar Assad, because Assad is standing in the way of a natural gas pipeline from the Persian Gulf nation of Qatar, traveling ultimately to Europe.  This pipeline would lessen European dependence upon Russia for natural gas.

The question on everyone’s mind is whether or not the US/NATO will openly side with the Rebels and actively oppose Russia and the Syrian Government?  To do so would mean war with Russia . . .  and not just in Syria.

Russia has made clear that if NATO enters the Syrian conflict by attacking the Syrian government, war will break out and “it will be war everywhere.”  Meaning in Europe and against the mainland of the United States.

This is a dangerous time for the world.  One wrong move by any side could launch the world into a battle from which many of us would not survive.

The Russian foreign minister says Moscow supports a U-N plan that would allow Nusra Front terrorists to leave the Syrian city of Aleppo. In an interview with a Russian TV channel, Sergei Lavrov said Russia is ready to call on the Syrian government to let the terrorists leave Aleppo for Idlib province. On Thursday, the U-N Special Envoy for Syria urged al-Nusra Front terrorists to leave Aleppo. Staffan de Mistura stressed that he is willing to go to the eastern part of the city and escort up to a thousand Nusra terrorists out of the city. He warned that the militant-held eastern part of Aleppo could be destroyed by the end of this year if the fighting continues. Nusra Front has rejected the U-N envoy’s proposal, saying the group is determined to defeat the Syrian army in Aleppo.