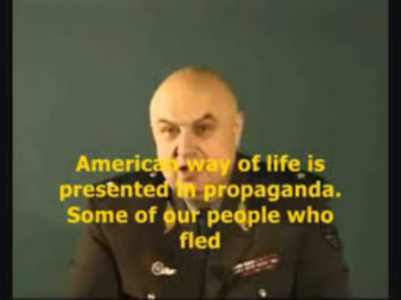 In the following video commentary Russian General Konstantin P. Petrov (Ret.) asks some interesting questions and includes his own thoughts (perhaps the non-official Russian position) about a variety of topics that include the end of US dollar hegemony, the orchestration of the 9-11 attacks to engage America in a mid-east war, the puppeteers behind the politicians and the coming premeditated collapse of the United States of America as we know it.

While here in the United States we remain enclosed in a propaganda bubble controlled by western multi-billion dollar media conglomerates, business interests and political alliances, there can be no doubt that other schools of thought exist throughout the world. What may seem like reality to our populace is perhaps nothing more than illusion.

The United States does not exist in a vacuum. As such, we simply cannot ignore the assessments, outlook and opinions of foreign leadership as they pertain to the global implications of current events.

How did they ruin the USSR? They called the Soviet Union a ‘prison for people’ and an ‘evil empire’.

The same thing is being done to the United States.

We also intervened in Afghanistan and do you remember how that ended? It’s the same thing with the United States, and the American can’t do anything there. Now the entire muslim world hates the United States.

And when the global mafia dumps the dollar the entire world will think that the Americans deserved this. But this won’t benefit people in our country, especially those who’ve been saving up dollars.

There’s another thing that we should take into account.

…Some of our people who fled to the US, and now live there on welfare, live better there unemployed than they would have lived in Russia even if they were employed.

The slave masters think that this situation in the US is unacceptable because even the slaves live relatively well there.  so the United States is doomed too in this sense.

The USSR collapsed and the same fate has been prepared for the USA.

Coming Chaos: No Banks, No Public Facilities, No Food and Rampaging Gangs of Desperate People

1 thought on “Russian General: “The USSR Collapsed and the Same Fate Has Been Prepared for the USA””