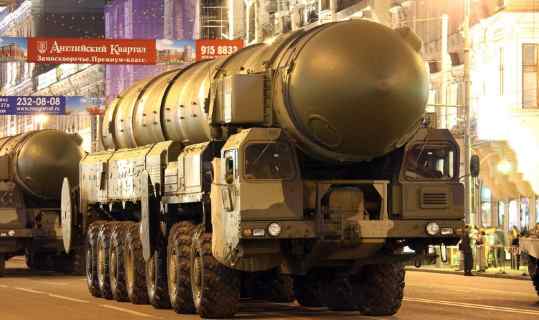 After an all-night meeting with Russian security officials, Putin decided at dawn on February 23 to prepare the return of Crimea to Russia. Fearing that far-right Ukrainian nationalist militias would attack the largely ethnic Russian population of Crimea and the strategic Russian naval base at Sevastopol, Russia mobilized forces it stationed in Crimea, under the terms of Russia’s lease of the Sevastopol base.

The Crimean population ultimately voted to rejoin Russia, and pro-Kiev forces in Crimea did not resist and were allowed to escape Crimea unharmed. “We monitored the situation and had to bring in our equipment,” Putin said. “They would have been wiped out after the first salvo.”

According to Putin, however, as the Kremlin and the Russian military began their planning, they did not know whether NATO would react by going to war: “This could not be understood immediately, therefore at the first stage of work, I was accordingly forced to provide guidance to our Armed Forces. And not just provide guidance, but issue direct instructions, orders regarding the possible conduct of Russia and our armed forces given any development of events.”

Putin said he was ready for “the most adverse development of events.” As the interview makes clear, this referred to all-out nuclear war with NATO. The Kremlin prepared to arm its nuclear forces, Putin said: “We were prepared to do this. I was talking with Western colleagues and saying to them that [Crimea] is our historical territory, that Russian people live there, that they were in danger, and that we could not abandon them.”

He later added, “As for our nuclear forces, they, as always, are in a state of full combat readiness.”

The implications of Putin’s statement that he prepared Russia’s army for any possible development are staggering. Washington has always refused to issue a so-called “no first use” pledge not to launch a first nuclear strike. It must be assumed Russia’s nuclear forces were placed on a hair trigger, prepared for a full-scale response to signs of a US-led NATO nuclear attack on Russia.

While the details are naturally classified, such a response would involve mass launches of Russian missiles in minutes, before they were caught on the ground and annihilated by incoming NATO missiles. Thousands of missiles—each far more powerful than the US bombs that destroyed Hiroshima and Nagasaki in 1945, killing hundreds of thousands—would rain down on army bases, industrial infrastructure, and communications and control centers across North America and Europe.

Putin’s remarks confirm the warnings made by the World Socialist Web Sitethroughout the Ukraine crisis. In the midst of the US provocations following the crash of Malaysian Airlines Flight MH17, the WSWS wrote, “Are you ready for war—including possibly nuclear war—between the United States, Europe, and Russia? That is the question that everyone should be asking…”

From the beginning, the driving force in the Ukraine crisis has been the intervention of Washington and Berlin to back a putsch against pro-Russian President Viktor Yanukovych and install a far-right regime in Kiev. This has been part of a broader, aggressive agenda for asserting US hegemony over Eurasia that poses the risk of a nuclear conflagration threatening the survival of humanity itself.

The response of the Putin regime to the imperialist offensive, based on nationalism and the defense of capitalist property, is reactionary and politically bankrupt. The corrupt Russian business oligarchy that emerged from the restoration of capitalism in the USSR in 1991 is incapable of appealing to mass opposition to war internationally. It oscillates between threatening nuclear war and seeking an accommodation with imperialism.

The TV interview suggested that Putin initially faced pressure from the Russian military for a more aggressive course of action. It cited reports from the Russian Defense Ministry that “military specialists” proposed using “all available means” to demonstrate Russia’s readiness to defend itself.

In the interview, however, Putin downplayed the crisis. He said, “Despite the complexity and dramatic nature of the situation, the Cold War has ended, and we do not need international crises like the one in the Caribbean [the 1962 Cuban missile crisis]. All the more so since the current situation has not prompted the need for such actions, and that would contradict our own interests.”

Even as Putin charged Washington with plotting the Kiev putsch and laid out Russian fears of nuclear annihilation at the hands of NATO, he grotesquely referred to US officials as “our American friends and partners.”

In fact, if anything, the situation is more dangerous now than during most of the Cold War. Last year, a London think tank issued a report stating that, amid the NATO military buildup in Eastern Europe after the Kiev putsch, forty “near misses” brought NATO and Russian planes close to direct conflict. The German news magazine Der Spiegel and former Soviet premier MikhailGorbachev have warned of the risk of world war.

The aggressive role of imperialism is highlighted by discussion in US ruling circles of adopting a policy of aggressive nuclear war. This was summarized in a 2006 article by two professors, Keir Lieber and Daryl Press, in Foreign Affairs, the US political establishment’s leading foreign policy journal.

“It will probably soon be possible for the United States to destroy the long-range nuclear arsenals of Russia and China with a first strike,” they wrote. Due to the disintegration of Russian infrastructure after the restoration of capitalism, Russia had only a few nuclear bomber bases or mobile missile launchers; its ballistic missile submarines largely spent their time motionless in port. These could all be obliterated by a massive, preemptive US nuclear strike.

Washington could now contemplate a preemptive nuclear strike to disarm Russia and China, according to Lieber and Press. Citing computer models of nuclear war, they wrote that a “surprise [nuclear] attack would have a good chance of destroying every Russian bomber base, submarine, and ICBM.” They added that China’s nuclear arsenal, lacking mobile land-based nuclear missiles or effective ballistic missile submarines, “is even more vulnerable to a US attack.”

They did also note, however, concerns about such a policy in some US foreign policy circles: “Russia and China will work furiously to reduce their vulnerability by building more missiles, submarines, and bombers; putting more warheads on each weapon; keeping their nuclear forces on higher peacetime levels of alert; and adopting hair-trigger retaliatory policies… [T]he risk of accidental, unauthorized, or even intentional nuclear war—especially during moments of crisis—may climb to levels not seen for decades.”

Putin’s remarks on the Ukraine crisis make clear that such risks have indeed come to pass. The nuclear arms race is intensifying in line with the risk of war.

Before the US and Russia formally announced that they would end their collaboration on nuclear disarmament in January, the Obama administration unveiled plans last year to spend more than $1 trillion in upgrading the US nuclear arsenal.

Russia and China are also pouring billions of dollars into their nuclear arsenals, hoping to develop the ability to deter a US first nuclear strike. Russia has begun a comprehensive modernization of its nuclear arsenal that is expected to come to fruition early in the next decade. The proportion of nuclear missiles housed on mobile launchers is expected to pass from 15 to 70 percent, and Russia is launching a new Borei class of nuclear missile submarines.

These developments underscore the immense dangers to the population of the entire world produced by the reckless and incendiary operations of US imperialism. The question of nuclear war is not simply a theoretical possibility, but an increasingly immediate danger. This danger must be answered through the building of a powerful movement of the international working class, based on the perspective of international socialism.

Are you ready for a major war? Expect economic collapse. Expect martial law. Expect a breakdown of society and mass food shortages. How to Prepare for War