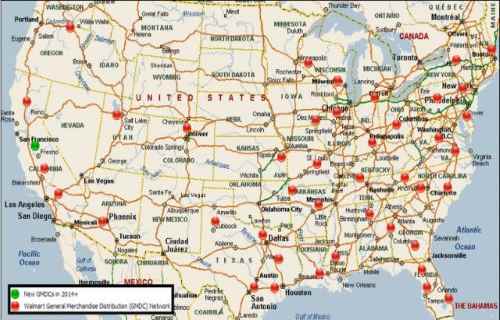 MWPVL did an in-depth study of Walmart’s distribution centers and the conclusions are staggering as to what they can do and what they are up to. If one was to want to control food and medicine distribution and create an artificial shortage designed to get the needy to turn themselves into a FEMA camp to obtain critical resources, Walmart is your place. Here is a list of Walmart distribution centers across America. More support for the idea that the military/DHS will use a private contractor to control the use and release of critical resources (i.e. food and medicine) comes from a quartermaster report entitled Distribution and Supply Chain Management: Educating the Army Officer A Monograph by Lieutenant Colonel Mark E. Solseth U.S. Army, Quartermaster.

This very lengthy analysis described the Army’s transition from a mass-based logistical system to a distribution-based system which matches Walmart and Sams Club. It also discussed supply chain management from both a military and commercial perspective. The dots are connecting in a very disturbing manner.  Dave  Hodges

According to Dave Hodges’ latest article, we are in for big trouble very soon. Dave says he has sources, reliable contacts, and information that nearly proves this will happen very, very soon!

He writes, “A string of coincidences occurred, yesterday, to produce some undeniable conclusions which could very well have very dire consequences for millions of Americans.”

But it doesn’t end there. Hodges also states that Jade Helm is back, but this time, with a vengeance, now known as Unconventional Warfare Exercise 16 (UWEX 16).

The information and facts shared by Hodges is, in my opinion, unquestionable. And, it lines up perfectly with the things which must happen in order to fulfill end times Bible prophecy.

Hodges adds, “Jade Helm is back and it is back and it is back  with a vengeance. Jade Helm 15 has morphed into Unconventional Warfare Exercise 16 (UWEX 16). UWEX 16 is about fighting a civil war against rogue American troops who will, presumably, not go along with the imposition of tyranny under the banner of the UN flag with the complicit support of foreign troops. There is a new twist to Jade Helm 16 (i.e. UWEX 16).”

RELATED : A Disturbing Series of Events: Governments Around the World Seem to Be Preparing for War

RELATED : Is Martial Law Coming to the United States? All the Signs Indicate It’s Coming Soon; Here Are Facts That You Should Know About

Hodges received a disturbing email. He says, “I have learned from reliable sources that Jade Helm 16 is also about controlling the shipment of all food. If one thinks this sounds outrageous, stay tuned, because the circumstantial evidence clearly points in this direction.”

His investigation was initiated when he received a very disturbing email, which is included in the video.

He goes on to add, “Since the beginning of 2016, I have received several confirmations that indeed  UWEX 16 is in part about controlling the distribution of food as well as protecting against a guerrilla attack upon food distribution centers which will be controlled by Wal-Mart and Sams Club under the auspices of DHS.”

For the full story, please check out the feature video. The details of the video are literally chilling!

URGENT WARNING! The Greatest, Most Tragic Event Ever Prophesied In Our Day Coming This Year? It Is Estimated 35-40 Million People Will Die! It Is Time To Repent and Prepare-God Will NOT Be Mocked! (Shocking Videos and Confirmations)