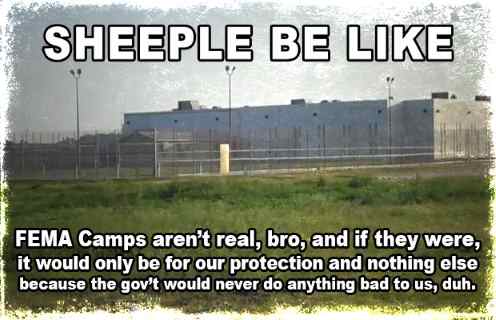 Martial Law has already been established on paper, and a Supreme Court Justice now warns that the nation’s highest court would back executive orders to intern Americans, as it did during WWII.

Senior Associate Justice Antonin Scalia, the longest serving justice of the Supreme Court who has been on since the Reagan Administration, predicted that the Supreme Court would someday back moves by the federal government to intern Americans under martial law, citing the landmark Korematsu v. United States decision that upheld FDR’s Executive Order 9066 to round up and hold Japanese Americans in camps during WWII.

Never mind that this is blatantly in violation of the rights of Americans; time of war makes the laws fell silent Scalia cautioned.

“You are kidding yourself if you think the same thing will not happen again,” Scalia told students at the University of Hawaii law school. “That’s what happens. It was wrong, but I would not be surprised to see it happen again, in time of war. It’s no justification but it is the reality.”

Is Scalia right? Could it happen?

It already has been established, as far as on paper and in the preparation/contingency matrix for the Continuity of Government (COG). Power will be transferred to cadre of of Shadow Elite with a vague relation to the chain of succession outlined by the Constitution (and numerous supporting entities and agencies). Presidents Bush and Obama have bothcontributed significantly to the growing emergency powers declared and assumed by the executive branch over the years.

Just look at the atmosphere that took place after 9/11 – where the Bush Administration passed the draconian Patriot Act, established Homeland Security, beefed up TSA and waged both a broad, vague War on Terror and a narrower war in Iraq – all based on lies sold to the public under a heightened atmosphere of fear. Add to that the internment that happened at the Superdome during Hurricane Katrina and the other contingency plans for crisis. In 2008, Congressman Brad Sherman claims that such threats of martial law were made ahead of the vote for the Bailout and ensuing economic crisis.

How quickly would the Obama Administration or a future president use the powers of Executive Order to hold Americans in actual camps in the event of future crisis – be it natural disaster, false flag terrorism, economic collapse or wider war?

This question is particularly pertinent, given that acts of legislation such as H.R. 645 have been introduced to establish ‘National Emergency Centers’ for times of crisis and that hundreds of facilities in major metropolitan areas across the country have been designated for use as FEMA camps and readied for mass population processing and control… these authors have covered several of these facilities and relevant drills, and the intent is becoming very clear.

Justice Antonin Scalia’s comments only serve as further warning that this things may be coming to pass. May the individual people of America remain vigilant and true to our principles.

uncover the deceptions, pierce through the fabric of illusions, know the real enemy, unshackle from the system, and begin to imagine the path towards taking back our lives, one step at a time, so that one day we might truly be free…

The Dangers of the Common Good